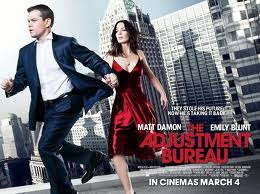 I sum up this movie in one word: “INCREDIBLE”

With The Adjustment Bureau, although I’d seen posters for it, nothing really pulled me to research it. All I knew was that it starred Matt Damon and Emily Blunt. To be honest, I don’t even physically remember requesting this movie, so when I came across it, I just shrugged with a “why not” attitude.

It started off a bit dull – a young, charismatic front-runner in an election campaign, effing up at the last minute due to something he’d done back in his even younger and stupid days. How many times have I seen that in a movie? But then I started wondering why Matt’s character (David Norris) was being portrayed as so young? What was it about him that had made so many people want to vote for him?

Heh, I soon found out his political career had nothing to do with the move! Well, it did in a way…but…read on…

This was more, so much more than a political movie. At the heart of it was a gut-wrenching love 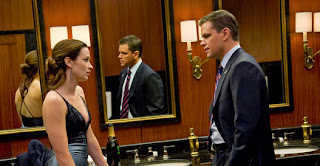 story. Cue my writer’s happy-ever-after-loving wheeeeeee! Basically, the powers that be - “the adjusters” or angels in men in black suits, had been tasked with keeping David Norris's career on track no matter what.

His destiny, laid out on some funky moving paper tracker thingy, was supposed to be “adjusted” so that it absolutely did not collide with Elise's (Emily Blunt’s character) for the simple reason that their love would impede his intended meteoric rise to become President of the United States.

So he was given a choice – lose the love of his life or watch her lose the one thing she yearned for most – to be the incredibly amazing dancer she was.

At first he arrogantly believes he can have his cake and eat it and boy, does he try hard to! But when the very thing she cares about it threatened, he makes the hard choice.

He gives her up. For a while. But fate being what it was, she crosses his path again. And the fireworks really kicks off when his “guardian angel” tells him that Elise is about to marry someone else.

My heart was in my throat the whole time he was evading the “the adjusters” in order to get to his true love. I cried when he got his girl. And cried even harder when the big boss, “The Chairman”, finally agreed to let him keep her because…well…their love was just too damn strong.

I defy any romance reader or writer to watch this movie and not be moved or inspired to let your fingers fly over your keyboard after your very own happy ever after.

I'v not even heard of it Maya, but I REALLY want to see it after reading that. Im like you, I IMDB everything to see if it's worth watching before wasting time, this one sounds terrific. I love Matt Damon too, he has that likeablity factor doesn't he?

Sold! I saw the poster too and thought . . . meh. But the trailer?!? Awesome. Will def check this one out. Thanks, Maya!

Jo, you definitely should! It's one of those gems that makes a dull day seem brighter, you know? Let me know what you think :)

Damon and Blunt's chemistry is what makes this film work so well, the only problem is that the plot just doesn't know what to do with itself to make it interesting in 99 minutes. Nice Review! Check out my site when you can!

Like Jo, I'd never heard of this movie until I read your post. Will check it out now.

I'm right with you, Maya! Awesome movie, best adventure romance I'd seen in a long while. Loved reading your review :)