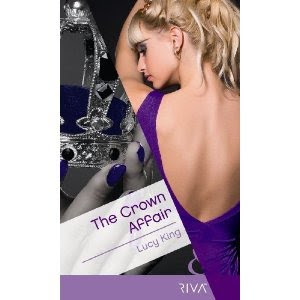 This week we're delighted to welcome Riva author Lucy King to the blog and to hear all about her latest release "The Crown Affair".


Haphazard, but hopefully getting less so the more books I write. I’d like to be able to claim that the characters and the story pop fully formed into my head overnight, but I can’t. When I first started writing, I’d open up a document without a hint of an idea and hit the ground running. While initially quite liberating, I’d find myself speeding off in completely the wrong direction and continually having to go back and rewrite, which was very inefficient and extremely frustrating. Now I spend at least a week mulling over ideas and characters and making copious notes about them (although while I might have some idea of a plot it’s only ever very vague). Then, once I’ve made a start I send my editor as much as she can stand – usually the first chapter followed by Chapters One to Three – and she gives me feedback. If I could, I’d send her the lot paragraph by paragraph!

On a day to day basis, I have a spreadsheet with dates and word count targets and days blocked off when I know I’m not going to be able to write, which keeps me more or less in line. The days I delete more than I write I ignore.

I live in Spain, a country where my feet are practically double the average size, so shoe shopping is isn’t something that tempts me away from the keyboard. Plenty of other things do, though, and when it gets really bad, I have been known to iron bedsheets. But as I’ve found that the longer I stay away from my wip, the more difficult it is to get back into it, I try to keep going and write through the pain. Having said that, when I do step away I often find that I’m refreshed from not having looked at it for a while so (depending on where I am deadline-wise) I try not to beat myself up about skiving!

I believe it exists, but haven’t suffered from it yet. Thank goodness.

Hmm. Good question. Several of my books have an initial spark that comes from a real life story. My first book came about after as a result of watching a Top Gear interview on TV. Say It With Diamonds, which is out in January 2012, was inspired by a newspaper article I read online about the history behind a jewellery collection.

My current release, The Crown Affair, opens with the heroine ogling the hero with a pair of binoculars, which is a very liberal adaptation of something I’d heard had happened in real life. And apparently the village in which the story starts, whose name I thought I’d made up, actually exists and is very close to where my parents live, which I think was a bit of a surprise.

So far nothing has got me into trouble but it’s early days!

In pretty much every way. As I’d never imagined being published I had no idea what to expect. While in many ways it’s fabulous (here I’m thinking of the lunches, the fan-mail and the email that tells you your book has sold) for me, there’s also the issue of meeting expectations – deadlines, revisions, delivering a book the editor and readers will love. I live in constant fear of not meeting those expectations!

I’m on Facebook and Twitter, I blog and I try to keep my website updated. I’m sure, though, I could be doing more (any tips very welcome...)

I suspect I’m the last person who should be giving promo tips! (see above)

To get to know the characters inside out before starting and to make sure that what they do is consistent with their personalities. And to focus on the romance, which you might think was obvious! But the first draft of this book had characters who did nothing but bicker all the time and was littered with plot devices. There was a broken leg (not very conducive to nookie), a kidnapping (because I wanted one) and sub-plot involving stolen public money. What was I thinking?!

Finishing it. Honestly, this was a tough one. I sent in the manuscript a few weeks before my son was born and received revisions just afterwards. When I say revisions, it was actually a complete rewrite, and sorting it all out while dealing with a new-born (my first) was quite a … um... challenge. Having said that, once I got on the right track, it was a joy to (re)write. I reread it when I received my author’s copies, and loved it - I hope others do too!

My hero’s the ruler of an isolated Mediterranean island. As he’s young, hot and royal, he’s a target for the paparazzi, so it would have to be somewhere where there are no reporters and no photographers. His manor house in the Cotswolds would be perfect.

I think the different covers and the more interesting titles in both the Modern and the Riva lines are fantastic, although I will admit to having a tiny weeny soft spot for ‘the clinch’, and both reflect both the content a lot better. The re-branding hasn’t changed the way I write – I just carry on writing stories with characters I love. In fact, my January 2012 book, Say It With Diamonds, is actually being released as a Modern (a marketing decision), although being very Riva.

I think it’s really hard to define, as there isn’t any one thing that identifies a book as a Riva. There’s a contemporariness to a lot of them and humour and wit in many, but mainly I think it’s the voice of the author. The heroes and heroines in the Rivas I’ve read are people I could imagine hanging out with.

Thank you so much for having me on the Minxy blog. It’s been great to be here (and sorry if I’ve gone on a bit!)

Not at all Lucy, thanks for a fab interview :-)

Close encounters of the Royal kind!

After being made redundant and finding her boyfriend in bed with another woman, Laura's decided it's time to take charge of her life! However, the last thing she expects is the new Laura to end up having wild, naked fun with the gorgeous guy next door…

Okay, she virtually runs away afterwards in shame—but so what? She soon gets a new job—on the Mediterranean island of Sassania, no less! But the island has a new king—aka Laura's guy-next-door! Now they're both in trouble, for King Matt should be focussing on affairs of the state, not be intent on re-igniting a hot affair of his own…

Oooh, sounds like another fabulous read from you, Lucy! Will definitely move this to the top of my TBR pile!!

I'm going through a painful writing period. It's nice to know I'm not alone. Excuse me, I'm off to iron the bedsheets...

I love the cover of your book, Lucy. And the title, too. Thanks so much for gracing us with your lovely presence :)

Hope you like it, Aimee! And Lacey, in the fabulous online community of romance writers, you are never alone ;)

Maya, it's an absolute pleasure to be here. Thank you for inviting me.

Loved this interview - your voice and personality really shines through (at least I think it does, but I haven't actually met you so not sure)! Can't wait to read the new book and well done you for rewriting just after having a newborn! I'm in awe!

It's a great cover and I love the title! Thanks for doing the interview Lucy :-)

Ah, Rachael, if only I could go to RWAus...! Thanks, Lorraine, for the fab questions.