How much fun can one girl have?

Since none of us Minxes managed to get to Caerleon for this year's RNA conference, we've invited debut Mills & Boon author Scarlet Wilson to guest blog about the conference this weekend instead.


It didn't start well.  The train to Newport in Wales was packed with a variety of dogs and children crawling down the aisles.  At one point I ended up with two unknown babies sitting on my lap. However once we arrived in Newport I recognised some fellow women scrambling with cases and shared a taxi with the lovely Freda Lightfoot to Caerleon.

Jan Jones and Roger Sanderson spend a lot of time organising the conference and their planning was very evident.  There was a huge range of topics covered in tee programme and the hardest thing was picking what to attend.  I have to say that this year I was naughty and ducked out of a few lectures through sheer brain drain.


But the ones I attended were fab.  The conference started with Celebrations and this year there were a lot of members with good news of sales.  It seems great that when we continually hear about tightening purses and less income, writers are still considered a priority.  There was an award winning panel with Louise Allen, Elizabeth Chadwick and Jill Mansell all answering questions on how they wrote.  I was amazed to learn that Jill Mansell writes all her books longhand with a Harley Davidson fountain pen!  I was even more amazed when Fiona Harper (who writes for Mills and Boon Romance) pulled out her moleskin notebook from her bag and showed me that she writes long hand too - her next book was sitting right in front of me.  I nearly snatched it and ran away!

The Mills and Boon editors delivered a talk on being Unpredictable - their latest buzzword.  They want new twists on the old stories and are still keen to acquire new authors.


Sphere books also delivered a talk, they are also acquiring authors - admittedly only a few a year - but specifically asked for timeslip stories and WW1 and WW2 women's fiction.

Jenny Hutton and Anna Baggaley from MIRA and Mira Ink gave an overview for their line, highlighting all areas that sell well in women's fiction and teenage fiction.  They also have new websites www.mirabooks.co.uk and www.miraink.co.uk

My favourite talk was given by Fiona Harper on getting emotion on the page and keeping it there.  You could have literally heard a pin drop in the room while she was speaking.  She has promised to put her notes for the talk on her website www.fionaharper.com

The conference ended with agent Carole Blake and her client Elizabeth Chadwick letting us know how they were 'A Perfect Match'.  Their working relationship has lasted longer than Carole's two marriages and they were a true doubleact!

It was a perfect end to a great conference and after the long journey home to Scotland I am now going to spend the next few days in bed recovering! 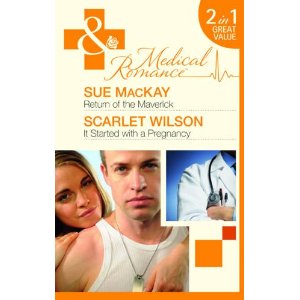 Thank you Scarlet! The Minxes look forward to meeting you again next year, at the Penrith conference.

Scarlet's debut novel for M&B Medical is It Started With a Pregnancy, out in September. Scarlet will be back here in September to talk about her book.

So lovely to be able to put a face to my editor's name. Thanks for the report Scarlet!

I knew I'd forget something! Remember the Mills and Boon Community online debate about infidelity being used in stories? It created a number of strong opinions. Apparently early next year both Nikki Logan and Soraya Lane deal with this issue in their books! Looking forward to reading them x

Fantastic report, Scarlet! It was lovely to see you and I have to report that my feet did indeed suffer in those killer shoes.

Thank you Scarlet. Have to admit I am pretty green right now, particularly when I heard Jill Mansell was there this year; how exciting for you to be attending this time as a bought author instead of queuing for an editor pitch :-)

Hey lovely! Thanks for being our roving reporter, top job. Sounds and looks like a good time was had by all, and have to say I love tour scarlet clothes colour theme - lovin' your style lady!

Fantastic report on the conference, Scarlet. Very interesting to know that there's some more stuff coming from Fiona and on the cheating front, I must admit I find that one a difficult concept in M&B...