Today we're thrilled to welcome multi-published, talented author, Saskia Walker, to the Minx spotlight. We know she'll be right at home here. Take it away, Saskia!

2. Where did you get the idea from for this particular book?
THE HARLOT and associated stories were inspired by a visit to the East Neuk of Fife in Scotland. This is an area of the Lowlands that has a dark and extensive history of witchcraft and persecution. The paranormal folklore there is intriguing, and the landscape and its legacy stimulated all sorts of ideas.

3. Where do you hope to be in 5 years time?
Writing great cross genre stories that make readers happy! Happy readers is my goal. :)

That would be any of Kresley Cole's Immortals After Dark series! She's an awesome writer with immense vision. I love where she takes us with her characters.

5. Was there any particular author or book that made you want to be a writer?
Yes, a British fantasy writer called Storm Constantine had a huge influence on me. Storm has a vivid imagination and writes characters that I can really relate to, no matter how fantastic the setting. That's key to me, if I engage with a character I can believe in I follow them wherever they take me in their world. I'd already had the dream of writing, but Storm is an author who encourages others. With her vibrant writing as inspiration and her personal mentorship, I took my first tentative steps on this journey.

6. Promotion is no longer a dirty word. How do you strive to reach as many readers as possible?
I find promotion tough. Honestly, it's really hard to push myself out there and talk up my books. I'm getting a tad braver, thank goodness! I try a little of everything, advertising, blogging, social networks. I can safely say that Good Reads is where I feel most at home. It's a really valuable social network for authors because we are engaging with avid readers actively looking for books.

Standing in an airport and realizing that I didn't want to get on the plane for a two-week vacation, because I'd fallen for the man I was leaving behind. I'd looked forward to that damn trip so much, and all of a sudden it was meaningless, because I'd had my first date with the love my life the night before. Inside a heartbeat I learned how much I would give up, just to be in his company. It was a profound moment, shocking and thrilling and incredibly romantic. That was over eleven years ago, and I'm still every bit as much in love with him, if not more -- and I'd still give up everything I own for another hour with him!

8. What do you wish you'd known about being an author before you were pubbed?

Ha, that a lot of patience is needed! I knew it would take hard work and that I had a lot to learn. I'm a practical sort and I also realized that as a self employed person I would have to drum up motivation for myself, each and every day. What I didn't know is that everything takes a loooooong time and there's a lot of waiting involved. It's very easy to wish your life away when you're a writer -- waiting for the next publication, waiting to hear back on a sub, waiting to see what readers think of a book. I try to distract myself from all of that by throwing myself into new projects all the time.

9. What's the best writing advice you've ever been given?
The best promo is to write the next book. 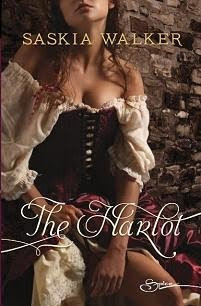 The story is a very lusty, bawdy tale! The central characters, Jessie Taskill and Gregor Ramsay, are both wily loners, wary and self reliant because of what life has thrown at them. Jessie is a whore under a charge of witchcraft, and Gregor has returned to Scotland looking to regain what was taken from his family over a decade before. Initially their relationship is built on a business arrangement, but desire soon gets in the way.

Gregor rescues Jessie from the gallows and hires her to get close to his enemy, but right from the outset these two are far too distracted by each other. Jessie is alluring to Gregor, and she would much rather seduce her attractive sponsor than learn about his enemy. Each thinks they have the upper hand on the other, especially when it comes to sex. Inevitably they become close, learn of the tragedies that went before, making way for companionship and love. But with enemies and witch hunters close by, their journey is a bumpy one.

It is a Dark Era, one when a lusty lass will do what she must to survive. Even if it means bartering flesh for a palmful of coins...

Forced to watch her mother burned at the stake and separated from her siblings in the aftermath, Jessie Taskill is similarly gifted, ripe with a powerful magic that must stay hidden. Until one night when she's accused by a rival, and Jessie finds herself behind prison walls with a roguish priest unlike any man of the cloth she has known.

In reality, Gregor Ramsay is as far from holy as the devil himself, but his promise of freedom in return for her services may be her salvation. Locked into a dubious agreement, Jessie resents his plan to have her seduce and ruin his lifelong enemy. But toying with Gregor's lust for her is enjoyable, and she agrees to be his pawn while secretly intending to use him just as he is using her.
11. What’s next for you?

I'm about to begin work on THE LIBERTINE, and THE JEZEBEL, the follow-up books to THE HARLOT. These two books are the stories of Jessie Taskill's long-lost siblings, Maisie and Lennox. The siblings were torn apart as children when their mother was burned at the stake for witchcraft. They've had completely different lives, but the heritage of pagan witchcraft is in their blood and the need to find each other again is strong. They are passionate, gifted people, living in a time when one hint of witchcraft brings the death penalty. Each story is both an adventure and an erotic romance. As the three siblings live and love they also find their way back to each other. The reunion of the Taskill witches will be at the end of the third book. All three novels are scheduled for back-to-back mass-market publication on the HQN line, early in 2013. I'm very excited about the writing of books two and three!

Saskia, love the premise! Can't wait to read all three.

What a VERY romantic moment. Sounds straight out of a good book. Your story sounds awesome too and I LOVE that cover!

I got chills reading this blurb! This is definitely a book I'll be looking up. Good luck Saskia, and thanks for visiting here today.

Your most romantic moment brought a lump to my throat (in a good way). Wow! Really, being a writer after that was the only profession for you, wasn't it? Thanks for going minxy for a day. Looking forward to reading your book :)

Aimee ~ thank you for commenting, I'm so glad you liked the premise! I'm working on the second book now and loving every moment.

Rachael ~ for me that is the essence of romance, that moment when you realize how hard you've fallen. :}

Maya ~ aww. That's adorable, thank you so much. I appreciate your comments.