Look who won our Hot Scotsman Poll - and look how pretty.... 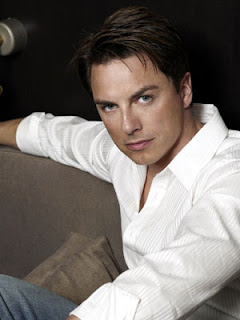 Anyone who knows me will understand how delighted I am with this outcome. And the win has inspired me to relive my night with John Barrowman (unfortunately, there were about 2,000 other people also there, but we'll gloss over that).

My party sat happily in our third row seats and could almost have reached out to touch him. A lovely friend had suggested that we might be close enough to smell him - alas, not quite. But we were close enough to see that he looked as though he would smell nice.

He sang his little heart out. And his energetic dancing resulted in a pair of split trousers that revealed a pert behind, clad in only the softest, whitest cotton. Even though I'm not entirely sure it wasn't deliberate, the audience screamed in delight at the sight of his - very clean - underpants.

Audience participation seemed the order of the day. A woman sitting behind us shouted that she loved JB - then lamented that it was a wasted dream. Another woman, sitting next to me, danced in her seat all night and stopped only to shout her opinion that JB should take his torn trousers off.

The show was being filmed for a DVD. I immediately decided to panic in case I was in the finished product. I don't look good in videos - as opposed to in my own head where I look like Cindy Crawford.

Having now watched said DVD, I can confirm that the only part of me visible is my arm. And my arm could be the identical twin of Cindy Crawford's arm.
Posted by Suzanne Ross Jones at 3/28/2011 05:57:00 PM

Email ThisBlogThis!Share to TwitterShare to FacebookShare to Pinterest
Labels: John Barrowman, Man of the Month poll

I'll look out for your CC arm when the DVD comes out :o)

What a scrummy picture. I think I understand now why you choose to live in Scotland, Suz.

He got my vote! Lovely!

With and without it, Sally.

You've found me out, Romy.

Shame he's gay btw - some women would relish the challenge to see if they can turn him ;)
x

Very true, Debs. Sadly I think it would be an impossible task with JB - but it would be fun to try.
XX