I am delighted to host author Leigh Michaels here today. Leigh started her career with Harlequin Romance, and has since published nearly 100 books, including non-fiction, historical and contemporary romances, and On Writing Romance, a must-read book for all aspiring romance writers. She is also a co-founder, with Rachelle Chase, of the Chase the Dream contest.

Thank you very much to Leigh for joining us here at the Minxes today, to talk about her latest book, The Mistress' House.


* * *
1. Where were you in your writing career 5 years ago?
Totally burned out! After writing eighty sweet traditional romances for Harlequin, I’d said everything I had to say, and going to work in the morning was no longer fun. So I figured it was time to stop – and I moved on to other things (including editing and publishing other people’s books through the small press my husband and I own, and teaching more classes at Gotham Writers’ Workshop.)


2. Where did you get the idea from for this particular book?
I was co-sponsoring a writing contest with a fellow author and she challenged me to meet the conditions of entry – capture her attention in the first 1,000 words of a romance and make her want to read more. If it was fair for us to set that rule for entries, she said, it was only fair to live by it ourselves. And she suggested I try something completely different from my usual sweet traditional, too. So I wrote the first 1,000 words of a sexy historical short story, just to prove that I was not hidebound or behind the times. That short story eventually turned into The Mistress’ House.


3. Where do you hope to be in 5 years time?
I’d really like to be the Georgette Heyer of the 21st Century – writing lively, witty, fun social comedies set in the Regency period.


4. Which was the last book you read that you wish you'd written?
Self-Editing for Fiction Writers, by Renni Browne and Dave King. They’ve done a terrific job with explaining the basics of fiction writing at a level that beginners can understand but experienced writers also find enlightening.


5. Was there any particular author or book that made you want to be a writer?
I got hooked on Emilie Loring when I was in junior high school – she wrote fun romances that usually had a mystery or puzzle included. And of course Georgette Heyer.

6. Do you find writing love scenes giggle-worthy or cringe-worthy?
Eye-rolling-worthy, actually. I always have to take several stabs at each love scene so it has both detail and emotion and doesn’t cross the line into purple prose. And making each one different – yeah, there’s a challenge!


7. What's the most romantic moment of your life so far?
A few years ago I was away from home, teaching at a writers’ festival, when my husband got the news that his cancer diagnosis was a lot worse than we’d expected. A friend drove him to the hotel where I was staying, and when I came in from class he was there in the lobby. He started to run to me, I dropped everything and ran to him – it was one of those Hallmark movie slow-motion moments. (Fortunately, despite the bleak prognosis, he’s still here and kicking 12 years later.)


8. What do you wish you'd known about being an author before you were published?
How important it is never to stop for the day at the end of a scene or a chapter! It’s so satisfying to have finished, and it’s so tempting to quit there. But it’s much harder to get started the next day when I’m facing a blank page.


9. What's the best writing advice you've ever been given?
“Never believe your own PR.” – Jacqui Bianchi, Editorial Director of what’s now Harlequin Mills & Boon. Jacqui was my first editor and she was a published author herself. While there’s nothing wrong with being proud of our achievements, no matter how great a review is or how many copies a book sells, an author is only as good as her next book. 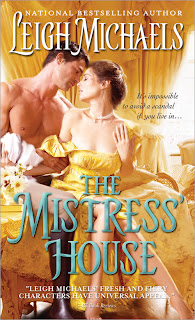 10. Tell us about your latest release.
The Mistress’ House is a sexy Regency set in 1815 London. The Earl of Hawthorne buys a modest town house around the corner from his own mansion, intending to stash his mistresses there (one at a time, of course) – but the first woman he brings to the house captures his heart. Then his new countess loans the house to a friend, who also finds love while living there… and at last the earl hides his ward in the house, and she, too, meets the man of her dreams. It’s three stories, but it’s not an anthology because the stories weave together.

11. What’s next for you?
I’ve written two more sexy Regency romances. Just One Season in London, which comes out in July, features the Ryecroft family – young Viscount Ryecroft, his sister Sophie, and their mother, as they all try to marry well not for their own comfort but to make life easier for the others. Then in November The Wedding Affair comes out – the Duke of Somervale’s sister is getting married, but the guests at this country-house wedding have anything but marriage on their minds. All of my Regencies are triple stories, with the heroes and heroines interacting across the story lines.

Wow Leigh, almost 100 books? That is awe inspiring. Thanks for visting with us today. Your romantic moment really touched my heart.

Great inteview. Nearly 100 books is nothing short of amazing!

Your romantic moment gave me chills. To have a love like that...*sigh*. Wonderful. I'm glad he's still here for you.

Thanks for the advice to aspiring writers, Leigh. Your romantic moment is out of movies, but I'm also glad he's still here.

All the best with your new book.

Leigh, that's fantastic advice about never stopping for the day at the end of a scene or a chapter - you're right, its so satisfying to stop there, and so terrible to get back into it the next day!
How fantastic to have written so many great romances, and to have risen to the challenge of writing different too.
I'm so glad your husband is well.
Thanks for such an inspiring interview! Oh, and because I'm in Ireland, Happy St Patrick's Day.

Hi Leigh!
I'm glad your husband is still kicking! (Hopefully not at night!) I will make sure not to believe my own PR. And your book sounds wonderful! Thanks for sharing!