It's that time of the week and once again we're thrilled to welcome another author, Jasmine Black to the blog. Jasmine also happens to be one of my CP, so please extend a very special welcome to her.

Take it away, Jasmine...

Where were you in your writing career 5 years ago?
Oh, boy. I was just at the start of my romance career. I’ve known my whole life that I wanted to write but I never really knew what. I tried poetry, greeting cards, children’s books…you name it. But my mother-in-law introduced me to romance books in 2004 and I was hooked. In 2005 I decided to try writing a romance novel. And it just clicked.

Where did you get the idea from for this particular book?
I’m not really sure, but I had this thought that I wanted to write a story with a fireman hero. The only plot that would come to me was a charity auction for a date with the firemen. Okay so that has been done and done time and again. No other plot would come to me. For some reason this was my hero’s plot. But how to make it fresh? Then when I start to think about writing a M/M romance the fireman jumped into my mind. He started telling how he was gay and right before the fireman’s charity auction, he came out. There was a big story in the paper about how a gay fireman was participating in the auction and the story just took off from there.
How did I get the idea of writing a story about a fireman? Of course firemen are sexy. I had never done one. Never even thought about it. I have plenty of cop stories. So one day I was out of town to visit family when there was this bucket shake going on in the street. And Lord, there were all these hot and sexy firemen taking money. Oh, my! I just knew I had to write one. I guess it took Wade a bit to confide in me his story, but I am so glad he did.

Where do you hope to be in 5 years time?
I hope in five years from now I’ll have a nice size backlist and a group of avid followers. I would love for readers to email me and tell me they enjoy reading my work. I would also love to have a YA book in print. I have started it, but I haven’t had time to work on it lately. So I hope one day my vision for this YA book will be fruitful.

Which was the last book you read that you wish you'd written?
The Warriors’ series. I could have so written about cats. I have way too many of them. Plus, I love the books. Great reads. hehe.

I’ve always wanted to write even though I didn’t read much as a child. I do remember being sucked into The Little House series one summer as a child. And as a teen I loved V.C. Andrew. But I think I really wanted to write romance when I fell in love with.

What's the most romantic moment of your life so far?
I’ve had flowers given to me, been proposed to and taken to nice restaurants, but I have to say this popped in my head when I read the question. I’m going to get a bit personal here. My hubby and I didn’t marry for love. We married because we had a kid together, lived together, and it was the next logical step. The first year of our marriage was a living H E double L. I have never met a man so selfish in my life. He would spend money on himself like crazy without ever thinking of me or the kids. But things changed. One, we lost a large chunk of income. And two, we grew to love each other. So it was a couple Christmas’ after we got married and we were low on cash. I had this old stove that one burner worked good, one so-so and the other two not at all. For Christmas that year my hubby gave me a brand new flat top stove. He had been saving a bit of money from each check for months to give me a new stove. To me, that was the most romantic thing of my life. For months he had given up little things like the soda and candy bar everyone gets so he could put money back and surprise me. I will never forget that.

It’s only one opinion, don’t give up. You know it took me five years to fully comprehend this. Really. I’d already published stories before I really got this. It hit me one weekend as I was reading a couple of short stories from one publisher. As I read three or four stories from the same house it hit me that while I liked the stories, mine would never work for this publisher. Not that it’s a good or bad thing. Just that this publisher produced a certain type of story. I got to thinking after that because my plots usually break a rule of romance writing somewhere, somehow. I kept getting rejected from the same houses. And the rejects were on the lines of, your writing is good, but your story is not for us. And it is true. Publishers and editors are only people with an opinion of what they like to read. Just because one editor doesn’t like your writing style doesn’t mean no one will. So don’t give up. And if you really want to publish with a certain house, then gear your story to that house and what they like. I finally did contract with one of those houses, but only after I discovered what they wanted and gave it to them. 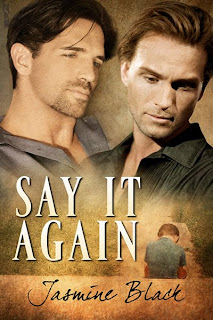 I just had a new story, Say it Again, come out Aug, 28 from Silver Publishing. This story just tears at my heart and leaves me thinking about the characters for days after I read it. It’s my first attempt at M/M romance too.

One month before the annual fireman’s charity auction, fireman, Wade Hartman announces he’s gay. This year when he strolls down the catwalk, he wants to leave with a man. When the only bid he receives is a pity bid, Wade’s crushed, but he lets his friend take him to dinner anyway.

Real estate conglomerate, Jared Kessler’s loved Wade for years. So when he reads the article about the fireman’s charity event, he knows he has to be the winning bidder. Mistaken as an unwanted bidder, Jared refuses to give up. He wants Wade, if only for one night.

One innocent dinner turns into fiery passion. But one night isn’t enough for Wade. He wants Jared for real. The more Wade pushes, the closer he comes to discovering the deep, dark secrets of Jared’s past. Can love conquer Jared’s fears or are his wounds too deep for even love?

What’s next for you?
I think I might write a few more M/M romances. But I do intend to still write M/F. I have two stories contracted with future release dates. I don’t have any characters pressing me right now to tell their story. Hopefully someone will speak up soon, but in the meantime I have plenty of editing to keep me busy.

You can keep in touch with Jasmine by visiting her blog: http://www.jasmineblackromance.blogspot.com/
Link to Say It Again - here
Posted by Maya Blake at 9/08/2010 09:00:00 AM

Hi Jasmine! Thats a great blog post, thank you so much for joining us minxes today! I've never read an M/M romance, but your story sounded so enticing, I'm off to silver publishing to check it out! Your romantic moment was true romance too, a man knowing what you need and giving up something to give it to you is true love.

Hey Sally and the rest of the minx, thanks for having me over today.

I've had a few good reviews for Say it Again by readers on goodreads. This was my first shot at M/M as well. The rest of my stories have been M/F. But I had this story in my head and it had to be told. It still tears at my heart just thinking about it.

I have to rush off to work soon, but I will be back later tonight. So if anyone has a question, just ask and I'll answer as soon as I can. I hope everyone has a wonder day.

Thanks for visiting here today Jasmine. You're just heading off to work, and I'm just heading home. Isn't the internet such a wonderful place to bring us all together?!

Two things in your interview really struck me. The first was how romance writing just 'clicked' for you. It did for me too!

And second was your own true romance. There are just so many stories out there of marriages that don't workut, so hearing about one that succeeded in spite of all the odds really gives us all hope. And it's just given me a great idea for a story ...!

Like everyone else I have to say I'm intrigued...

Hi Jasmine! We've certainly come a long way since the RWC days and it's so great to have you here today. Your true romance story touched me too :)

What a wonderful true romance story. It's encouraging to read a real account of how love works in someone's life. Thanks for sharing.

Wow! Thanks for all the comments.

Maya, yes we have come a long way since then. But I needed that time to grow and I hope to keep growing with each new release.

Romy, so glad I could help. I'd love to hear your idea. Drop me line at myersk49@yahoo.com if you'd like to share. Or you could keep it to yourself.

I'm glad that my true story touched hearts. I tried to achieve that in each of my fantasies, but to hear that my true life touched someone is great to know. And BTW, me and hubby are still going strong.