Once again the Minxes have scored an interview with a Harlequin Author, this time it's the divine Nicola Marsh. Anyone who follows her on Twitter knows how warm and wonderful she comes across and it's a thrill to have her here with us today! And we couldn't resist putting these minx questions to her:

Where were you in your writing career 5 years ago?

Wow, 5 years seems like a lifetime ago! Hmm…2005…my first 3 books hit the shelves in 2004 so I guess I was a green newbie, trying to get a handle on promotion and deadlines and revisions and the ever-changing publishing world. Oddly enough, I still feel that way now…

Where did you get the idea from for this particular book?

DESERTED ISLAND, DREAMY EX! is part of Harlequin Romance’s new ‘The Fun Factor’ series and my editor wanted something modern, something fun so I put my thinking cap on and…landed on reality TV! Reality shows are everywhere, a constant form of TV entertainment these days so I thought it would be a good starting place for a story. Twitter is another current trend, so I played around with the story: reality TV documentary, 2 ex’s being stranded on an island, tweeting and blogging to win the competition…the end result is this book I really enjoyed writing it and hope readers will love it just as much.

Where do you hope to be in 5 years time?

I’ve currently written 25 books for Harlequin so I’d like to aim for that magical 50. I’m also dying to be published in mainstream fiction so hopefully I would’ve had a trilogy of mainstream books out by then. I like to aim high :)

Which was the last book you read that you wish you'd written?

Barbara O’Neal’s ‘The Secret of Everything.’ No surprise this wonderful book recently won a RITA. In fact, I wish I’d written all her books, she’s that good.

Not really. I always wanted to write because it was fun at school and I thought it would be a super cool job yet I never considered it as a career. Cue 13 years of working as a physiotherapist when I finally followed my heart and guess what? You can make a career out of a dream!

Do you find writing love scenes giggle-worthy or cringe-worthy?

Neither. In fact, I find them the hardest to write because you want to get the emotion and the physical connection between your characters just right. And those scenes especially need to be fresh and different for each book. One reader recently asked me on a forum how I make my love scenes so unique because they are refreshingly different in all my books and that was a huge compliment. My response? I let the characters in each book guide me. Characters are different between books so the way they interact, in and out of the bedroom, will be different too.

What's the most romantic moment of your life so far?

My hubby proposing on New Year’s Eve at the stroke of midnight while we were high up in the Sheraton Imperial hotel in Kuala Lumpur, watching the fireworks. Aww…

That the hard work never stops. In fact, once you’re pubbed it gets harder! With each book published the bar is raised, so you need to keep achieving or topping your last effort. Also, the waiting never gets easier, promotion is a continual time suck and rejections still come your way and sting just as bad as they did before.

Write what you love. I see too many writers trying to follow trends to get published but you know something? By the time you jump on an old trend, a new one has been created. Why not create a new trend yourself? 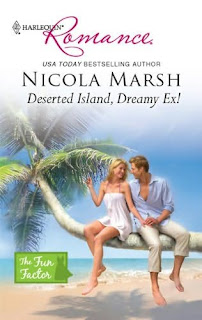 Hmm…I’ve already mentioned the reality TV and Twitter angle of DESERTED ISLAND: DREAMY EX! (Harlequin Romance Sept 2010). So what else can I tell you?

The hero, Jared Malone, is an Aussie tennis champion and a real charmer (Nathan Fillion was the inspiration, need I say more?) The heroine, Kristi Wilde, is a PR whiz who wants the perfect wedding. Then why does she have 2 broken engagements to her name? You’ll just have to read the book to find out :)

What’s next for you?

My next release is a Harlequin Modern Heat, WILD NIGHTS WITH HER WICKED BOSS, out this December (little known fact: this book will be one of the last Modern Heats as in January, Mod Heats re-launch as a new series, RIVA.)

Set in Alaska, it features Rhys Cartwright (who appeared in his brother Callum’s story, OVERTIME IN THE BOSS’S BED in June this year), a park naturalist who runs luxury wilderness tours.

When Jade Beacham does a stint as a tour guide in Alaska, she never expects to fall for her boss. Her future is in Melbourne, his is in Vancouver. How will the two get to follow their dreams and their hearts?

Thanks to the Minxes for having me, I’ve had a ball!
Nicola

For more information on how to keep in touch with Nicola or where to get her books, visit:

I love the sound of 'Deserted Island, Dreamy Ex' Nicola, definitely a fun idea. I listened to a contemporary audiobook the other day and the characters didn't even have mobile phones, it was really annoying!
Thanks for being on the blog today :-)

So great to have you here today, Nicola. I love the idea of Deserted Island, Dreamy Ex! I could certainly do with being stranded on some island right about now :)

I thought that said 'naturist' for a second then, rofl! Now that really WOULD have been pushing the boundaries!

Thanks for a fabulous interview, your MH books are always something I look forward to getting my hands on.

I'm really looking forward to "Dreamy Ex". We live in a rapidly changing world and I love books that at least try to keep up!

lovely interview, Nic, and great to see you here. I particularly love your romantic story.

I love writing contemporary books, Lorraine, taking a modern scenario and putting a twist on it.
Fun!

lol, Joanne!
Though he does get his gear off several times...!

So glad you enjoy my MHs :)

This books sounds absolutely yummy - perfect combination of modern life and romance. I'll have to head off to the shops at lunchtime to grab myself a copy.

Well done on the originality of the plot. Sounds awesome.

Can't wait to read those books - they sound terrific.