Congratulations to Jackie Ashenden who wins a free download of "Pleasured by the Viking" and Jennifer Shirk who wins a copy of "Surrender to an Irish Warrior". Congrats, ladies! Please contact Michelle directly at michelle@michellewillingham.com to claim your prize.

Now over to Intrigue author and one of Eharlequin's best sub care cheerleaders Paula Graves. Links to Paula's recent releases are at the bottom of the page--both were given a whopping 4 and a half stars by Romantic Times Book Reviews.  Here's Paula:

Where were you in your writing career 5 years ago?

I was waiting to hear if my Daphne du Maurier award entry would win at Nationals (it came in second) and wondering if I would ever sell a book.

Where did you get the idea from for this particular book?

The series I'm writing at the moment, Cooper Justice, came out of a discussion I had with a friend. I was trying to come up with an idea for a series, and my friend, a big Harry Potter fan, said, "You know, I've always thought the Weasleys could have carried their own series." From there, I created the Cooper family--six brothers, one sister--and gave them their own world to inhabit. They're not really anything like the red-haired wizarding family, of course, except the number of siblings and their happily in love parents. The Burrow is actually a lakehouse in northeastern Alabama, and instead of wizards, the Coopers are either law-enforcement types or professional fishermen. Or both. The hero of ONE TOUGH MARINE, my August book, is Luke Cooper, a retired Marine who's working as a security consultant when his past comes back to haunt him in a big way. And the hero of September's BACHELOR SHERIFF is youngest brother Aaron Cooper, a sheriff's deputy who finds himself protecting the geeky girl he used to ignore in high school.

Where do you hope to be in 5 years time?

I hope to be writing exciting, passionate, scary books. I'd like to think I'll still be writing for Harlequin Intrigue, since it's been a fantastic experience over the past five years. I'm surrounded by some amazing authors at Intrigue, and I'm so pleased to be part of them. I may have a single title book or two in me, of course, and I may be doing that. But right now, I'm just focusing on telling the best stories I can.

Which was the last book you read that you wish you'd written?

Kerry Connor's June 2008 Harlequin Intrigue, STRANGERS IN THE NIGHT. Fantastic book full of twists, turns and really meaty drama. I couldn't put it down and every time something unexpected happened, I thought, "Darn, I wish I'd written that."

The Nancy Drew, Hardy Boys and Trixie Belden books made me want to write mysteries, and Lilian Peake's Harlequin Romances made me want to write romance. When I discovered Harlequin Intrigue, and especially Gayle Wilson, I realized I really wanted to write romantic suspense. I loved Gayle Wilson's books and wanted to write like her--great stories written in an almost literary voice. Just lovely, lovely writing.

Do you find writing love scenes giggle-worthy or cringe-worthy?

What's the most romantic moment of your life so far?
Gosh, I don't know. My idea of romance seems to be so different from everybody else's. I think if a guy offered to change the litter box for me every day for a month, I might marry him on the spot.

I had been working at getting published so long by the time it finally happened, I think I was pretty much prepared for being a published author. I haven't really come across any unpleasant surprises. I am struck, however, by how wonderfully supportive fellow authors are. Okay, there's one other thing--I always put a whole lot of blood, sweat and tears into figuring how to write a synopsis before I was published. I still think it's a good skill to have, but even if you're terrible at synopses, the way I am, you can still sell a book.

Start a scene as late as possible and end it as soon as possible. If you follow that rule of thumb, 99% of your pacing problems will be fixed.

Tell us about your latest release

I have two releases, back to back in August and September. August's book, ONE TOUGH MARINE, features a Marine widow with a young son who's confronted with her late husband's shadowy past in the form of ruthless men who want her to find something her husband hid. With no idea what she's looking for, the widow, Abby, must turn to her late husband's best friend, Luke Cooper, for help. They haven't seen each other in almost three years, and their last meeting was an explosion of grief and passion the night of her husband's funeral. What Luke doesn't know is that their lovemaking created a child--a son who's now a pawn in a very deadly game.

September's book, BACHELOR SHERIFF, features Aaron Cooper, a newly promoted investigator for the sheriff's department, who's called to look into a suspicious fire. He discovers the arson victim is an old high school classmate, Melissa Draper, who barely escaped the fire alive. Melissa was a geeky braniac, the kind of person a football star like Aaron had usually ignored in high school. But the deeper he looks into the suspicious circumstances of the fire, the more mysteries he uncovers. And all of them seem to revolve around Melissa, who is a far more interesting and complicated person than Aaron ever realized. When it's clear someone's trying to kill her, Aaron appoints himself her personal bodyguard. But is his interest in her strictly professional?

What’s next for you?

I have three more Cooper Justice books coming out April, May and June of 2011. Then in October 2011, I'll be the author of the fourth book of the six-book Daddy Corps continuity from Harlequin Intrigue. After that, I'm going to have to come up with a new project!

Paula has generously offered a $10 eGiftcard from the online bookseller of the winner's choice, winner to be picked from a random commenter so get busy commenting people :-) The winner will be announced on the blog at the weekend. 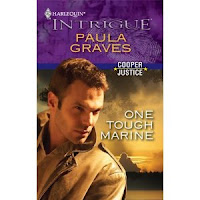 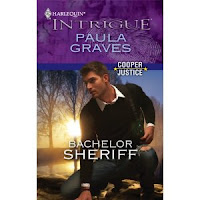 I love the sound of the Coopers Paula, you completely sold me on the idea of basing them on the Weasley structure. The burrow is my ideal house, lol!
I hear you on the litter box too - that is one job I really really hate, so any man who does that is a keeper in my book. :o)

Hey Paula, great to have you here today! Your "best advice" is absolutely priceless and so easy to remember. And I agree, the Cooper Justice series sounds amazing!

That writing advice is definitely going up on my wall - it's great. I love Harlequin Intrigue too and I can't wait to read some of the Cooper Justice series.

Paula: I LOVE the fact that your mom beta reads for you!

I love your writing advice and your series sounds great.

The writing advice is fab. One Tough Marine really has me hooked, it's going to have to go on my list to be read :-)
Thanks for visiting the blog.

Hi Paula, lovely to have you on the blog today! OOH, tough, strong, protective alphas. My knees are going weak just thinking about them. Straight to the top of my 'to buy' list!

I've been so sad because my iPhone wouldn't work and I had both of these books on my Kindle app. Now it works again and I can read, yaaaaayyy!!

Thanks for visiting, Paula.

I love the books putting on my TBB list.

I love that the Coopers originated from a Harry Potter conversation of all things :) I never would have guessed! I love the your writer's advice Paula! Fantastic interview!

Thanks, everyone! I'm sorry I've been absent all day--I'm dealing with a nasty, nasty stomach virus and spent most of the day lying on the sofa moaning. Feeling a little better at the moment, so I wanted to stop in and say hello and thanks for all the comments!

Oh yuck, hope the bug is leaving you alone this evening. Get better soon, Paula.

Sorry to hear you're not feeling well, Paula. Here' wishing you a speedy recovery.

I love how you came up with the concept for Cooper Justice. It's nice to know I'm not the only writer who makes up alternate stories about characters I've read in other people's books.

Sincerely hope you're over the nasty virus now, Paula!

That's terrific advice, Paula, thank you for sharing it.

Thanks everyone for your kind words. I've been feeling pretty sick since Tuesday afternoon, but today I've felt a lot better and was able to catch up on a lot of work that didn't get done while I was sick, so I feel much more myself today and hope to go back to work at my day job on Monday ready to roll.

I'm glad some of you seemed to have gotten a lot out of my words of advice. I have a few articles on my website about writing issues that have meaning for me and, I hope, other writers as well, so feel free to drop by www.paulagraves.com and click on the "Extras" link to find the articles. Maybe there'll be a few thoughts that will inspire you.

Thanks again! Reading your comments helped raise my spirits quite a bit this week.