I don't normally do book reviews, mostly because I don't think I'm very good at it. But I just had to attempt a review after reading about Abby Green's The Virgin's Secret!

I started reading as way to pass a quick hour before I had to cook dinner. Dinner never got cooked. My kids went to bed after a hastily prepared sandwich *baaaaad mother!*

But this book hooked me from the first paragraph which set up the fireworks sooo astonishingly beautifully (yeah, it deserves two adverbs), I just couldn't put it down.

If you haven't read it yet, I'll try and give you the skinny without giving the story away (I hate it when reviews do that!). 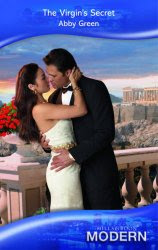 Angel Kassianides' family have owned up to a terrible secret after generations of laying the blame on the Parnassus family and as a result they're outcasts in Athenian society.

Leo Parnassus has returned from New York to head up the family and bristles and broods from the outset in a way only a hawt, sexy alpha hero can.

But Leo is different. He's never set foot on Greek soil, speaks Greek with a New York accent and this makes him vulnerable. Angel on the other hand, even though she's half-Irish, is Greek through and through. Their first meeting (when they don't know they're enemies) is fiery without being combustible, but their second meeting sets off the fireworks within the volcano in a way that had me turning the pages with indecent haste!

The conflict is set up beautifully and you can't help admire Leo for the cunning way he sets up Angel to fall into his bed like a ripe, succulent peach. Of course, discovering she's a virgin sends him down the slippery to falling in love, but even that is done beautifully.

If there's one minor complaint about this book, it's the "eavesdropping" device which is used in part to bring about the black moment. Abby used the same technique in her Ruthless Greek Boss, Secretary Mistress, which is the prequel (I believe) to The Virgin's Secret.

Although this threw me out of the book (long enough to make a much-needed cup of tea) I was truly rooting for Angel to get her man and for Leo to win her hand, which he did admirably.

If you haven't read it yet, do, you won't be disappointed.

With this book, Abby Green has moved one step closer to my 'autobuy' list!

Fab review! I have no idea why its not already in my TBR pile :)

You picked a goody there, Maya!

It's a great book (inhaled it some time ago) and Abby Green's not disappointed me yet. Keep up the good work Abby!

I'm currently in London, sharing a hotel room with Abby Green. She's just nipped out to get her hair done, so obviously I'm going to be hiding the laptop and making sure she doesn't see this or she'll be insufferable for the rest of the day. But yes, I quite agree, dammit. It was an absolutely fantastic book.

(But did you read her sheikh this summer? Oh my life - one of my all time top five Moderns, no question.) (Just don't tell her I said that, OK?)

You won't be disappointed, Lacey, it's really fab!!!

Hi Rachel, yes she is! I've recently discovered another Abby Green in my TBR pile and I'm waiting for a free hour or two to dive into it :)

Lol, India. Hmmm, it is a dilemma isn't it? Tell her and let her be insufferable all day or keep it to yourself ;). What's the title of the sheikh book? I'd love to get my hands on it! And no, I won't tell her you told me. Of course, if she reads the Minx blog, then, really, it's out of my hands :)

And not only is Abby talented she's also a lovely person too! 'Waves'. Go on, India. Tell her. She'd tell you!

Hello there! Thank you SO much for such a lovely review Maya - are you sure that India Grey didn't pay you? ;-). She did show me the review in the end but don't worry - I wasn't allowed become too insufferable. We're having a lovely time in London meeting up with other M&B authors.
Sally nice to see you! We really do have to arrange some kind of meet up in Dublin soon..!
Maya -the Sheikh book is called 'Breaking the Sheikh's Rules' and it was published in an anthology called Summer Sheikhs a couple of months ago...it should be on amazon - unfortunately I don't have any spare copies at the moment...
x Abby

You're welcome, Abby. It was a really lovely read. Glad you're having fun in London and thanks for giving me the title of your book. It's now on my list :)