Today is the official release date for Knight & Stay!

In actual fact it hit Amazon a couple of days earlier than planned ~ it snook out whilst I was sleeping. Typical huh?

I woke on Saturday morning to lots of tweets from lovely stateside buyers telling me they were already reading it, and from there on things have snowballed pretty fast.

I am giddy, thrilled and crazy excited!

Knight & Stay is the sequel to Knight & Play, the story of what happened when Sophie Black, ordinary girl, goes to work as PA for the anything but ordinary Lucien Knight.

It ended on a big old cliff hanger, and that's where Knight & Stay picks up the story. 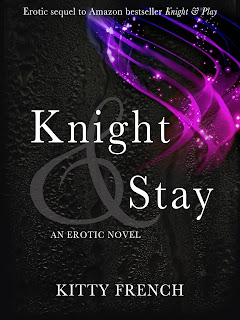 
About Kitty : Kitty French is the alter-ego of minx of romance Kat French, romantic comedy author.


Knight & Stay is available right now on Amazon, and coming soon to other e-retailers.

I've said it a million times over the weekend, but it's worth saying again, Congratulations, Kitty!!

Ditto! Congrats Kitty, am very proud of you :-)