I'm very pleased to welcome the lovely Sally Quilford onto our blog today. Sally's was one of the first writing blogs I came across and she is a talented and prolific writer as well as an encouraging and gifted writing teacher.

As well as answering our questions and telling us about her new book, Sally is also offering today a free download of her novel, Bella's Vineyard. Details at the end of this post.

1. Welcome, Sally. Please tell our readers a little bit about yourself.

I was born in South Wales and moved to Derbyshire in my teens. As a result Derbyshire makes a regular appearance in my stories and novels. I live with my husband and four westies. I’m a mother of two and a doting grandma (I’m not saying how many grandchildren because every time I think we’ve reached the definitive figure it goes up!)

I left school at 15 with no qualifications, then in my thirties I decided to go back to ‘school’ I achieved a 2.1 degree in Humanities with Literature, which gave me the confidence to become a writer.

I’ve been writing since 1995, but only started taking it seriously in 2007, when I decided I was no longer going to work for free. I earned £10 that year for a letter in Woman’s Weekly. Deciding to work for pay really helps to focus on getting things right. Since then I’ve had countless stories published in women’s magazines and anthologies, and I’ve had 10 pocket novels published by DC Thomson. I am also a columnist with Writers Forum magazine, with my monthly Writing Calendar column and my semi-regular Love Notes column. I have also had articles published in Writing Magazine and The New Writer.

Hang on, I need to count up. 10 pocket novels (to date), three with Siren under my usual pen-name and two under my ‘erotica’ pen name and now this one with Pulse. I think that’s sixteen, and that doesn’t count those I’ve self-published and the novels I’ve written which stay (quite rightly) on my hard drive.

I feel a failure as a woman for admitting it, but it’s not shoes with me. It’s books and DVDs.  Though having recently lost quite a bit of weight I have been having fun buying new clothes!  I keep at it because not writing makes me feel very miserable. I have to feel productive and creative and when the words aren’t flowing, I hate it. So sometimes I know I have to force those words out. When things get too bad, I tend to go back to old stuff and edit it. It’s amazing how working on editing an old book can free to mind to find new ideas.


4. What is your top promo tip for other authors?

Don’t just use your blog, Twitter or FB to push your books. I’ve unfollowed/unfriended people who post nothing but links to Amazon or their published work all day. You need to engage with others, and not just about writing. Take an interest in what they’re doing, even if it’s only clicking ‘like’ on their posts.  Yes you have to network as a writer, and there are times you need to set promotions. That’s how you’ll sell books. But try not to be too needy and spend all your time begging people to buy your book(s).

No I don’t, though I may do something writing related every day, which includes running my online workshops or working on edits and promotions. Or I could be chasing up markets or competitions (not for me but for my Competition Calendar).

I don’t subscribe to the notion that writers *must* write daily. You’re not expected to work every day in any other job (or if you are, you’re with the wrong employer!) so why should you write every day? I realised the other day that I hadn’t had a Saturday off for quite a while, and when I did, so that hubby and I could work our way through Game of Thrones Series 2, I felt guilty. Yet in all that time of not having time off, I felt I hadn’t  I very quickly gave myself a slap and told myself that I deserved to have a day off at least once a week. Not having a day off from anything writing related made it feel too much of a slog, whereas it shouldn’t feel like that, and I’m sure it’s the reason I didn’t really settle to anything.

But really I can only write if I have a story to sell, unless I’m doing commissioned work like my articles.


6. Is there a book you haven't written yet that you're dying to? What genre?

How long have you got? I’m full of ideas that haven’t gone anywhere eor which I just haven’t been able to start. There is one I’ve had in my mind which is a YA/Time Travel novel/Trilogy. The hard part for me is taking time off from writing the pocket novels (which earns me regular money) for long enough to write it. I also want to write a straight crime novel. There may be romance in it, as I’m a romantic fool at heart, but it won’t be the main story as in most of my books.


7. Could you be friends with any of your heroines?

I think it’s important that I would want to be, because a heroine should always be someone who the female reader wants to go for coffee and cake with (or whatever the western equivalent is). Also, there is something of me in all of them. Or at least they’re nicer, slimmer, prettier versions of me. I guess any heroine is the person the writer and the reader would like to be.

8. Have you ever written a hero you'd be happy to run off with?

Again, I think it’s important that I would want to, and the reader wants to, so the answer is yes, all of them. I must admit that my favourite so far those is Vittorio d’Este in Command Performance. My heroes always have the sort of attributes I would want a man in my life to have, except heroes don’t leave their smelly socks around or the loo seat up. But Nate in Lonesome Ranger is pretty wonderful too. He’s inspired by 1980s mini-series king, Peter Strauss, so form an orderly queue ladies…


9. At what point in your career did you actually start to feel like you were a writer?

I know that it shouldn’t be that you’re only a writer if you get published. If you write, then you’re a writer. But being published gives some validation to what you’re doing. Having said that, I sold my first short story, then didn’t sell anything else for two years, so that was a stark reminder that editors wouldn’t be hammering down my door. I think it was more when I was asked to be a columnist for Writers Forum magazine, because then I was not only a writer, I was someone who the editor believed had something to say about writing.

10. Do you have any tips, tricks or sacrificial rituals you do when you hit a story roadblock?

Just keep writing your way through the block, even if what you’re writing seems to be rubbish. That’s what rewriting and editing is for. I find writing lots of dialogue is really helpful in getting a story out of the doldrums. My characters end up having very lengthy conversations, in which they sip lots of tea or other beverages. I cut most of it when I go back. But it does help to move the story on.

Jane Wenham-Jones also mentions a good method in her Wannabe a Writer? She calls it the ‘Mind The Gap’ method. In that if you hit a snag but have a later scene in mind, simply put something like THIS IS THE PART WHERE FRED AND NORA FIND THE DEAD BODY and then go back to it later. Though do remember to go back. I was told the story of one writer who, on reaching a sex scene typed PUT TWIDDLY BITS HERE, then forgot to go back and change it and sent it to her editor just like that!

On the other hand, if a story really isn’t working, you don’t have to keep going. Put it aside, start something new and then keep the other idea for another time. My hard drive is full of half-finished novels and stories. In some cases, it’s only the first chapter of a novel. 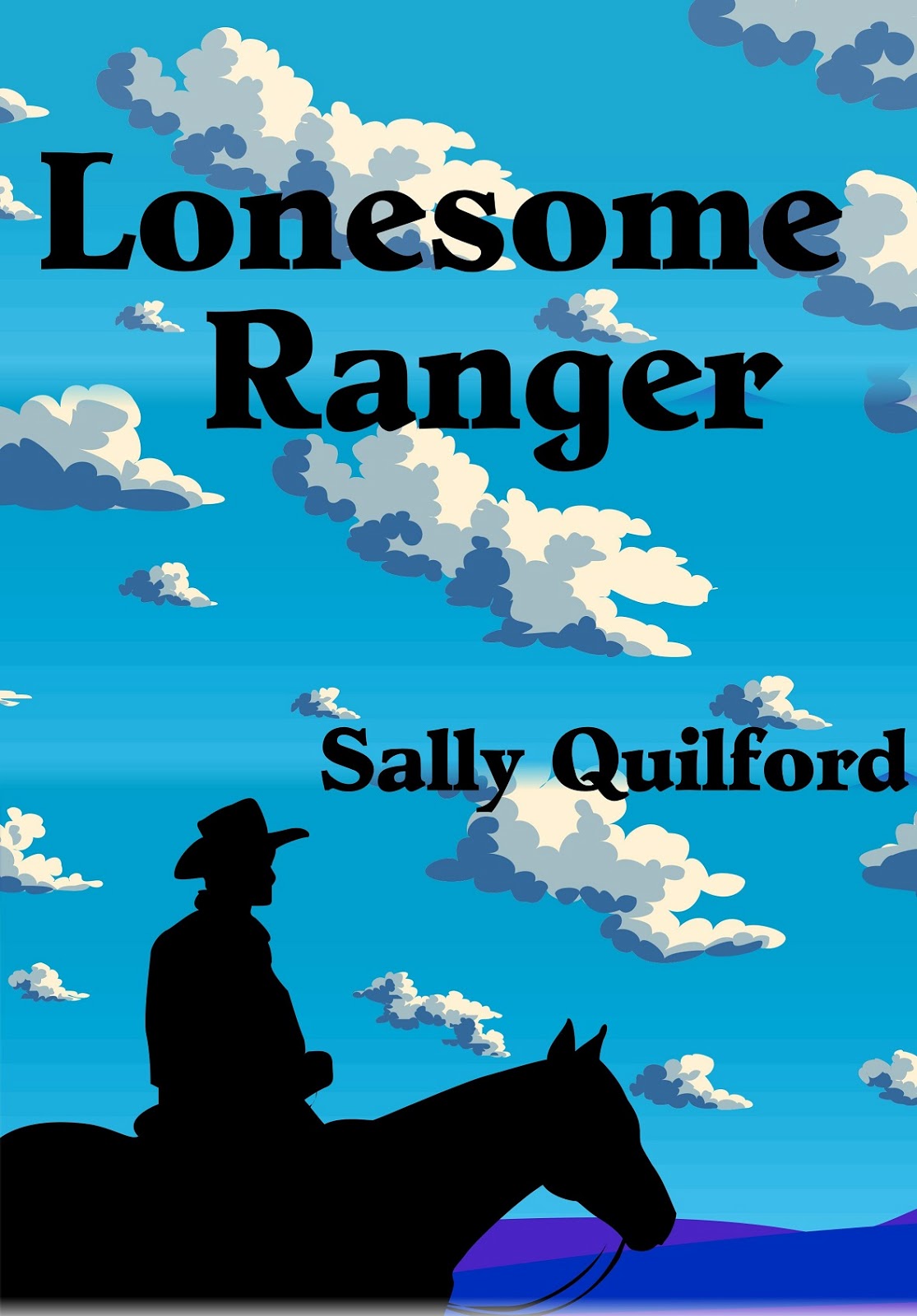 Englishwoman Connie arrives in California with nothing and no one in the world. She has the chance to take a job as a schoolteacher, but this chance is based on a lie. Handsome cowboy Nate Truman has his own secrets, but can he forgive hers?Buy

Find out more at Pulse Romance

Find out more about Sally and her books and courses on her blog.

(Because of the time difference, you might need to double check it is free on Amazon.com - if not, please try again later.)

Thank you so much for visiting us today, Sally.

Thank you for inviting me! It's a pleasure to be featured on this great blog.

Great interview with lots of good advice. Thank you, Sally.

It's lovely to have you here, Sally.

Thanks for going minxy for the day, Sally, and for the free read!

Thanks for being here today Sally. I like that 'Mind the Gap' advice!

This is a favourite blog of mine to visit Sally. It's great to see you over here.

I commented earlier but it's gone awol!
Great interview and some good tips. Thank you, Sally.

Thanks, Pat - our spam filter was being a bit too enthusiastic. Found your comment and have authorised. xx

Hi Sally and Suzanne. A great interview. We can always rely on you, Sally, for down to earth writing advice, so thanks for sharing this. I agree about taking days off (although maybe not too many.)
Time away from writing usually means an enthusiastic return - and that's when all the good stuff happens.
I'm off now for my free download of Bella's Vineyard.
Thank you, both. xx

Hi Rena - great to see you here and glad you enjoyed the interview.

Thank you to everyone who visited and commented today. I hope you enjoy Lonesome Ranger and Bella's Vineyard!

And thanks again to the Minxes for inviting me!

Thank you for being such a lovely guest, Sally.

Great interview, thanks for the tips. Continued success!