The Romance of Fiction

Sometimes the line between fiction and reality can become blurred and for me that's always something to celebrate. I don't know how many of you are familiar with 'The Children of Greene Knowe'? It was one of my favourite books as a child - the stories of the past very much alive in the present. "I like this house," said Tolly. "It's like living in a book that keeps coming true". The stories captured my imagination and when I found out the house Lucy Boston based the books on was nearby I couldn't wait to visit it. However there was one snag, visits had to be booked in advance. I decided just to see the gardens and the house from outside but when approaching the house was stopped by Diana, Lucy Boston's daughter in law. This was when things began to get strange...

Diana: "Ah, there you are, I've been waiting for you."
Me: "Sorry, I haven't booked to see the house."
Diana (looking puzzled): "But you're Lorraine, right?"
Me: "Er, yes."
Diana: "And you've been looking forward to seeing the house for ages and love patchwork?"
Me: "Well yes that is actually all true, but..."
Diana: "Well I've been hanging on for you, come along."

I was hardly going to complain as I was swept into the guided tour of the house, feeling an affinity with Lucy Boston while viewing her famous quilts and touching the hundreds of years old toys featured in the books as the toys of the ghost children.
During the tour she suddenly turned to me and said "Strange how I knew you were going to come, isn't it? But then the house does do very strange things..." 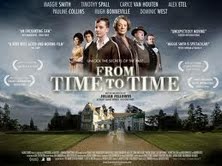 This was the sentiment often repeated in the books and also in the film based on "The Chimneys of Greene Knowe" starring Maggie Smith, titled "From Time to Time". The house (Hemingford Grey Manor) is one of the oldest occupied houses in England and used to be known as the poltergeist house. Locals refused to walk along the tow path beside it at night. I felt no uneasiness but did feel a strong connection - to Lucy Boston and to her stories as I touched the objects featured in the books.

I should add there was no rational explanation for Diana knowing I was coming (and no other Lorraine turned up after me!). The visit touched me and made me think about how great a part of my life fiction is. I'd thought being mostly restricted to audiobooks after my brain injury would be limiting but didn't envisage how listening to fiction for most of the day (and often night too if it's a painful one) as I carry out other tasks would make fiction more a part of my life than ever.

In each story I feel connected to the mind of the writer and he/she has connected to me, albeit in a small way. I've probably read many of the same stories you've read or even written. We're all connected by this complex, ever-expanding venn diagram of words and ideas. We visit the same fictional worlds like literary tourists and are connected by them. Maybe this is a fanciful, romantic notion but what more can you expect from a romance minx ;-) ?

Ooh, I got chills all over again reading your post Lorraine. What an amazing experience!

Oh, I got chills too!! That is very, very strange. And amazing. I remember those books - weren't they awesome??

What an incredible experience, Lorraine! Definitely one for the books!!