I'm pleased to welcome the very lovely Aimee Duffy to our blog today.


Writing has always been my first love, but even as a teenager who thought I knew it all, I wasn’t naïve enough to believe I could have an instant career out of it. My love of Ally McBeal took me down a different road and I now have two jobs I love (although working as a private client/conveyancing paralegal is way less fun than being a civil court lawyer!).

This is my second completed full length category. I started many others and ditched them half-way through. I also played around with a few novellas (none of which will ever see the light of day!).

Shoe shopping tends to win out over most things, but luckily my limited budget keeps me away from the shops—the weekend after payday is touch and go.

I tend to write more before I go to work, which means waking up ridiculously early, but after my first coffee the words seem to flow easier. At night I get far too distracted.

I have absolutely no idea what works yet! If anyone has any tips, let me know. My lovely publisher booked me on a blog tour this month and next, which I think is a good idea. It gets your name in front of people who wouldn’t have heard about you otherwise.

I have to write every day. If I don’t, I feel wrong. Even if what I’m putting down is gobbledygook, I’m addicted to making some progress. That said, some days it’s hard and the most I can do is go back to the beginning of the chapter and edit. I tell myself it’s better than nothing, which I suppose it is. I always try and put aside at least an hour for writing.

6. Which blog(s) do you read regularly?

The Minxes’ of course! I also follow a ton, but the ones I find extremely helpful are Jackie Ashenden’s, Maisey Yates’, Writer Beware and Incy Black’s. Also Suzanne Jones’ and her sock phobia gives me a good chuckle :)

7. Is there a book you haven't written yet that you're dying to? What genre?

For some inexplicable reason I really want to finish the Assassin’s Creed books. I read the first, and was hooked. Plus I’m a bit of a geek and like the games (I blame this on my teenage brother).

8. Keeping fit: Do you have an exercise regime to counterbalance all those hours sitting at a computer?

I’m not a fan of the gym. I prefer the outdoors, love hillwalking, but in Scotland you have about three weeks of decent weather to do it. The last time I was up The Law, it was a mud bath and I fell on my backside a few times. Now the winter has settled in, I think exercise is out the window for another year.

9. Could you be friends with any of your heroines?

I could be friends with them all! Annabelle from The Monster of Fame was really easy to connect with. She’s good right to the core.

10. Have you ever written a hero you'd be happy to run off with?

Most of them ;) But if I had to choose, I’d pick Jake from Isle of Sensuality. He’s cheeky, charming and hot. Plenty going there to keep me occupied for a while. 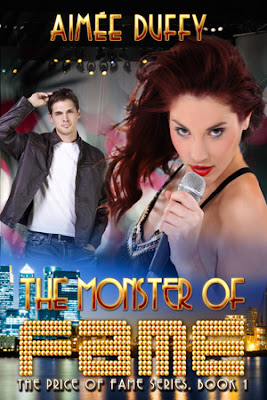 Can the voice of an angel heal a tortured soul?

Annabelle MacIntosh enters a reality singing contest to save her family from their mounting debt. Miles Oliver, celebrity judge and the owner of the biggest record company in the UK, doesn’t think she has what it takes. She sings like an angel, but when she performs all he can focus on is the terror in her eyes. It’s a look he knows only too well. After the pressure of fame destroyed his wife, Miles swore he’d never let the same thing happen to anyone else. Driven by the guilt he’s carried for years, Miles tries everything in his power to make sure Annabelle doesn’t succeed, because he doesn’t believe she’ll survive it.

Annabelle needs that prize money, and she’s determined to win it. As she fights to make it through each round of the contest, an attraction begins to develop between the two adversaries. The longer Annabelle remains in the competition, the deeper her attraction grows to the man who’s trying to prevent her from reaching her goal. Can she convince Miles she’s strong enough to fight the fame monster and win?

You can buy The Monster Of Fame from the following:

Thanks for visiting us today, Aimee. It's lovely to have you here.

It's great to be here! Thanks for having me. :o)

Aimee, I loved your entry for So You Think You Can Write 2012. I'll definitely be checking out your book on Kindle, and best of luck with SYTYCW!
http://helenafairfax.wordpress.com/

Wow, impressive that you write daily! I know I should, but there are days when it won't come. :(

Thank you Helena! Just checked out your blog and caught some fab books I must read!

Jennifer I just 'have' to. Who knows why. Even if its mince, I still do some ;o)

Welcome to the minxes, Aimee, thanks for going minxy for the day! Love the sound of your new release!

Congratulations on your new release, Aimee. I'm so excited for you! Squee! :)

Sally, it's a pleasure! Happy to go minxy at any time ;)

Thank you Tina! I'm squeeing too!

Wow, Aimee, thanks so much for the shout out for my blog! And big congrats on your book - I too thought your SYTYCW entry was fabulous. *goes off to buy Aimee's book* Hope it sells big time!