The minxes are delighted to have Liz Bailey here with us today, answering the minxy questions. She'll be telling us too about her new release, A Georgian Romance called Mademoiselle at Arms.

What is your writing process?
I tend to work to a general outline, with some data culled from research. I need character names, though not necessarily much info about the characters. I don’t plan too much because I find once I get going that new ideas are generated by what I write. I don’t really know what a scene will end up doing, so I just start the scene and see where the characters take me. I like to finish the first draft - unless it goes badly wrong! - and then work it over until I’m happy.

Everyone who writes knows it's not easy - what methods do you use to keep at it on days when it would be so much easier to go shoe shopping?
With experience I think it’s easier to knuckle down. I try to write a first draft on my Alphasmart (really simple little computer with four lines of text and no distractions) so that I can’t do anything else. Then there are the endless cups of tea. However, if it’s really not working, I leave it and do something else that day.

Keeping fit: Do you have an exercise regime to counterbalance all those hours sitting at a computer?
I don’t, but I walk into town several times a week, and I do a Lotte Berk class once a fortnight usually (though it should really be once a week) to keep my back in good shape. But I take breaks and move which helps a bit.

Do you believe in writer's block?
I believe in treacle! Most writer’s block, in my experience, is caused by going wrong somewhere in the story. You have to trace back and find it. You can also be stopped in your tracks by negative comments, especially about a work in progress. So I don’t let anyone read it until I’m happy with it. But treacle books are hell on earth. They just don’t flow and that can go on indefinitely. You just have to write through it.

Have you ever used an incident from real life in a book?
I’ve been using incidents from real life to create a spy thriller for a client, and I have used something from my past. If so, did it get you into trouble? Well, I’ve handed the spy book to another writer now, so if there’s trouble, it won’t be me!

In what way is being a published writer different to how you thought it would be?
The problems don’t stop. They multiply. You think once you’re published, everything will be roses, but it isn’t. There’s no guarantees in this business and you can be dropped as easily as you were picked up by a publisher. You still have to meet editor’s requirements, and you still have to wait for acceptance. The good thing is that you have track and agents and editors will take you seriously.

Promotion is no longer a dirty word. In what ways do you strive to reach more readers?
I’m learning this game. I do social networking - twitter, Facebook and Goodreads - and blog tours are good. I’m so astonished at how generous bloggers are in doing reviews and helping with promotion.

What is your top promo tip for other authors?
Don’t be afraid to ask! If you don’t ask, you won’t get. Just try it.

What did you learn while writing this book?
I originally wrote this book a long time ago, and I think I learned a great deal while editing it up to current standard. For one thing, I realised just how much craft I’ve learned in the intervening years. There’s so much to writing and you get better all the time, but it’s only when you go back to something you did years ago that find out just how much better you are now.

What was the most fun part of writing this book?
Having a heroine who is fearless and incredibly accomplished with weapons, as most young ladies of her era had little or no knowledge of firearms or swords.

And just for fun: what would your hero’s honeymoon destination of choice be?
I think Gerald would take his bride to a very English seaside resort where she’d probably start chasing smugglers! 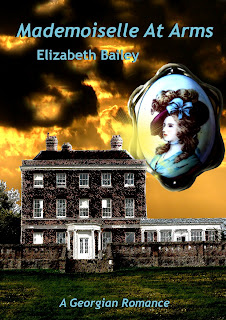 Mademoiselle at Arms
Threatened with a pistol by the young lady discovered in a deserted mansion, Major Gerald Alderley is instantly intrigued. Who is the beautiful intruder? And why does she disguise herself as a nun? What circumstance has thrust her into an enterprise both foolhardy and dangerous? The girl’s French accent places her with the émigrés from across the channel, except that Mademoiselle insists she is English.
Set on unravelling her secrets, Gerald begins a relentless pursuit, hunting down every possible clue - much to the indignation of Mademoiselle. When her life proves to be in danger from the villainous émigré Valade, Gerald has his work cut out. For Mademoiselle Melusine, engaged in a desperate battle to prove her true identity, believes she is well able to take care of herself and is determined not to be rescued.

Mademoiselle at Arms is available here for Amazon.uk, and here for Amazon. com
Thank you so much for being our guest today, Liz!
Posted by Sally Clements at 8/01/2012 09:26:00 AM

Oh I like the sound of this. Off to Amazon to get it at once.

I agree, it sounds refreshingly intriguing. Definitely my kind of heroine!

Thank you, Jenny and Lorraine. Hope it lives up to expectation!

This sounds like a fun book, Liz, and I love the idea of writer's block being like treacle. It's a much prettier image than the oil sludge I had in mind!

Thanks, Romy. Though oil sludge is sometimes what it feels like!