I am exceptionally pleased to introduce you all to Christina Courtenay, especially since I got the chance to meet her in person at the London chapter meeting of the RNA in early July (and since she celebrated the release of this book by sharing champagne and chocolates with us!).Her latest book, The Silent Touch of Shadows, is a recent release from publisher Choc-Lit.


What is your writing process?
Usually I start with a key scene, which for some reason or other has come into my mind and won’t go away until I’ve written it down. This gives me my main characters and their problem/conflict and can be anywhere in the story, so not necessarily an opening scene. That means I’ll have to work backwards/forwards from that point on to build the rest of the story, but I don’t mind. It’s a bit of a chaotic way of doing it, but it works for me!


Everyone who writes knows it's not easy - what methods do you use to keep at it on days when it would be so much easier to go shoe shopping?
I reread what I’ve written the day before and normally that will pull me into the story sufficiently to keep going. If I’m starting something new, I’ll read the research notes with (hopefully) the same result. And if I’m between stories, I’ll either reread some story ideas (which I keep in a special folder – always have to write them down while I remember!) or watch a movie, which often sparks ideas for me.


Keeping fit: Do you have an exercise regime to counterbalance all those hours sitting at a computer?
Er, no. I’m one of the world’s couch potatoes I’m afraid, totally allergic to the word exercise! I do walk my dogs every day, but as they (a) have very short legs and (b) two out of the three don’t like going for walks much, this doesn’t really give me much exercise. I keep promising myself I’ll do power walking or take up zumba/yoga/pilates but somehow it never happens ... (Just like I never seem to stop buying chocolate either  )


Do you believe in writer's block?
Yes, but whenever I experience it myself, I just go and work on a different story for a while and hope that will “unblock” the other one. I usually have more than one story on the go at any one time. It’s best not to think about it and just get on with something else, then the subconscious will usually fix whatever the problem was with the first story. If it doesn’t, I skip to a part of the story I know I can write and go back to the difficult bit later.


Have you ever used an incident from real life in a book? If so, did it get you into trouble?
My latest story The Silent Touch of Shadows features a ghost who is based on a real one and some of the incidents when the heroine sees him happened to the owners of the house the real ghost haunted. I didn’t get into trouble for using these though as I asked permission first.


In what way is being a published writer different to how you thought it would be?
It’s much more about marketing yourself than I thought and I seem to spend a lot of time doing everything EXCEPT actually writing the next book! Before you’re published, you have no real demands made on you and can just write or not as you like. You basically write for yourself. Whereas after you’re published, you have to think about things like your USP and genre (it’s my experience as a reader myself that if I read a book I like, I’ll want more of the same from that author) so you ask yourself “is my next book going to be similar enough to the first one to keep readers happy?” And “is book number two going to be good enough as follow-up?”


Promotion is no longer a dirty word. In what ways do you strive to reach more readers?
I’m on Twitter and Facebook, I have a website (and a blog which I’m afraid I’m not very good at keeping on top of) and I’m on four group blogs – the Choc Lit Authors’ Corner, The Heroine Addicts, Historical and Regency Romance UK and Historical Fiction Excerpts. I find it much easier to blog as part of a group and hopefully it’s more interesting for the readers too. Apart from blogging, I occasionally do talks and book signings – I’ll be speaking at the Historical Novel Society Conference 2012 in September for instance.


What is your top promo tip for other authors?
Just grab any chance that comes your way (like being a guest on lovely blogs like this one!)


What did you learn while writing this book?
Perseverance! This was one of those stories that just wouldn’t leave me alone and I never lost faith in it, even though it took me a long time to get it just right.


What was the most fun part of writing this book?
Writing two stories at the same time and trying to weave them together. I love reading time slips and writing one was just as great!

And just for fun: what would your hero’s honeymoon destination of choice be?
Well, as I have two heroes (one in the past, one in the present) I’ll have to give you two answers – Jake’s destination of choice would probably be a deserted island where he could be alone with Melissa (they have children/pets/great-aunt etc around them all the time, so he’d want to get away from that), whereas I think Roger would just have whisked his bride off to his own home, away from all her horrid relations! Neither man would care much about the surroundings, as long as they could be completely alone with the woman they love.

Many thanks for having me as your Spotlight guest! 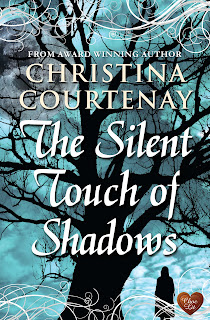 What will it take to put the past to rest?

Professional genealogist Melissa Grantham receives an invitation to visit her family’s ancestral home, Ashleigh Manor. From the moment she arrives, life-like dreams and visions haunt her. The spiritual connection to a medieval young woman and her forbidden lover have her questioning her sanity, but Melissa is determined to solve the mystery.

Jake Precy, owner of a nearby cottage, has disturbing dreams too, but it’s not until he meets Melissa that they begin to make sense. He hires her to research his family’s history, unaware their lives are already entwined. Is the mutual attraction real or the result of ghostly interference?

A haunting love story set partly in the present and partly in fifteenth century Kent.

A Silent Touch of Shadows is available in paperback from Amazon and Amazon UK, and on Kindle for both the US and UK.

I love the sound of this book, Pia! rushing off to get it!

Thank you Sally and Gina! And thank you again for having me as a guest!

I have just finished this book and really enjoyed it - especially as I believe in ghosts! The timeslip is effortless and the two love stories show how much the art of romance has changed over the centuries. Roger's story was so very sad - I won't say any more than that...

Many thanks, Guernsey Girl, really glad you enjoyed it!

Great interview, Christina, and the cover is so atmospheric.

Thank you Christina, I'm so pleased you like it! Atmospheric was exactly what we were aiming for, so that's brilliant :-)

Its good to be here, very nice post, the content is amazing, keep posting friend it will be very helpful for everyone, Thanks for sharing. I really liked it.
Thanks And Regards

I could relate to much of this, Christina. I'm not a meticulous plotter, and I do the 'distract yourself with something else thing' when I run out of steam. Lovely cover- isn't it exciting when you first get a glimpse of it! Good luck with the book.

Thanks Carol - glad it's not just me! And yes, I love getting new covers :)

Its good to be here, very nice post, the content is amazing, keep posting friend it will be very helpful for everyone, Thanks for sharing. I really liked it.
Thanks And Regards >ppi claim refunds