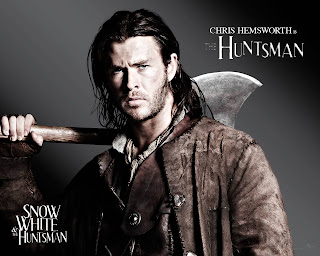 One of the best things about being a mum of daughters? The fact that I can legitimately go and see loads of movies that I really I'm too old to go and see by myself. The latest of these, is Snow White and the Huntsman, and here's my review!

The movie looked beautiful. The evil queen - Charlize Theron, was of course very beautiful on the outside, but not so beautiful inside. In fact, the story was very much as one would expect as far as the evil queen was concerned, although the script did give a reason for her evil nature - one that might have gone some way to make her less of an evil queen, and more of a mixed up one, if she wasn't so darned evil!

Kristen Stewart did her Snow White thing - and certainly looked the part, and found an inner core of steel at the movie's end - looking positively Joan of Arc like in the battle scenes.

All the stuff you'd expect are in there, dwarves, apples, handsome suitors - no surprises as the story trucked along to its conclusion.

But for me, the best part was definitely the huntsman. Chris Hemsworth played him well (although the accent?! I won't mention the accent), and was lucky enough to be given a character who was wounded emotionally and not quite as cardboard cut-outy as he might have been. As a romantic soul, I wanted more in the love department, but as my companion stated "Why do you like him?" I guess there was probably enough there for the pre-teen audience!

In conclusion nothing ground breaking in this movie but a pleasant enough way to while away an afternoon.

I haven't seen this movie yet, but it seems like a lot of people were just "ok" with it.

I wanted more romance too :) There was some talk about sequels, and I wonder if that's why it felt like they were holding back on the story. I agree with you. It wasn't ground breaking, but it was a pleasant way to spend an afternoon :)

I found the ending very strange. I mean, the film just stopped with Snow White hanging around looking awkward after her coronation. No cliffhanger or anything.

I also found the film's characters underdeveloped, specifically The Huntsman and The Prince, as so much time was spent on Ravenna.

It could have been so much better if there had been more focus on some of the other characters, and less on the 'look' of the film.

I also found the timeline strange. Were we looking at a story that happened over the course of 24 hours, 1 week, a month? Or what?

But I agree, the cinematography was awesome, as were the costumes.

I can't wait to see this one. But I have no children to go with, so perhaps I can borrow someone's. lol...

Sally, I so agree with you about the Huntsman - definitely the best part of this movie! And I too wanted more in the love department, although someone said to me that perhaps they're planning a sequel so that's why there wasn't all that much? The accent - yes, let's not mention that LOL, but it didn't matter at all really :)

Led by a perfectly cast Charlize Theron devouring the scenery as the evil queen, Snow White and the Huntsman is an entertaining spin on the classic tale, combining great-looking visuals and exciting action.