How much of you is in your characters?


I keep thinking about this question as I'm trying to get a good grip on the heroine in my current WIP.

In real life, and by that I mean, the life in which I have a double Masters in Engineering, have a day job I'm good at, and have always passed classes with better than average grades, I'm a confident, self-assured person, in contrast to the insecure, whiny mess that I'm as a writer. :-) and as a mother....
Growing up in a conservative culture in India( even though my dad was the most open minded, awesomesauce dad among our friends and families), I've been called arrogant, outspoken, and many more things by some small minded family members. I was the first in both my dad's and mom's family to come to USA alone (in contrast to being married and arriving as someone's wife or just migrating with your whole family), and I had done it at 20 and with a full scholarship to a university.

The point of this self-indulgent, biographical rambling is that I have opinions, and I realized at a very young age that usually these opinions, more often than not, were on the opposing side of the general consensus that family and sometimes, my friends came to. But I've never cared, though I taught myself that it was ok to have a different opinion.

And this is mostly reflected in the heroines I write. They might not have it all together like I do (cue hysterical laughing here :-)), but they are confident women who won't take crap from anyone. Even if they might not do it in a stick-my-face-in-yours kind of way. The heroine in my last wip, Olivia, who will remain my favorite for a long time to come, did just that. 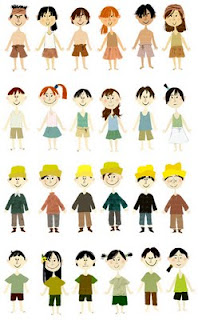 Not so with my latest heroine, Lexi.

I wouldn't call her a pushover as my hero has just done, but she's close to being one. Especially when it comes to her two friends who are all she has in the world.

I think (think being the operative word here) it works as to why she's like that, what has prevented her to stop taking crap from these said friends, and the growth she has to undergo after she realizes what she has become is of course, aided by our hero. But I'm having the hardest time writing her.

I keep wanting to make her more ballsy, and have flashes of her being just that, here and there, which makes for a very inconsistent character.

So I started to wonder: How can I be a good writer if I couldn't write more than one type of heroine? Will every heroine I write be a sum total of the same character traits in new packaging? Not everyone in the world is confrontational, or gutsy. And, personally, gutsy heroines who are nothing but gutsy drive me up the wall.

Sri, this is a subject dear to my heart. I enjoy reading heroines who are gutsy and others who are total wimps but prove to be the braver by the story's ending.

Sometimes, when someone criticizes inconsistencies in a character's actions, I wonder if they expect the character to be the same throughout the book? Where would the growth be? Aren't we by nature a little different with each person we're around due to our environment or upbringing or expectations?

On the outside, I'm one person at work, while another at home. True that basically I'm the same and I react somewhat the same in the inside, but what I let others see can be different. Does that make sense?

To me, it's the way the inconsistencies are betrayed in a book that truly layers the character.

So you can have a gutsy heroine in every book you write, but by layering other factors, it will come across as different. For example, a heroine who can kick butt while doing her "job", but when she's at home, she allows her mother to browbeat her. Or she's OCD with how her clothes are arranged. Or she's afraid to fly in a plane.

Thank you so much for visiting the minxes blog...

And OMG I totally squeeed in the dark here as I read through your comment...

I love it where you say- is a character expected to be the same throughout the book and with different people..This is exactly what I've been wondering today...

The heroine Lexi has always gone above and beyond for her 2 friends so far that they have started taking her for granted..whereas when it comes to the hero who has manipulated her into a situation she doesn't like- she becomes ballsy as she doesn't trust him..so i wondered if she wud come across as inconsistent...however much I tried she just had so much more spunk when it came to him...

Your comment cleared my doubts so well that I'm going to copy it and paste into a doc and ponder it a little more...

Thanks once again, and congrats on your new grandson,Owen..Yes, I immediately did snooping to find out more about you....:-)

Hi, Sri! Great post-and I agree with you. Inconsistancy in behaviour is also something that occurs in real life. We all where different hats I think to a certain extent depending on where we are and who we're with. I guess as long as the reader gets why the character is behaving differently that is the important thing. Ha, and I love strong heroines. Love them. And I can't wait to read yours :-)

Great discussion! Interesting on both personal and writerly levels. :-)
One thing I've discovered about writing romance (particularly Modern/Presents which has such high octane romance and in-your-face alpha hero behavior) is that all of my characters end up being consistent about one thing: fear of LOVE. :-) Love is what will ultimately make them whole and strong, but they can discover that hard lesson in different ways and sometimes they thrash around quite a bit and aren't particularly consistent about the way they get there.

I've written confident, brash and brazen characters who are unafraid of taking on any and all comers, but there is that part that's kept hidden that is raw and vulnerable and afraid to love. A part that's not at all consistent with the face they show the world. And that's the part that the romance--the love between the two characters--ultimately reveals. (Um, if I've written the story successfully, lol) On the other side of that coin is the character who has been wounded and is shy or wary or reticent. But when she/he comes up against the H/H--that certain someone who pushes buttons s/he doesn't even know exist--questions arise and so does self-discovery. Love trips triggers and uncovers layers! The important thing I need to remind myself is to show the process, to clue the reader in on the conflicts that are happening and WHY they're happening. I think this is super hard but as a reader I know it's so rewarding.

Thanks for the thought-provoking post and good luck with Lexi! I'm a big fan of vulnerable characters, but like you I'm constantly trying to balance...

Really good post, Sri. I think that these sort of issues with heroines in particular, mean that the writer has really plumbed the depths of what character is. All of the commenters have some really good points too, it's all about characters with layers. Sometimes in life, people act out of character, it's really difficult to write that happening, but I think it can be powerful if done right, the trick must be to have readers identifying with the character so much, that they know or guess why the character is behaving that way. Deep writing. Good writing. (Incredibly difficult writing!)

I'll look forward to hearing more about Lexi and how she's doing in your book.

Thanks for visiting the minxes!! Yep, I am also seeing that inconsistencies in the way they behave might also propel the the conflict within the characters too...

I love that part where it is that one person who triggers something within the other, trips their defense mechanism so to say...:-)

And of course, as a huge fan of Presents, for writing and reading..
Can't wait to read your heroines too...

Sri, great post! Isn't funny how a family reacts when one of their own has a different opinion than the rest? It can definitely lead to some interesting conflicts.

And I think people wear a multitude of hats from work, to parenting, to responding to a parent. I think as long as the reader is privy to the heroine's thoughts/feelings/reactions, she'll understand why she acts different in various situations.

And I can't wait to read about your heroine. I have my fingers firmly crossed that it will be real soon.

Good point, Sally!! Even if the inconsistency is something reader understand, I think it works, yes...:-)

Great post, Sri! I also love a strong and feisty heroine and so I can't wait to read about Olivia.

On the flip side, it is always interesting to write characters who lack some of the main qualities we see in ourselves. The funny thing, though, is that even for some characters who are not outwardly like me at all, I always manage to find a glimpse of myself in them.

Good luck with your WIP:-)