Man of the Month poll - The Rugby League heroes

Last month it was my pleasure to research the rugby union players who were then scrapping it out for the Rugby World Cup. This month it's the turn of the rugby league players who are currently playing for the Four Nations Cup. For those who are confused--rugby union has 15 players a side, league only 13. There are lots of line outs and general dropping of the ball in union that I don't really understand. In league, the boys are men who hold the ball in their hands and run at their opponents ;-}

First up are the current holders of the Four Nations, New Zealand. This rather pensive looking guy is Jared Waerea-Hargreaves. Google him-amazing family background!

Next is Adam Blair. 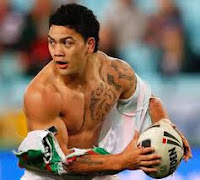 And finally, a line up of Kiwi rugby league players wouldn't be complete, in my opinion, without the fabulous Isaac Luke {right}. I had a conversation on Twitter last week with some ladies who also appreciate his marvellous Haka skills! Such a shame his top got ripped from his body, huh? 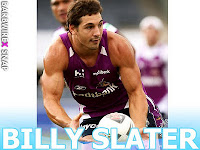 The Australians are also strong in this contest and this year is no exception. First up is Billy Slater. 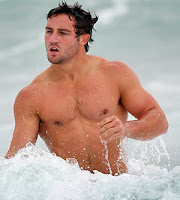 So sorry the only really great picture of Cooper Cronk I could find was him frolicking in the sea ;-} 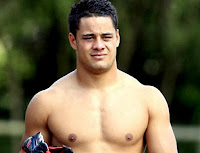 I will now admit to cheating. And totally using my blog writing power for purely selfish. I have no idea at all as to why Jarryd Hayne is not in the Australian squad but thought I would lead a protest to the Australian selectors by including him in my blog poll. It's wrong. He should be playing. And preferably in one of those ripped tops ;-}

Wales are also included this year {previously the Four Nations was a 3 Nations}. Apologies to the Welsh readers there may be but your squad needs some prettifying up for next year. Of course I totally understand that the players get picked for their rugby skills and not for how they look in their tops {or without them} but still ... Lloyd White is the pick of the squad. 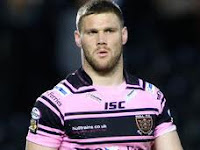 It's not the first time the best looking English players come from my home town :-} And I definitely can't be biased because Jon Wilkin hasn't played for a Hull club for years!!

In case anyone would like to see any of these guys in action, you can see Wales v New Zealand at 12.30{including the amazing Haka skills of Isaac Luke!!} tomorrow on Sky Sports 1 and England v Australia on BBC1 at 3 pm.

Finally the winner of last month's poll, very fittingly given the Kiwis won the World Cup, was Sonny Bill Williams who played professional rugby league before switching codes :-}
Posted by Catherine Coles at 11/04/2011 11:35:00 AM

Email ThisBlogThis!Share to TwitterShare to FacebookShare to Pinterest
Labels: Inspiration, Man of the Month poll

I confess I don't know much about rugby, but I'm interested now! lol. Thanks for starting my weekend off on the right note. :)

Thanks for your dedicated research, Catherine, as well as for teaching most of something new. Have you ever considered writing a rugby-themed romance?

I'm liking the focus and intensity on Jared's face :)

There's plenty of rugby about for the next couple of weeks, Sutton Fox!

I had a rugby playing hero in last year's New Voices comp, Romy, the background of Jaryd Hayne, the names of some of my fave players and the personality of someone {mostly} fictional!!

Yes, I really loved that pic of him Aimee, even if you can't see his rather wonderful physique!!