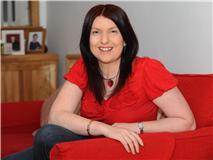 Since a few of us Minxes met Scarlet at the RNA conference in 2010, before she became rich and famous as a published Harlequin writer, we Minxes have been her biggest fans. Which is why we are so excited to have her here back with us again today, this time to talk about her December release, The Boy Who Made Them Love Again.

Once again, thanks for appearing in our spotlight again, Scarlet.


What is your writing process?
I write a thousand words everyday no matter what. They might not be good words, but at least it’s something. My kids have activities nearly every night so I always plan at night when I’m out with them. It means when I sit down to type I know exactly what I’m writing that day. Research is an entirely different matter….


Everyone who writes knows it's not easy - what methods do you use to keep at it on days when it would be so much easier to go shoe shopping?
I try not to allow myself to be distracted. If I’m writing a bit I don’t like I try and figure out why. Sometimes skipping on to a new scene helps, but usually I write my story in the right time sequence.


Keeping fit: Do you have an exercise regime to counterbalance all those hours sitting at a computer?
I am rubbish at keeping fit. I bought a bike recently does that count? I also tried the “shoogely joogely” also known as the power plates, but I never lost a single pound. I did however, read many books on my iphone.


Do you believe in writer's block?
I believe in trying to write my way through it. It’s the only thing I can do. Shopping can also help!


Have you ever used an incident from real life in a book? If so, did it get you into trouble?
I’ve never really used an incident as I have an active imagination. I have used settings though, or based a story in a similar setting. I’m writing a cruise ship story next year and that will be based on my holiday where I prowled around the medical centre on the MSc Magnifica last year!


In what way is being a published writer different to how you thought it would be?
I still have a lot to learn. The learning curve is definitely steep. There’s also a little bit of regret about the things you have no control over ie your book covers etc.


Promotion is no longer a dirty word. In what ways do you strive to reach more readers?
I’ve recently joined Twitter after saying I’d never do it. I also have an author facebook page and I have my own website. I also blog on the Harlequin website once every two months. That’s as good as it gets for me and I still work fulltime.


What is your top promo tip for other authors?
Write every day and read all the current books in your genre. I also would advise to try and find out who the new authors are, and what their story lines are about. It gives you an idea of what they’re buying and what publishers are looking for.


What did you learn while writing this book?
This book deals with lost love, childhood illness and fertility. My favourite part to write was actually the most hideous. It’s when Abby is travelling to hospital with her sick son and she’s having terrible thoughts – if her son doesn’t survive she doesn’t want to be there. Every parent's nightmare. But people tend not to talk about it.


What was the most fun part of writing this book?
That my imagination can run riot! This book features the President and First Lady having the first white house baby in over 50 years!


And just for fun: what would your hero’s honeymoon destination of choice be?
This story is set in Pelican Cove, which is just like Cabot Cove in Murder She Wrote, but based on the Californian Coast. I think I would have to send my hero to the original setting! 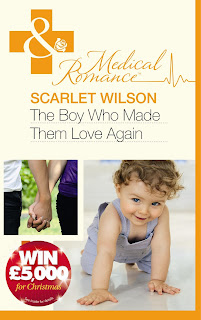 From Dr Storm to Devoted Dad

When Luke Storm ended his relationship with Abby Tyler, he thought that he was doing the right thing. Abby so wanted children and Luke knew he could never give them to her.

Now, five years later, when he meets Abby again, and with a little boy of her own, Luke is rocked. She's as gorgeous and adorable as ever, but if he wants Abby back in his life again he realises he has to let her special little son into his heart and become the father he never expected to be...

This book is already available at Amazon, Amazon UK and direct from Mills & Boon. Don't forget to also check out Scarlet's debut novel, It Started With a Pregnancy.

You amaze me that you work full-time, have such busy boys and still manage to write so much. I'm on my knees!

I'm so impressed that you produce so many words. I like your daily word target and do try to do the same but miss it far too often! Great insight into what happens once you're published, thank you!

Thanks Rach. I have to admit to liking writing. If you swapped the word writing to 'housework' or 'ironing' I would find a dozen reasons why I was too busy to do it!

Hi Charlotte, 1000 words isn't too difficult at all, it only takes around half an hour and sometimes I do it my lunch break at work. Knowing before hand what I'm going to write is a huge time saver. I sometimes procrastinate over that for hours at swimming practice, football or tae kwon do!

Go Scarlet! You are an inspiration - talk about great time management! Caroline x

I agree with the others, Scarlet, you are a total inspiration. I really need to get myself into gear and take some time management skills from you.

All that and a really truly lovely person. It was fab to meet you at RNA last year and I really hope we can meet again next year :-}

Hi Caroline
Nice to see you here! You know I'm going to nag you about your Roman now - don't you???

Hi Catherine!
Hoping next years conference will be a Minxy meet up! Looking forward to it xx

It was lovely reading your answers to the Minxes questions!

Congrats on the release of From Dr. Storm to Devoted Dad!