I met Zee when I was still a complete newbie writer, and her support and encouragement really helped get me on teh right track, so I am pleased and proud to have her here in our Spotlight today. Zee lives in the exotic island paradise of Mauritius and is published under several names.


1. Where were you in your writing career 5 years ago?
I had just sold my first novel (The Other Side, written under the name of Aasiyah Qamar) to a big publisher over here in Mauritius. At the time, I had pretty much completed my second book, and was working on ideas for more books down the line.

I had to admit I was a total newbie back then and when I started penning stories some 6 years ago. Apart from English and literature classes I took in secondary school, I’ve never been formally ‘trained’ into writing. I had a knack for languages, all right – had a good way with words and yes, was totally wordy too. I just knew I wanted to write, and had no clue how exactly to make a career out of it. I thought you wrote, offered the book up to an editor, and if it got accepted, great. The book was pubbed, and you went on with writing the next book, and so on.

While publishing with a big print house (as was the case for my first sale) is very close to this scenario, when I started looking into e-publishing houses over in the US, I found out that being an author wasn’t just about writing books, but a totally different kettle of fish on top. I learned everything from scratch, from self-editing to self-proofing to finding critique partners and establishing my name and Web presence. I’m still learning to this day.


2. Where did you get the idea from for this particular book?
I’ve always loved a good story featuring amnesia. The buried past, the secrets just under the surface, the smokescreen of deception that hovers because the memory is blank. I wanted to write a story with an amnesiac heroine, to bring my own version of secrets and buried past to the light. I started this plot about 3-4 years ago, but back then the story was going nowhere because I wasn’t satisfied with the boring skeletons the heroine, Amelia, could bring out of her closet. I let the story stand on my hard drive, and delved into other mss.

Then, a combination of factors happened to steer me in the direction to pen Walking The Edge. It was the thick of winter here, and my son was on school break. I came down with a bad cold and tried a new medication, which threw me off my trolley while I was under its influence. I’d wake up, and not know if I was fully awake or dreaming, a sort of strange déjà vu feeling. During those moments of near-lucidity, I could hear the mind-numbing music of my son’s SpongeBob game which he bandied around on his GameBoy. This was a really weird moment in my life, and it got me thinking – what if Amelia felt like this too? She’d need to be under the influence of drugs for this to happen, and thus her cold, manipulating husband, Peter, came on board as the bad guy. What was his game?

And then I watched the movie Wanted starring Angelina Jolie, and things just clicked. I had the secrets that were lurking inside Amelia’s closet, the secrets Peter wanted no one to discover. Why? Well, *wink*, that’s in the book.


3. Where do you hope to be in 5 years time?
Still writing and putting a few books out per year, having an established reader base, making a difference in my readers’ lives, the way a good book makes my day/week better.


4. Which was the last book you read that you wish you'd written?
What I Did For A Duke by Julie Anne Long. I love historical romances, and I’m always in awe of how good historical authors bring worlds of times past into scope for the reader. This one caught me under a spell – it’s one of those books that read effortlessly. There’s this ‘flawed’ hero, this duke in fact, who’s out for revenge, but things don’t turn out the way he planned, because the heroine is no simpering miss. Lots of twists, turns, surprises, and these totally amazing, vivid characters that leapt off the page. That story captivated me, and I was going, “Darn, she’s good!”, about Ms. Long’s easy manner of drawing the reader into the story.


5. Was there any particular author or book that made you want to be a writer?
Vikram Seth and his novel A Suitable Boy. It’s a huge tome, but the read is riveting. It was like being in India during the times he talks about, feeling what the characters are feeling, smelling the food, discovering a new world of customs and traditions, a whole ‘other’ way of life. My ancestors hail from India, and I grew up in this Indian culture that’s somehow adapted to our adopted homeland, Mauritius, but which still bears striking resemblances to the ways of India.

I was inspired by Mr. Seth’s writing because I wanted to make people discover Mauritius and my world the way he brought the late 1940s India to life.

That’s how I started my career writing penning culture-based romances set in Mauritius. And then I discovered British authors Jill Mansell and Sophie Kinsella. Riotous romps set in England, a land close to my heart, that didn’t feature culture or traditions but which were so entertaining and fun. I wanted to write that kind of story too, and this is how I started penning non-cultural romance too.


Today they’re neither giggle-worthy (like, say, my first attempts that were littered with purple prose), nor are they cringe-worthy (like the ‘smut’ I was once encouraged to write). I’ve found my right balance with love scenes, which I love to write, because it’s a new dimension to bring to the dynamics between a man and a woman. Some stories beg to be written with the bedroom door closed, others let you peek in, and others take place ‘in the open’, so to speak. I usually let my characters dictate the path to their very own love scenes.

7. What's the most romantic moment of your life so far?
When my husband told me right away to go for my dream of writing. He didn’t ask questions, didn’t ridicule any mention of ‘romance’ – just gave me his unending support at a time my life was spinning off its axis. Many men in his shoes could’ve dropped me like a hot potato, because I got sick and having a wife who’s not in perfect health condition is not exactly glamorous. He stuck by me through thick and thin, and that’s the most heroic thing a man can do, in my book.


8. What do you wish you'd known about being an author before you were pubbed?
That it doesn’t end with selling a book! In fact, it all starts when you sell a book. I wish I’d known about things like promo, and establishing presence and name. Being an author is not being an island out there in the world. You have to be a total continent with bridges to every other land imaginable in your realm. Today I’m much more comfortable with myself as an author because I know I am doing everything I can to not be this remote, unreachable island.


9. What's the best writing advice you've ever been given?
To write your story, your way. I can’t remember exactly who said this to me. A lot of people have tried to advise me and through this advice, shape me into something I wasn’t. Of course, writing your story your way doesn’t mean you don’t care about facts and rules of grammar and story construction, etc. It simply means to be true to yourself, all the way. Ultimately, you have to be able to look into the mirror and be able to bear the image that beams back at you. You shouldn’t be ashamed of your reflection, and what better way to ensure such a thing never happens than being true to yourself?


10. Tell us about your latest release.
Walking The Edge is a novel that bridges over quite a few genres, and stands as Book 1 of the Corpus Brides series. At the heart of it, the story is the journey of an amnesiac woman who is out to find out what her erased past hides. It’s a mystery she must unravel, and along the way, help happens in the form of a French police commissioner. At first, he wants her as far away from him as possible, but events unfold that draw him to her like moth to a flame. Romance blooms between them as they go about the city of Marseille trying to figure out who she is, but what will happen when she does find out who she truly is?

This is the blurb for the story: 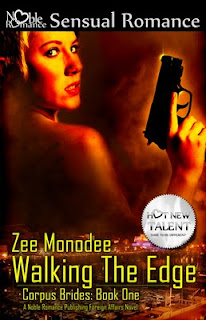 A woman without a past
Left amnesiac after an accident, Amelia Jamison struggles as her instincts slowly rise from the depths of oblivion, leading her to question her life as the wife of a cold, manipulating and distant man. Wisps of a dream show her another man she may have known intimately, but is he a memory, or a figment of her imagination?

A man with too much information
After many aliases, today Gerard Besson is simply a police commissaire in Marseille. When a mysterious woman starts to follow him, he is suspicious - and intrigued. But things aren't what they seem, and as he reluctantly gets closer to her, dregs of his painful, buried past emerge and make him question her identity.

Each seems to have led several different lives
But neither is prepared for what awaits them when they cross the fine line between knowing your true self and that of your alter ego.

Danger is the name of the game, and as it catches up with them in the French Provence, both know they better be ready for the inevitable fall.

The book can be found at the Noble Romance Publishing website - buy links coming soon.

11. What’s next for you?
Penning more stories! I have Book 2 of the Corpus Brides under way, titled Before The Morning, and it will be the prequel to Walking The Edge. Book 3, the final one for this series, is still in the outlining stages.
Posted by Romy Sommer at 6/29/2011 08:00:00 AM

Hi Zee, thanks so much for being here. I think we may have "met" on another forum as newbies too! I'm so glad you're still pursuing your dream and especially glad you're a minx for a day! Love the cover of your book!

Thank you Maya! Your name sounds familiar - I wouldn't be surprised we've met along the way! I have met so many amazing people over the years. :)

It feels great to be a minx for a day - thanks for the lovely welcome. XOXO

I also want to say thanks to Romy for inviting me over, and for the lovely intro she wrote to this spotlight. :)

Hi, Zee!
Great interview! It's always fascinating to learn about the diverse places people come from, and what sets us apart...and makes us the same. Can't wait to see you at jswayne.wordpress.com on the 5th! :D

Hi JS
Thanks for dropping by! Oh yes - we all come from different places, but at the heart of us, we're all pretty much the same too.

Looking forward to being on your blog on the 5th. :) Thanks again for coming over. xoxo

And I just wanted to share the book's Buy Link with you! It's just gone live. :)

Zee, it's great to meet you. Your book sounds interesting. Congratulations!

Romy, thanks for sharing.