Even if it's not your cup of tea, chances are you've heard of a certain high profile event taking place today (the extra Bank Holiday in the UK is a bit of a giveaway). Whether you're an avid royal follower or just vaguely interested to see Kate Middleton's dress it's unlikely the wedding will totally pass you by.
Now I'm not particularly interested in the royals, nor did I dress up as a princess as a little girl (I was more interested in toy cars!) yet I'll admit the vague thought "I wonder if William is too young for me?" has er, at times crossed my mind. The lure of crossing the line from daydream to becoming an actual princess, however unpalatable the reality might be, is an enduring one. It's why royal romances or 'grown-up Princess Diaries' sell as well as they do.
So, now William is off the market and Harry is too young for most of us are there any single princes out there in need of a princess?
Well actu 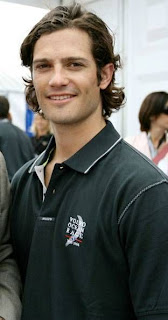 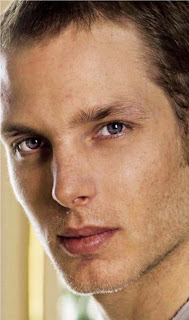 currently single after the end of a long term relationship (according to wiki!). Placed 9th on the Forbes List of 'Hottest Young Royals' he is very sporty. If the very
idea of an arduous cross country skiing race brings you out in a sweat he might not be the prince for you.
Andrea Casiraghi (right) is grandson of the Prince of Monaco and heir to an Italian oil fortune. Charity work in Africa and an interest in international development give him a more serious edge but he's frequently papped as another 'hot young royal' when out and about.
Hmm, Andrea has left me itching with a new story idea but out of pure 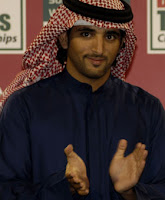 dedication to the cause I'll continue with our next prince - the Crown Prince of Dubai, Sheikh Hamdan bin Mohammed bin Rashid al Maktoum, who coincidentally is a guest at today's royal wedding. The Sheikh was appointed as crown prince of Dubai in February 2008, according to his father's decree. He's another sporty

prince - known as a competitive equestrian. Now I'm thinking Riders, Polo, Jilly Cooper... Okay back from my tangent. Next up we have Prince Albert von Thurn und Taxis (right), he's been listed many times as the World's youngest billionaire (he was aged 8 when he first appeared on the list). And no, he has nothing to do with taxis but does happen to be an enthusiastic racing driver! 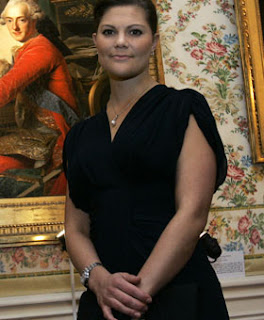 Or if you're thinking of writing a royal romance how about a modern Riva twist - Princess Victoria of Sweden is currently the only female heir-apparent in the world (though there are several females who are heiresses-apparent of an heir-apparent) after brother Prince Carl (above) was pushed into second place by a change in the law allowing the firstborn to inherit the crown regardless of gender. She finally married her personal trainer last year after a long courtship. Without royal blessing she would have lost the throne but in the manner of all happy endings approval was granted. Now that's a tale to stir the romance writer in me, but first I need to check out Kate's dress...
Click here for a list of Dreamy Kings and Hunky Princes (fictional). And confess, leave a comment and tell us all - we want to know who your dream princes are, fictional or otherwise. (Also if someone else feels like confessing to daydreaming about marrying William it will spare my blushes ;-)
Our honorary princess today is Ellie Swoop who is the winner of Christina Courtenay's book. Please contact us with your address Ellie and we'll pass your details on.
Posted by Lorraine at 4/29/2011 09:00:00 AM

Hi Minxes! Just wanted to let you know that I have reached my target for the Minxes April Word Count challenge, thereby finishing the first draft of the novel which I started for NaNoWriMo.This month I wrote over 21,000 words, which is considerably more than I would have done if I hadn't been in the challenge. Thank you Minxes.

I thought Kate's dress was beautiful. And the couple looked very happy! Congrats to them both.

Prince Carl Phillip of Sweden looks like a perfect Riva hero with his confident, fun-loving grin.

Andrea Casiraghi is clearly a Modern hero with that (in the immortal words of Dee Tenorio two days ago) "I'm gonna kiss you and you're going to be happy about it!" look in his eyes.

All are definitely inspiring!

Glad you like my picks Aimee :-) Prince Carl is my favourite, I agree, a perfect Riva hero!

Kate's dress was gorgeous wasn't it? Found myself glued to the whole thing and more than a little emotional...

I wasn't planning to watch the wedding and ended up watching loads. I have to say, the Swedish prince looks rather lovely - I might have to put him in a story!

*so* glad I'm not the only one who does the royal daydreaming thing!! Although, I must admit, I dream more about Harry than Wills. He's got such a devilish glint in his eye. I loved the way he looked behind him to report back to Wills how Kate looked :-)

I think my fave part was when they came out onto the balcony and Kate saw all the people below her. She looked astounded and very humbled. I'll admit, definitely shed a fair few emotional tears.

LOL Don't you just love Harry's devilish glint, Jo? I can't wait to see what he gets up to, now that he's the UKs most eligible bachelor. I don't know about you but I wouldn't mind having another royal wedding soon...