One of my favourite heroines of all time is Becky Sharpe in Vanity Fair. She is selfish, ambitious and willing to do anything to get what she wants. No, she's not particularly likeable, but she's sassy and strong, and by the end of the book I really want her to get her Happy Ever After.

Why? Firstly, because I understood where she was coming from (see my previous post on Motivation). Secondly, because she changed and grew.

In my opinion, the character arc in any novel, and especially in a romance novel, is far more important than the plot arc. The reader will forgive you not resolving a plot point (though it's perhaps not a great idea to leave the reader feeling unsatisfied!) but they're less likely to forgive characters that do not change and grow.

Which brings me back to The Vampire Diaries.

The best example of a well-written character arc, as Lacey Minx pointed out on her blog, is the character of Damon in TV version. In the book there is hardly any change in Damon between his arrival on the scene and the end of Book 2 (which is as far as I got before giving up).

In the TV series, as in the books, Damon starts out as evil incarnate. He only acts in his own interest. Then in the series, we slowly glimpse his feelings for the heroine. We learn what motivates him, and gain understanding of why he is as heartless and ruthless as he is. He starts to do things for the heroine rather than himself, and finally he develops a heart and acts to help the community, even though he stands to gain nothing from it.

Though his character is unlikeable, when he faces death at the end of the series the viewer is on the edge of the seat praying he will survive. Because the writers have made us care. As with Becky Sharpe, we understand him, and we know he has the potential for change.

In the books, the heroine Elena is a self-absorbed, manipulative creature who wants to be the centre of attention. She has a little back story (her parents died a few years earlier) but it's almost a non-issue. I never really got a sense of why she wants to be 'queen bee'. But my biggest issue with her is that over the course of the first two books she does not change. At the end of Book 2, Elena is still as self-serving and self-absorbed as she is at the very beginning. 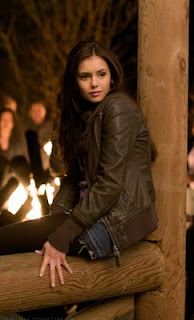 The screenwriters re-wrote Elena's character as less selfish and manipulative (even heading into Goody Two Shoes territory!), but in addition they have given her the two things I've been yammering on about: motivation (almost before the opening credits the viewer discovers that her parents died recently and she's struggling to get her life back on track) and they give her character a growth arc, as she moves from being a sad, introspective and reactive character to a happier, more in control, proactive individual.

So today's exercise: look at your own WIP to see whether the characters change and grow. Are the flaws that they start with addressed by the end of the novel? If your character has any unsympathtic qualities in the beginning, how does this change as the novel progresses?
Posted by Romy Sommer at 2/21/2011 08:30:00 AM

This is such a good post, Romy. I'm writing the end of my wip, and my hero has really changed, and is still really struggling with this new way of doing things. It's made me realise that I need to go back and make sure that I've shown him in all his different stages, as he grows to the man he is at the book's end.

I agree with Sally, this is a brilliant post, Romy! It doesn't hurt to have things hammered home in a new light (for me) so thanks :)

As a reader, watching the characters own up to their flaws and finally deal with them is as important to me as the H/H's relationship. And I love a story where the HEA would never have been achieved without that growth . . . it makes it all so much sweeter!

Interesting post, Romy. I read the first book, but found little to take me forward to continue with the series (despite the raves) - now I think I'll give the TV show a chance

Really useful post. You think you know these things and then as you get writing, it kind of slips between the cracks of plotting. Thanks for the reminder.