Two weeks ago I raved about the great job done by the screen writers of The Vampire Diaries. (Perhaps this is a good moment to say that all the opinions expressed here are my own and do not reflect in any way upon the other Minxes). 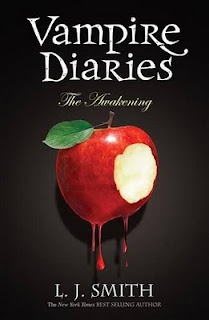 Today I'd like to share with you my deep disappointment in the books. I mean no disrespect to Lisa Jane Smith, author of the original books, who obviously writes well enough to be multi-published and to have a massive following (which is certainly more than I've achieved!) but I had the misfortune of reading the first two books after watching the TV series, and there is simply no comparison.

Having spent two years at film school, and worked for a while in film and television, I know better than most that film is a collaborative process and it's easy to bring added value when you have a whole team of experts working together on something. But the vast difference in depth and scope between the books and the TV series highlighted an issue that is very personal to me.

The TV show is stellar. The books are good. There's a difference. Ignoring the thousand and one things the film-makers changed, including setting, whole characters added or removed, an entire new back story created, there are two major differences between the book and TV versions.

1. Depth. As I said in my last blog post, there is a sense in the TV series that each and every character is a well-rounded and very real individual, with an entire background and motivation whether it's revealed or not.
Sadly, the book does not achieve this. Most of the minor characters, even the heroine's closest friends come across as one-dimensional. This is unusual in a book adapation as books are usually able to dig so much deeper in films. Just think of all those Jane Austen adaptations that have to leave out great chunks of story to fit the screen time. Not to mention that the camera cannot go places where the author's imagination can reach.

2. Likeability. This is something else I touched on in my previous post. No matter what a character does, or why, you get the sense in the TV show that there is something redeemable about them. Not just with Damon, who is the obvious example, but with minor characters like Logan Fell or Tyler Lockwood.
The book does not achieve this. Maybe, if I read further than Book Two, I'll find something redeemable in those characters. But I don't think I'm going to persevere that far. And I won't even get started on how unlikeable the heroine is. Maybe that's a blog post on its own. I could not relate to someone who thinks of herself as The Queen Bee, and as a result I never really cared about her as I did about the Elena of the TV series. Or for Bella in Twilight, for that matter.

So what does any of this have to do with mediocrity?

Reading these books brought my deepest fear to the surface. What if my writing is only mediocre? What if my novels have as little impact on the reader as The Vampire Diaries books had on me? What if my characters don't hook the reader, and have no depth? What if it would take a whole team of experts to turn my books into something special?

I could shut down my laptop and go and hide under my duvet and never write another word. That would certainly save me from writing anything mediocre.

Or in the words of the editors from Mills & Boon: Innovate, don't Imitate.

I was about to hunt down The VAmpire Diaries books but taking it from you, I think I'll forgo it! I like the TV series too much!

Excellent post, Romy! I was just pondering Stephen King's take on secondary characters last week. It's hard to get those suckers well-rounded, especially with a limited word count. But it is soooo well worth the effort. It def makes the difference between an okay read and one that is spectacular!

Thanks for your comments Nas and Aimee.

Aimee - check out next week's post, as it's all about rounding out sceondary characters.

Hi there, i can say something, i am watching the TV series and i love, but as well i am reading the book and i am loving to read, i am on the book 5. The show is not following in the same way it is in the book, but is using every thing that is in the book, but telling the story differently ways, and for the show be in a different story this makes the books to be more fascinated to read, but have to say that the books and show are magnificantes I'm loving both.