We are thrilled to welcome Kimberly Lang to be an honorary minx today!
Grab a cuppa and settle in to read Kimberley's fab interview....


1. Where were you in your writing career 5 years ago?
The slush pile. ~grin~  I was licking my wounds from a rejection, about two months from getting another one,  and working on my third manuscript (which would become my 2nd book, THE MILLIONAIRE’S MISBEHAVING MISTRESS).  I was still over two years away from selling.  Wow.   Oh, the memories…
2. Where did you get the idea from for this particular book?
Hm, I don’t know.  My books normally start with the characters – or sometimes a scene – that I then have to play with until it becomes a big enough something to make a book out of.  I remember when the idea for GIRLS’ GUIDE  finally crystallized, though.  I was having coffee with a good friend and telling her about my marriage counselor heroine and the divorce attorney hero and she asked, “Were they married?” BING!
3. Where do you hope to be in 5 years time?
If I say “doing exactly the same thing as I am now,” it makes me sound like I don’t have any ambition, doesn’t it?   I love writing these books:  the strong heroines, the glamour, the sizzle. I also love the range I have in the line to be funny and light or tackle something a little heavier.  I can’t imagine what else I’d want to write!  So, can I be doing exactly what I’m doing now, only better, faster, and with a couple of fancy awards to show for it?
4. Which was the last book you read that you wish you'd written?
THE GIRL FROM MARS by Julie Cohen.  Julie has a twist in her brain that I can’t quite figure out, but her books are so great because of it – funny, quirky, and romantic. And anything by Julia Quinn – I’d love to write like that!
5. Was there any particular author or book that made you want to be a writer?
I spent my teen years devouring big, fat, historical novels --  Bertrice Small, Johanna Lindsay, Judith McNaught, Julie Garwood – and historicals are still where I turn for escapist reading.  (I love contemporaries and devour those too, but since that’s what I write, it’s not always the escape a historical romance is.) Those are the books that made me want to be a writer, because I wanted to make my own stories with happy endings.  More importantly, those are the books that made me a *reader.* It’s one of the reasons I went on to major in English in college  (and imagine my horror when I signed up for Romantic Literature and it was Wordsworth and that lot… sigh.).
6. What's the most romantic moment of your life so far?
I have a pretty amazing husband who’s not normally one for the big gestures.  Instead, he’s very good at the small, daily things that let me know I’m loved.  (Hey, the man thinks my mood swings are part of my charm and that my crazy is kinda cute.)   But romance-wise, probably when he packed up everything he owned in one suitcase and moved to the US because that’s where I was.  Seeing him come off that plane and knowing he’d left his whole life behind because he loved me and wanted to be with me… that’s a pretty romantic moment.
7. What do you wish you'd known about being an author before you were pubbed?
That it doesn’t get any easier.  Rejection hurts, but so does a bad review – and those are public!  Then there’s all the worries about sales and lists and the next book.  It’s a different set of problems, granted, and I wouldn’t trade them for anything, but this writing gig doesn’t get any easier on the other side of the contract.
8. What's the best writing advice you've ever been given?
Finish the book.  Most writers are told that in the vein of “you have to finish it in order to sell it.”  That’s true, but I’ve also learned that even when I’m not sure what’s wrong with a scene or the middle is sagging or whatever, finishing the book gives me the information I need to go back and fix the problem.   Being able to see the book as a whole gives me insight into the individual bits.
9. What does the new Riva imprint mean for you.
Hopefully, Riva will hook that reader who thinks all romance novels are the same, or that there’s nothing really in the genre to appeal to them. Riva is fresh and fun, with a variety of voices and stories.  The new covers and titles really reflect that fresh feel, and will hopefully introduce those readers to the joys of romance novels!  These aren’t your Grannie’s romance novels, that’s for sure!
10. Tell us about your Riva launch release. 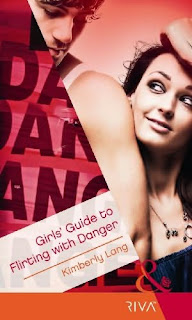 GIRLS’ GUIDE TO FLIRTING WITH DANGER
Rule #1 — Don't even flirt with your ex — let alone sleep with him!
Life is good for marriage counselor Megan Lowe—until the media discover that she’s the ex–wife of Devin Kenney, America's most famous divorce attorney! Now the paparazzi are digging for a scoop just in time for the launch of Devin's new book. His gorgeous smile smirks at Megan from magazines and billboards — making him infuriatingly impossible to forget…
It's time for Megan to throw her very bossy rulebook out of the window and face her dangerously sexy ex. And their sizzlingly hot reunion — well, that's most definitely headline news…
I’m very excited about GIRLS’ GUIDE TO FLIRTING WITH DANGER.  It’s a reunion story with two very strong characters.  I love reunion stories, because there’s so much conflict already built in.  And a lot of sexual tension, too! Megan and Devin were so much fun to write, and I’m so thrilled they were chosen to help launch the new Riva line.
11. What’s next for you?
I’m currently working on a series of books connected by three brothers from a political dynasty.  Handsome, powerful, rich… the kind of heroes I love.  And I’m matching them up with heroines guaranteed to drive them insane ~grin~  The first of the three, THE PRIVILEGED AND THE DAMNED, will be out in the UK in June.
You can catch up with Kimberly here....
www.booksbykimberly.com
www.writingplayground.com
www.writingplayground.blogspot.com
Kimberly is offering a back list book to one lucky commenter - so don't be shy, leave a comment and start the year with an awesome read.

Thanks for taking the time to blog with us today Kimberly, and the very best of luck for your exciting Riva launch title!
Posted by Kat at 1/05/2011 06:00:00 AM

This sounds like a really exciting novel and I'm looking forward to reading it.

Thanks so much for joining us here at the Minxes today!

Aww, I always get a tear in my eye when I read about other people's most romantic moment. Your hubby sounds lovely :-)

Also it's great to be reminded that while our rejections and private, reviews definitely are not. Time to start growing rhino skin, I think!

As an author sitting in the slush pile, it is very encouraging that I will make it out.

Hi y'all! Thanks for having me here today, Romy!

Joanne -- yeah, my hubby is lovely (most days at least. Today, I'm stuck unpacking and doing the laundry from a 2 week trip, so he's not as lovely at the moment...). And, yes, grow your rhino skin now. It helps in the long run!

Erika -- the slush pile isn't a sexy place -- the "Call" stories aren't as interesting, for one thing -- but the slush still works. Never be upset you're in the slush pile. :-)

This book sound really good. Definitely going on my wishlist. Thanks for sharing. I think it's great that your husband came here to be with you. So sweet.

Thanks for visiting us today, Kimberly. I'm really looking forward to reading Girls’ Guide To Flirting With Danger.

Thanks for being uber minxy today Kimberly! Am going to take your 'finish the book' mantra to heart - it's not one of my strongest points, but it is my NY resolution to fix that.
Jo
x

Fantastic interview and I just love the three brothers from a political dynasty! Congrats on your RIVA release!

Danielle -- my Geek has been known to remind me of his big romantic sacrifice occasionally if he's in trouble or wants to win a few merit points!

And thanks all you minxes for having me! Hope y'all get a chance to read Girls' Guide and let me know what you think.

And Joanne, let me know when you finish that book... (I can nag with the best of them...)

Thank you for sharing this great interview with us !A big congratz on your Riva release !
All the best
Desere

Hi Kimberley - great interview, we're a lot of lucky minxes to have you visiting! Love the look of your latest release, its very encouraging to think that 5 years ago you were in the slush, sometimes its hard to remember people do get out of there! especially after an R :(.

Great interview, Kimberley, and congrats on your release! Like Sally, I'm encouraged by the slush stuff too. Had a few Rs last year that were hard to take so it's inspirational to hear about people receiving them and going on to sell!

Sally and Jackie -- ((Hugs)) on the Rs. I won't tell you the pain will pass -- because I can still quote a couple of my rejection letters, and yeah, I'm still a little bitter -- but look at them as battle scars. It will give you good stories to tell one day (and I reserve the right to hate anyone who sells their very first book without ever being rejected simply on principle!).

As for the slush... well, there's no joy being in the slush pile, but there's no shame either. The folks who win contests, get requests, and then sell have better stories to tell, but, in the end, the Slush Babies have the same thing: a contract.