This week we're excited to welcome Julie Cohen back to the blog and to hear all about her new release with Headline.

In October 2005, I was working on my fourth Mills & Boon book, MARRIED IN A RUSH. I’d sold my first title back in July 2004, but because of scheduling and line changes none of them were due to start coming out until March 2006, when my first book was going to be a lead title for the new Modern Heat line. So I was steadily working on building a backlog of titles to be published. Meanwhile, my agent was working on selling my first single title book, SPIRIT WILLING, FLESH WEAK. Though I wasn’t actually published yet, because of all this frantic activity going on behind the scenes, within a year I would have five books out with two different publishers. A level of overachievement which I hope to never have to match again.
2. Where did you get the idea from for this particular book?
I am a total sucker for twin stories. To the extent that when I ordered books for research for writing GETTING AWAY WITH IT, I realised when they turned up that I’d read several of them already. I also love, love, love writing books about deception and identity. So the idea of a story about a woman pretending to be her identical twin sister wasn’t new, but it was irresistible.
3. Where do you hope to be in 5 years time?
On a Greek island, lying on a beach, being fed ripe grapes and retsina by David Tennant. Oh, wait. You mean in my career? Well, I have wild dreams of course of hitting bestseller lists and being invited to amazing parties et cetera, but really, I’d like to still be published, still be making a living by writing books. It’s been my lifelong dream and I can’t imagine anything better.
4. Which was the last book you read that you wish you'd written?
TAKE A CHANCE ON ME by Jill Mansell. Jill has a wonderful, effortless way of instantly drawing you into her characters’ lives. I love her voice, and I love how she makes you laugh and makes you care. There were some really touching moments in this book, too. Also, when I read it on a train, women who also love Jill Mansell books started chatting with me. Fab.
5. Was there any particular author or book that made you want to be a writer?
The Earthsea trilogy, by Ursula LeGuin. When I was ten or so, her richly-imagined fantasy world blew me away and I immediately started working on my own (blatantly ripped-off) version. Drew a map and everything. The map was way better than the story.
6. Do you find writing love scenes giggle-worthy or cringe-worthy?
Neither, really, though more giggly than cringey. As my books have got longer, I’ve found myself writing fewer and fewer sex scenes and they’ve started to be even more emotionally important. So I take them pretty seriously. That said, I may occasionally indulge in a glass of wine or two while I’m writing them, and then I might giggle. A bit. Well, okay, a lot.
7. What's the most romantic moment of your life so far?
I used one of my first advance cheques to pay for a holiday in Venice for me and my husband. As the holiday was because of romance, we agreed he would kiss me every time we crossed a bridge. And there are a lot of bridges in Venice.
8. What do you wish you'd known about being an author before you were pubbed?
How the writing itself doesn’t get much easier. Sure, the experience of having written several novels definitely helps. And it helps to have professionals on my side, giving me advice. But the actual writing can still be hard work, and I’m still beseiged by crows of doubt on a regular basis. I thought once you were published, it all got to be second nature. Ha! As a matter of fact, I’m more neurotic than I ever was before—not least because I know exactly how lucky I am to be published!
9. What's the best writing advice you've ever been given?
When I was starting out, bestselling M&B Modern author (and dear friend) Kate Walker told me, “Don’t be afraid of emotion.” Like so many beginning authors, I was afraid of really digging deep into my characters and putting them in situations where they would suffer. I liked my characters too much to put them through it. But if they don’t suffer, they don’t learn. And if they don’t learn, they can’t earn their happy ever after. I still use that advice today, often in revisions where I have to uncover another layer of emotion.
10. Tell us about your latest release.
GETTING AWAY WITH IT is my first standalone women’s fiction title with Headline Review. It’s the story of stunt woman Liza Haven, whose life is shattered when a film stunt goes horribly wrong. She goes back to the village where she grew up with her perfect identical twin sister, Lee—only to find that Lee has disappeared, leaving behind their difficult mother, their flagging family business and a dangerously attractive boyfriend. What’s more, everyone in the village thinks that Liza is Lee.
It’s a book about identity, disappointment, love, danger and the true meaning of ice cream, and it’s out in hardback and trade paperback on 28 October. It’ll be out in mass-market paperback in April 2011.
11. What's next for you?
Right now I’m working on my follow-up book to GETTING AWAY WITH IT. It’s another contemporary women’s fiction novel, about a woman who gets a job in a stately home where everyone’s pretending it’s 1814. It’s sort of two stories in one—the contemporary story, and the Regency story—and it is just fantastic fun to write and research. I’ve been going to Regency re-enactment events and meeting fascinating people. That book should be out in 2011.
Thank you to the Minxes for having me again!
You can order the discounted hardback of GETTING AWAY WITH IT with free shipping here:
http://www.bookdepository.co.uk/book/9780755350605/Getting-Away-With-It 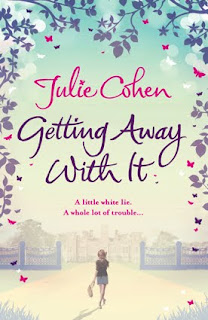 COMPETITION: If you’d like a chance to win a rare, exclusive early reading copy of GETTING AWAY WITH IT,
all you have to do is sign up for Julie’s newsletter. She’ll be holding a draw on her website to give away three copies. If you’d like to enter, either:
a) leave your email address in a comment to this post (to be safer from spammers, replace the @ symbol with the word “at”).
OR
b) send Julie an email: julie at julie-cohen.com (replacing, as above, the “at” with the @ symbol) Use “contest” or something similar as the subject line, so I know it’s not spam.
This is open to anyone, worldwide..
GETTING AWAY WITH IT
A little white lie. A whole lot of trouble...
Coming October 2010 from Headline Review

Ooooh, I love your romantic moment!!! Thanks so much for being with us today! I love the premise of your book and the cover is to die for :)

Thank you for turning minxy for the day, what a fabulous and fun interview!

Have just read your guest blog over on the writers playground about Disney cars movie - I have two little guys (4&6) so have seen that film MANY times and totally agree that it rocks, can see exactly where your inspiration for 'Getting away with it'. Can't wait to read it. x

Thank you, Maya and Joanne! It's always lovely to be a minx for a day.

Maya, I loved my romantic moment too. :-) Venice is absolutely amazing, I'm so glad I went there.

Joanne, CARS is truly a classic. I've watched it too many times to count, but at least I've learned something.

Julie, the book sounds fab!! ;) I've gotten my grubby mitts on one of your MHs and I thoroughly enjoyed it.

And also...your romantic moment...ahhh...I used my first advance check to buy a couch and a dining set..is that not romantic?

Thanks for being on the blog Julie, I'm looking forward to reading your new book and hoping it may get released onto iBooks so I can get my ipad to read it to me!
Thanks again.

Julie, I'm so excited about your new book! And wow, what a romantic thing to do with your first advance...!

Kate Walker gave me some fantastic advice about conflict. I will never forget her onion analogy!

I'd love to receive your newsletter! talliroland AT gmail.com. Thanks!

Maisey, a couch and dining set is SO romantic. All those candle-lit dinners, and snuggle time on the couch...

Lorraine, thanks for inviting me. Getting Away With It will be out as an e-book, next April I think. I hope it works on your lovely lovely iPad.

Thanks for signing up, Talli. And Kate is the queen of conflict, isn't she? That advice struck me like a lightning bolt and it transformed the way I write. Brilliant stuff.

I love the sound of Venice too :)

Great writing advice and I also love that getting published has made you more neurotic. You sound completely sane Julie ;) Great interview!

The meaning of ice cream ... mmm, that's sold the book for me. Now if you tell me it's the meaning of Haagen-Dasz Bailey's ice cream it'll even move right to the top of the TBR pile!

Ah, the ice cream thing needs some explanation. See, the heroine's family runs an ice cream factory called Ice Cream Heaven, and that's one of the things that Liza has to take responsibility for when her sister disappears. But Liza hates ice cream, whilst her sister loves it. So she has to resort to some creative solutions to help the business.

There are lots of different flavours in the book, all with fun names like Goody Two Chews and Bananas From Heaven—my friends and I had a great time coming up with them.

I had to tour an ice cream factory as research for the book. What a hardship, huh?

Great post, Julie! I'd completely forgotten about the Earthsea trilogy, and I loved them when I was growing up! Love the sound of your new one..