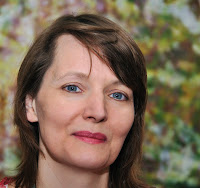 This week we have the lovely Heidi Rice answering our questions and telling us all about her latest release,'Unfinished Business with the Duke'. It's her seventh Mills and Boon Modern Heat no less! Leave a comment and you're in with the chance to win a copy. If you're not lucky enough to win then you can get your copy from Amazon or as an ebook from the Mills and Boon website.

Five years ago I was unpubbed and had yet to finish a manuscript… I’d written lots of great scenes for the one I finally completed and submitted to Silhouette, but hadn’t actually got round to stringing them into a coherent book. I did finally do that, but I still had a fair bit of faffing to do before that happened.

2. Where did you get the idea from for this particular book?

Unfinished Business with the Duke came together from two initial ideas. I wanted to do an architect hero – because I think there’s something really attractive about men who are passionate about what they do (and in my experience architects usually are). Also about two years ago I went to a romance writers do at a gentlemen’s club in Mayfair. One of the members gave us a little tour and I had this spark of inspiration… Wouldn’t it be fun to stick a half-naked woman into this all-male, very posh and proper environment? Then I had to figure out how to do that without her being a prostitute!

Just about every book I read I wish I could have written. But most recently I’ve had severe writer’s envy of Susan Wiggs’s Fireside (and all her Lakeshore Chronicles actually), Nora Roberts’s Savour the Moment (read that in one sitting as a reward for getting my last book accepted) and Audrey Niffenegger’s Time-Traveler’s Wife (even though the ending left me emotionally drained!)

5. Was there any particular author or book that made you want to be a writer?

6. Do you find writing love scenes giggle-worthy or cringe-worthy?

Neither. I adore writing love scenes. Which probably has something to do with the fact that I believe in living vicariously through my heroines – who are of course me (but with better hair and trimmer thighs).

Gosh, I’ve had quite a few… And I have to admit not all of them with my husband. But the best was going to New York for the World Cup finals in 1994. We’re both big football fans and it was Ireland vs Italy. My dad was Irish and my husband’s from Italian American stock, but he took it with remarkably good grace when Ireland won, to the extent that he suggested we go down to Manhattan City Hall the next day and get hitched! We bought a couple of rings on Eighth Avenue, had a two-minute ceremony, I got my picture taken with some plastic flowers on the steps outside, we went to the Rockefeller Centre for brunch and then rang our mums and our one-year-old son to let them know. No drama, no fuss, just romance and football, two flabbergasted grannies and one very confused toddler! The perfect wedding.

8. What do you wish you'd known about being an author before you were pubbed?

How to read royalty statements… Actually I still wish I knew how to do that.

9. What's the best writing advice you've ever been given?

Well, I’ve always liked Nora Roberts’s ‘you can’t edit a blank page’, which comes in mighty handy when I’m staring at a page full of crap. But the other one is ‘don’t give up’. In the end it’s only the people who can keep going through all the rejections and set-backs that get published and once published can make a career out of it. I sincerely believe that being a successful writer is 10% talent, 10% luck and 80% perseverance.

Unfinished Business with the Duke is about a feisty pub-theatre manager called Isadora Helligan who has been reduced to doing singing
telegrams to save her ailing theatre in Islington. Unfortunately for her, she has to be rescued from a group of plastered Hooray Henries in a
Mayfair Gentlemen’s Club who mistake her singing telegram for a striptease. And even more unfortunately, her knight in shining armour
happens to be the man who took her virginity at 17 and who she has vowed to hate for the rest of her natural life after he promptly broke her
heart. Issy’s nemesis is a drop-dead gorgeous Florentine architect called Giovanni Hamilton - the son of a British duke and an Italian socialite.
And after Gio rescues Issy, it’s obvious that even after ten years apart, the sexual chemistry between them is easily as incendiary as their past.

My next book after Unfinished Business is Surf, Sea and a Sexy Stranger which is due out in December in the UK – about an ex-surfer and a
female lifeguard (cue a great opening scene where the heroine pulls the injured hero out of the surf) and some very hot nights in a Cornish
cottage on a cliff path. And I’m currently working on my ninth book for Modern Heat, which at the moment is about a voluptuous, free-spirited
and somewhat reckless cupcake entrepeneur who loves to flirt and meets her match when she has a fender bender in a Hampstead street one
sunny August afternoon with a devastatingly handsome barrister who always plays to win.

Many thanks to Heidi for answering our questions. Don't forget to leave a comment if you want a chance to win your copy of 'Unfinished Business with the Duke' 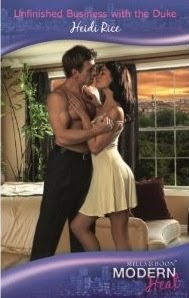 Great interview, Heidi. Also good to learn more about you.

Fab interview Heidi, fun and inspiring. Love the sound of the current wip, cupcakes are high on my list of life's necessities.:o)

Heidi, that's a great wedding story. :-) And HELLO look at that cover!! WOW. I mean...I'm looking at the composition and the artistry...and, okay...mostly the muscles.

And, the book sounds fabulous, the title for the next one is amazing. You rock. :-)

Just popping in to say "hello" to the Minxes and Heidi. Don't enter me for the draw as I have Heidi's fab book. Whoever wins is in for a treat! Bye! Caroline x

And I love architect heroes too. Will have to get that. Actually, all the stories you mentioned here sound fabulous. So will keep an eye out.

I love the idea of your heroine rescuing the hero from the surf.

Great answers Heidi, I was particularly struck by the writing advice one.

Thanks for visiting our blog :-)

You're so welcome guys, really enjoyed answering the questions, especially the one about writing love scenes LOL.

And honestly, as I'm sure you guys already know, getting published has a lot to do with perseverance. And I also like to believe that every knock back I suffered made me a better writer.

Fab interview, Heidi! Loved Unfinished Business. And the lifeguard one sounds cool. Roll on December (except November for us ebooks readers hehehe).
Oh and loved your romantic moment! Perfect. :-)

I've read the excerpt for Unfinished Business and man is it hot! Love your writing Heidi!! Can't wait for this one to come out :)
Love your romantic moment, such a great spur of the moment wedding, congrats!!

Heidi, great to have you with us today. I agree with everyone, what a fab wedding story. Very nice cover too, love the title!

Lovely wedding story, Heidi, one for the grandkids :) Your book sounds great, I love the title. Oh, and I caught you on tv, think it was over Valentine's day period? I blinked twice to see a M&B author up there, and then I yelled at the entire family to come take a look.

Gee thanks again guys! Great to see so many familiar faces here. Glad you liked the wedding story... It really was the perfect wedding for me, I'm just not the white-dress-walking-down-the-aisle type, at all... And I forgot to add that we threw a big party for all our friends and family when we got back which we billed as 'A wedding without the boring bits!'

And Claire, chuffed to bits that you caught me on Breakfast TV.. I had such a ball, not least of which was getting my own personal make-up artist... Oh, the glamour of it.

Thanks so much for guesting with us and answering our Minxy questions. You're an Autobuy for me, but I'll admit 'Unfinished Business' is still sitting in my TBR pile. This spotlight has just moved it to the top of the pile, though!

What an inspiring post! Like Romy you're an autobuy for me and I've already read your delicious Duke! Bring on Dec for your next hit!

Love the premise of Unfinished Business with the Duke! Fabulous

I love the sound of these books and have to agree that Heidi's wedding sounds pretty perfect to me.

The wedding sounded perfect to me too!
Can't wait to get my hands on one of your books!
Great interview!

What a great interiew. Good to know even published writers do a lot of faffing with manuscripts! I do faff a lot.
Best wishes for your new book, Heidi!

When you learn how to read royalty statements, let me know! Why can't they just give two figures - books sold and amount earned. That's all we need to know.

Just wanted to pop back and say a big thanks for to the Minxes for inviting me... Have had a ball... And popping back to read the really lovely comments has given me a great excuse to avoid my current ms (more's the pity!)