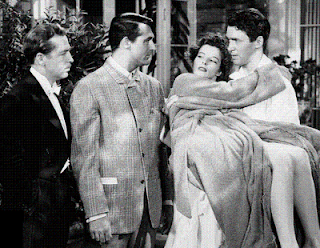 The Philadelphia Story is my favourite movie. In its original form it’s a total classic. It was made in 1940 and remade in 1956 as High Society. But don’t let that put you off. The original is fantastic and here’s why.
First the cast. It’s a huge ensemble cast of Cary Grant, Katherine Hepburn, James Stewart, Ruth Hussey, and John Howard. The director is legendary George Cukor, and the scriptwriter was Donald Ogden Stewart. The acting is brilliant. And the script? The script is to die for.

Here's a dialogue run featuring CK Dexter Haven (Grant) and his ex wife Tracey Lord (Hepburn):
C. K. Dexter Haven: Sometimes, for your own sake, Red, I think you should've stuck to me longer.
Tracy Lord: I thought it was for life, but the nice judge gave me a full pardon.
C. K. Dexter Haven: Aaah, that's the old redhead. No bitterness, no recrimination, just a good swift left to the jaw.

The story begins just before the wedding of Tracey Lord (Hepburn) to George Kitterage (Howard). But she’s been married before, to C K Dexter Haven (Grant), who turns up with a gift, just when everything is going badly wrong for the Lord family.

There’s a complicated side plot, featuring Tracey’s father and uncle, and a couple who move in to do a ‘social segment’ for a newspaper, played by Stewart and Hussey.

James Stewart’s character, the disillusioned reporter Macauley Connor is prepared to hate the rich, entitled heiress Tracey, but falls for her instead. His photographer, Elizabeth Imbrie is in love with Macauley, and accepts his infatuation with Tracey stoically. He’ll come back to her in the end. She knows it, we know it. But getting there, that’s where the fun begins.

Cary Grant is suave, charming, and totally irresistible (IMO) and must have been delighted to be given such a wonderful script to play with. Tracey Lord is hailed as a goddess by most of the men in the film, but CK Dexter Haven knows better. He knows her faults and loves her despite them.

Also, the opening sequence is the funniest thing I’ve seen. Ever. I’m totally incapable of watching it once, I have to rewind and watch it at least twice before continuing the film. And, as this is a classic film, it can be picked up for buttons most everywhere. Try it, it’s a delight.


Now hot news just off the presses about a great new competition!

The National Trust, Mills & Boon and The Lady short-story competition. Readers are encouraged to submit a romance based on or in a National Trust property – be it about a proposal on a coastline, a wedding in a castle, a love affair between butler and housekeeper. The winner will see their story published in a late summer issue of The Lady. The story should be 1,500 to 2,000 words.
For rules and more details see The Lady, or The National Trust competition link.
For those living in the UK, there are also two hour writing workshops at National Trust Properties with our favorite Mills and Boon authors and one Mills and Boon editor, for £15. This competiton is closing on 31 July, so if you're interested, get writing!

Finally, the winner of Wednesday's Heidi Rice competition is Joanne Pibworth. Please drop the minxes an email with your address, Joanne and Heidi's book will be winging its way to you.
Posted by Sally Clements at 6/18/2010 12:06:00 AM

Ohhh thanks for the tip re "The Lady" writing competition. I've just popped over to have a look see. Kind of spooky in some respects as they mention "Lady Caroline who lived at Plas Newydd on Anglesey." *I'm* a Caroline who lives not 5 miles from Plas Newydd!! I'll have to visit there (I know shame on me for not having been there before!) and see if I get any "vibes" from another era. Will definately have a go at the short story tho'! Thanks. Caroline x

It's moments like these when I wish I was back in the UK. You are such lucky things for having workshops like these on your doorstep. And the National Trust and all those gorgeous buildings and rich history too!

The workshops sound fab don't they, and as two of my favourite people are doing them, India Grey and Kate Hardy, I'd highly recommend them...

Also OMG The Philadelphia Story, what a classic. I love this movie! Cary all suave and gorgeous but also surprisingly alpha and Kate Hepburn giving him a run for his money in the wise-cracking stakes and then Jimmy Stewart, tall, lanky and besotted but with a definite edge.

I liked High Society too, mostly for Frank Sinatra singing Who Wants to Be a Millionaire, so why did Grace Kelly choose Bing Crosby (who looked about 100 years old)!

Good luck to anyone entering the competition. A chance to meet India Grey is a definite incentive. I think she's fab!!!

Caroline, that sounds like an omen to me - get your entry written asap.

Philidelphia story will be going on my dvd wish list!i love old filmsx