Today we have two for the price of one. Two minxes - Lorraine Wilson and Suzanne Jones reviewing two films. 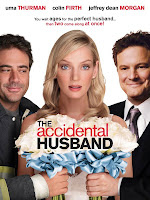 The older I get the less patience I have. So nowadays if I put a dvd in the player and don't like what I see I hit the eject button, sometimes after only 5 minutes!
The other evening I put 'The Accidental Husband' on with very little expectation. In fact I was dreading another romcom cliche but to my relief it wasn't anything of the sort - it was fresh and funny and it made me giggle, lots. Quite an achievement given I'm exceptionally grumpy in recent months and was really stressed out before I watched the film. I believe I even said 'ahh' at one point but thankfully only the dogs were around to hear me :-)
And when the black moment hit I found I genuinely cared about the characters getting it together.
I don't like giving out spoilers so I'm not going to tell you too much about the plot. The basic line is that radio host Emma Lloyd (Uma Thurman) advises one of her listeners to break up with her boyfriend and the jilted ex (Jeffrey Dean Morgan) then sets about getting his revenge and she ends up, um, accidentally married. Really it works, honest and it will make you laugh. 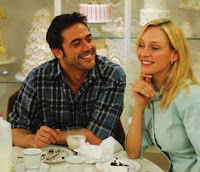 The only cliche was that the guy Emma (Uma Thurman) was originally 'settling' for (played by Colin Firth) was new-mannish and the guy she was supposed to be with was an alpha fireman. But with a cliche like Jeffrey Dean Morgan in a fireman's uniform who cares?

In short the film did everything a romcom should - it made me laugh, made me care and it made me leave it playing until the credits were rolling.

For our second film, take one coachload of assorted tourists, a sprinkling of breathtaking Greek scenery, a hairy-man bus driver and the delightful Nia Vardalos as the tour guide and what do you get?

Driving Aphrodite is what.

There are no baddies, no exciting chase scenes and the humour is gentle rather than laugh-out-loud funny. But, I really enjoyed it and huge thanks to lovely Judy Jarvie for recommending it.


In my experience, men with beards sometimes have something to hide, however, you'll be pleased to know the hairy man in this film soon cleans up his act and undergoes a metamorphosis into a creature who is extremely easy on the eye. Worth watching for his beach scene alone.

Definitely a movie for a Saturday afternoon and definitely to be watched with a large box of chocolates.

Thanks for the reviews Minxes. I loved "Driving Aphrodite" (though here in South Africa it was released as "My Life in Ruins") and I might just go and rent "The Accidental Husband" this weekend.

Thanks for pointing that out Romy - I should have mentioned it's also known as 'My Life In Ruins'.

'The Accidental Husband' sounds great, Lorraine - and it has Colin Firth (sigh). Will look forward to watching it.

I loved The Accidental Husband, Lorraine. I went into the watching of it with as much trepidation as you and totally "ahhh"ed too by the end!

Suzanne I haven't seen Driving Aphrodite, but it sounds like a movie I'd love to watch. Movies come 2nd only to reading. So much so I ended up working in two video stores before I was 21 (a girl has to find ways of watching her favourite movies without paying, eh?)!

I liked the Accidental Husband too, and haven't seen Driving Aphrodite yet, but will definitely be getting it out! (Great title too!)

Oh, the Accidental Husband sounds great! Thanks for the recommendation Suzanne!

Accidental Husband- i would be drooling through out!
Driving Aphrodite- I'll watch anything set in greece!

I haven'd seen Drivint Aphrodite, but love The Accidental Husband and have the DVD. I love Jeffrey Dean Morgan (swoon) so would watch anything with him in it.

I love movies, too, Maya.

I've ordered The Accidental Husband, Sally - after Lorraine's terrific review and Maya and your recommendation I decided I had to see it.

Can't wait to watch it, Maisey.

Hi Jenny, hope you enjoy them.

Hi Debs - I'll be watching The Accidental Husband as soon as the postman brings it.

It's eating my comments... what does that mean?? I loved The Accidental Husband and might just stop writing long enough to hire My Life in Ruins.