In my previous post, I explained why I loved the TV series version of The Vampire Diaries, but the book version not so much. I said that the book never really made me care enough about the characters, and that many of the characters came across like cardboard cut-outs. Since I wrote that post, I've been mulling over why that is, and I think I've come up with an answer.

In the books (at least the first two, since I haven't had the enthusiasm to read beyond those) the reader never really gets a sense of what the secondary characters want. Their sole pupose is to give the main character, the heroine, someone to react to.
An example: her aunt is a student, engaged to be married, looking after her two orphaned nieces, and who makes her dislike of the heroine's boyfriend clear. Period.

Considering how much more information the written word can share compared to a film camera, I feel the author missed a few tricks here.
What does the aunt want from her life? Is she getting it? How does she feel about her situation: is she coping, resentful, happy, tired? Is she pre-occupied with wedding preparations? Or even: how did she meet her fiance, a shadowy character who barely exists except as a name on the page?
A simple line here or there showing any of the above could have rescued this character from cardboard cut-out territory!

In the TV series, the screenwriters have given every single character, no matter how minor, motivation. They all want or need something. They all have flaws and strengths. They all have feelings. Suddenly they become real people. They become characters that the viewer cares about.

Watch the first couple of episodes and do this exercise: Make a list of the supporting characters. Then next to each one name their flaw, their strength, their desire, and their main emotion. 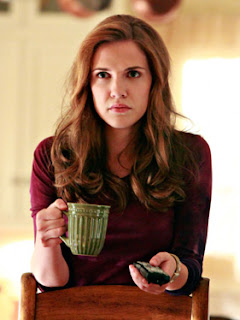 For example: The heroine's aunt Jenna.
Flaw: too young to be responsible for two orphaned teens.
Strength: her humour and compassion.
Her desire: to help her niece and nephew cope with their tragedy and raise them as good people, all while completing her own studies.
How does she feel? Out of her depth, inadequate, determined.

Even though she's a minor character who appears in only a couple of scenes, we get all this from her interaction with the main characters in those scenes.

Now I want you to do this same exercise for every character in your own WIP. Do they all have strengths and weaknesses? What are they feeling? What do they want? Will they get it?

Even if this background information never makes it onto the page, you will know your characters well enough to turn them into real people. Though I do suggest, even if it's just a line here or there, that you should at least make it clear to the reader what this character wants and why. Yes - even for the supporting cast.

Because it is the Why that makes readers care about your characters, and if they care, they'll keep turning the pages.
Posted by Romy Sommer at 2/07/2011 10:00:00 AM

What do they want? Will they get it?
I love it. And of course, to make they story interesting, the answer to the last question should be 'nope'. Not until the very very end anyway!
Great post, Romy!