Acting out of character

I am nothing if not consistent. It’s a Monday and I’m blogging, which means this post will have a lot to do with writing, and at least a little to do with The Vampire Diaries.

In order to be believable, your characters should be consistent. In real life, most people behave in set ways. I obsess about The Vampire Diaries and writing (no necessarily in that order). Your colleague who keeps his desk exceptionally tidy is unlikely to suddenly turn into a complete slob. The devoted PTA mom who volunteers in the tuck shop and runs the lift club is hardly likely to take off unexpectedly for Vegas without telling anyone.

Exceptions to the rule

Yet as important as it is to keep your characters consistent, behaving in believable, established patterns, there are exceptions to every rule.

There are two instances when you might want your characters to deliberately behave out of character.

Firstly, inconsistent behaviour can spark a really interesting story. Did the neat freak colleague snap because he came home to find his wife had left him and taken everything? Why did the PTA mom suddenly take off for Vegas, leaving her family in the lurch?

Example: The young woman who dreams her whole life of getting married, runs away from the church on her wedding day. Why can’t she face going through with this marriage? Has she just learned something that changes everything she believes in?

I was raised on the maxim of “all things in moderation” and this is one instance where that definitely applies.

A character who swings from one extreme to the other, never being consistent, is simply going to annoy the reader. But get him or her to act out of character just once, at the moment when it has the greatest impact, and you’ll have your reader gripping the edge of the seat.

Similarly, too many characters behaving inconsistently, and it’ll appear to the reader that you don’t have a grasp on your characters. As the writer, you need to make a conscious and deliberate decision as to which character is going to behave inconsistently, when, and why.

As always, we’re back to Motivation. Readers will forgive you (and your characters) almost anything if they understand the why. You just need to decide how and when you’re going to reveal the why.

The easiest way is to give the reader advance warning of what’s coming. The bride is on her way to the church when she discovers that her parents, devoted to one another for thirty years, were never really married. The reader, following her POV, understands her realisation that maybe love is more than a piece of paper and a big white dress. (Whether her fiancé understands is another matter entirely!)

Alternatively, you can leave the reveal until after your character has done something completely inconsistent with who they are. Don’t let the reader see it coming. Don’t leave clues along the way.

Take the reader on a journey right to the altar, where the groom hears that his bride has done a runner. Allow the reader to experience the shock with him. Then shift to her POV, where she's getting on a plane for the Bahamas, and then reveal her motivation.

This may be a little harder to pull off in deep POV, but in the hands of a skilled writer, this technique can have your reader gripping the edge of the seat (and leaving hubby to cook dinner!).

This is where The Vampire Diaries comes into this blog post. 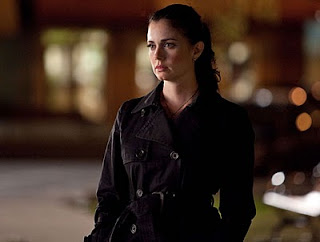 In the penultimate episode of Series 1, we meet the vampire Isobel, played by Mia Kirshner.

Isobel makes her appearance quite late in the series. She’s a fairly new vampire, and she has history with a number of the regular characters.

Throughout this episode we see her as deceptive, heartless and inhuman. She threatens, she blackmails, she hurts, she kidnaps. By the end of the episode the viewer has come to know Isobel quite well. They understand that she is capable of absolutely anything to get what she wants, including murder. And we fully expect her to laugh at the moment she commits murder.


* Spoiler Alert *
Her final scene of the episode is only about two minutes long. Isobel has achieved what she set out to achieve. This is her moment of triumph. She sits in the back seat of her car as she is driven out of town; presumably out of the series. She makes a phone call that turns the entire episode upside down. 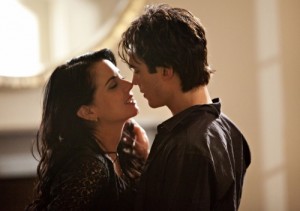 As the end credits roll, the viewer starts to replay the episode in their heads, seeing everything in a completely new perspective.
That is powerful writing.

As the awesome Bob Mayer often says, you need to understand the rule before you can break it.

I LOVE your example. It's so true that with the right motivation anything is believable.

As always, Romy, EXCELLENT post. Yes, it takes a very skilled hand to believably pull off the reversal you've described. Sometimes I think it's best to write a story, and then rewrite it BACKWARDS to get it right. I was forced to do that in one MS.

Oh, and the PTA mom ran off to Vegas because she's a closet compulsive gambler :)

Nas - I could be wrong but I think Romy's talking about Isobel's scenes at the end of season 1?

I was on wikipedia the other day and was horrified that the final episode isn't airing until April! Talk about drawing it out lol!

Lacey, I remember now. She was being driven away and rings up John Gilbert, then she makes another call. In that call she talks to someone...yeah!