Since today's spotlight author has already been interviewed here fairly recently, we're going to do something a little different today: Rae Rivers has done a guest post instead of the usual interview. Welcome, Rae.

What Kind Of Writer Are You?

This December holiday will consist of an adventure trip of a lifetime as we join two other families to tackle an exciting 4x4 road trip through South Africa, Botswana and Namibia. Three weeks of travelling across tricky terrain through three African countries, children in tow, to reach various lodges or campsites amidst the wild animals. It’s untamed and a bit unnerving because of my kiddies, but we’re so excited.

We recently had a casual dinner to plan our trip. Three couples around my dining room table, surrounded by wine, maps, and all our children which gave us a taste of what it would be like to travel with six children at once. Fun chaos!

This got me thinking afterwards about the different approaches we had on planning this trip and I realized that my approach to it was a lot like the way I approach my writing:

Planning it
Many authors plan their story from the beginning to end, map everything out, and seldom deviate from that. Like the first couple headed through Africa, they plan their stops and work towards reaching each one. They have a blast, but they stick to their plan. It’s what works for these authors and makes them great storytellers.

Winging It
Other authors wing it, like the second couple planning our trip. They have a general idea where they’d headed, the route they need to take, and the places they want to stop. But nothing’s set in stone. If a place feels right, they stay, if not, they move on. They’re flexible and handle whatever comes their way. This writing style is sometimes the hardest but works very well for many authors.

Bit of both
For me, writing is a little of both. I have the entire Keepers series mapped out. I know how the final book is going to end and various plot points that need to be written in order to get me there. I’ve just written The Keepers: Sienna. I mapped out parts of the book and the ending. But that’s it. My editor and I discussed a brief outline of the plot but I warned her that she shouldn’t’ be surprised if I steered off track slightly. Once I start writing, I head for the markers that I’ve plotted but I get so wrapped up in the characters that they’re the ones that drive the story. Sometimes they head for these overnight stops without veering off course. Other times, they take a wrong turn and eventually get there. There are also times that they never do.

So yes, like travelling, I’m a planner when writing, but I also wing it according to the characters and the moment they’re in. Sometimes it works brilliantly, other times it’s frustrating because they take me to places I’d never considered – and this often requires a complete regrouping of the entire plot.

But in the end, my characters are exactly where they need to be.

So, what type of writer are you? 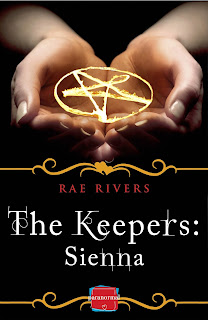 A full moon in Rapid Falls.

Sienna Beckham is a powerful witch, and along with her four fiercely protective Keepers, it is her destiny to maintain the balance of nature in this world.

Tonight, it's the town carnival and everyone will be there: Sienna's family, her friends, her protectors. Archer.

But in a few hours, Sienna's life will have changed forever and her powers stretched to their very limits.

For something is lurking in the forest…

And no one sees it coming.

Find out how it all began…

The Keepers: Sienna is available from Amazon, Amazon UK and Barnes & Noble.

I'm an avid reader and writer with a passion for writing romance novels. I live in Cape
Town, South Africa, with my gorgeous husband, two beautiful children and a zoo of house pets.
Besides writing, I love family time, the outdoors, travelling, watching TV series, reading and
chocolate. For more information about my books, or me, please visit www.raerivers.com