Failure as the Key to Success

I stole that title from Matthew Wright. Yes, while I was working from home this morning, I had the TV on for company. Nobody believes me when I say that, but I find working in a quiet house is very creepy and get much more done if the telly’s on in the background.

At one point today, Matthew Wright grabbed handfuls of his own moobs to demonstrate how big they were. Not pretty. I had to stop working for a full ten minutes and have some chocolate to get over the shock. But don't worry, that's not what I'm going to talk about here.

On the Wright Stuff, Matthew and guests discuss news stories. Topics today included a newspaper headline where an Oxford girls’ school is setting impossible tests to show 11-year-old pupils that it’s OK to fail. Read the story here (it’s the Daily Mail). It’s my personal feeling that this is bonkers and if my daughter went to this school I’d be asking for a refund of fees. But this is supposed to be a writing post not a ranty mama post, so I'm not going to talk about that story, either.

However, ‘failure as a key to success’, now that’s something I can relate to – particularly in terms of my writing. And I didn’t need anyone to teach me how to fail. I found out all by myself.

Only writers don’t call it failure – we call it rejection.

And rejection is part of writing. Or at least it is for most of us. I know there will be the odd superstar who will have sold everything they’ve ever written, but they will be exceptional. The rest of us will have had to deal with the dreaded R. Some of us on more than one occasion.

Success from failure is possible as many writer have found out, but it requires a few things. And I have prepared one of my beloved lists:

3. An ability to learn from mistakes: This can be a hard one and most of us need help with it. Which leads me neatly onto...

4. Luck: I’ve been very lucky – I have Minxes to rely on for feedback for novels. And I have short story writing friends for (surprisingly) short stories. I’ve also been extra lucky with editors – particularly the very lovely Shirley Blair at The People’s Friend, because not everyone finds an editor who is prepared to guide them through rewrites so that rejected stories are turned into something suitable for the magazine.

5. Finally, stubbornness: This is linked to tenacity. Do not give up. On a story or on yourself. Rewrite as though your life depends on it. My greatest day with short stories was seeing one published five years to the day after it had first been rejected by the same magazine. And with novels it has to be Trust In Me – this went through several rewrites to the extent that it was no longer the same story by the time I eventually sold it. The first version had a different title, a different hero, a different heroine and a different setting – and there weren’t even any donkeys.

Do you have any ideas for using failure as a key to success?

PS for British blog visitors: Brendan from Coach Trip is one of Matthew's guests tomorrow, but I won't get to see it because I'll be working in a proper office and my colleagues would frown on anyone watching TV. Really not happy. Someone watch it for me, please, and tell me if it's good? I love Brendan. 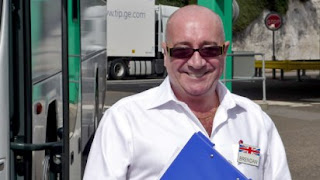 And, for those of you who don't know, this is Brendan, the host of Coach Trip, which is a reality TV version of the film Driving Aphrodite (aka My Life In Ruins) which I also love.
Posted by Suzanne Ross Jones at 6/24/2013 09:59:00 PM

So true, Suz. Doesn't make R's any easier at the time though!

No, Rs are always nasty.

I actually quite like that school idea - fear of failure can stop you trying new things, or trying hard enough, because then you have the excuse that 'I only failed because I didn't try'.

As far as writing goes, every time your work is rejected it at least shows you tried. So reward yourself for that, don't give up, and move on. (I recently had a story accepted that was written in 2004!)

The thinking behind the idea is sound - I know some grow up never having failed at anything and get a huge shock when they first stumble. But I think the actual test - where it gets harder depending on each girl's ability and goes beyond the reach of everyone - is maybe not the best way for the girls to learn about failing. (I could go on, but maybe in another post on my own blog :0) )

I like the idea of rewards for trying. And well done on that sale :0)

Hmm I thinking causing people to fail as a way of teaching them a valuable lesson in life...fails. Yes, it's important for all children to know what it's like to not always succeed but to set them up for failure is, in my opinion, cruel.

Strange how some schools do a sports event rather than traditional sports days because they don't want some children to be losers and some winners too.

My mum always used an old fashioned saying on me and it's probably one of the best: it's the taking part that counts.

And this is the same with regards to exams, sports days or writing. Sometimes you don't always succeed but the only way you definitely fail is if you don't take part.

(please remind me of this when I receive my next rejection!!)

Ooh, I love that movie 'My Life in Ruins'. I'm off to find Brendan on YouTube.

Rejections, however kindly given, always sting, but I've learnt from most of them. Hopefully they've also helped me improve my writing in some way.

Great post...setting a goal and going for it full force is what it takes...like they say in Hollywood stick around long enough and someone's gonna find you....it's the same with writing....keep submitting.

Lovely post, Suz. It's so easy to let rejections get you down, but you're right, never give up :-)

I think the impossible tests might work on some people, but could destroy the confidence of others.

Hey, I'm well on my way to success then, with the amount of rej. I get.

I agree with what you've said, Catherine. At my daughter's school pupils are encouraged to try widen their experiences and it stands to reason they won't all be the best at everything. I feel that teaches them about the reality of failure and how to cope with it in a much more useful way than an artificial test set up specifically to get them to fail.

I've watched that film so often I could get a staring role in it, Romy :0)

They do sting, Debs. But they are useful if we can learn something from them.

You MUST see Coach Trip, Teresa. The reality of being on a coach with a bunch of strangers would will me with dread, but watching it on TV is great fun. And Brendan is FAB :0)

Aw, Susan, hugs. And I feel your pain.

Well it all sounds a bit strange if you ask me!

Hello, Romance Reader :0) Thanks for dropping by.

I feel a bit cynical saying this, but I can't help thinking it's a gimmick to get the school's name in the papers.