Runaway Groom - Out now with a signed paperback giveaway! 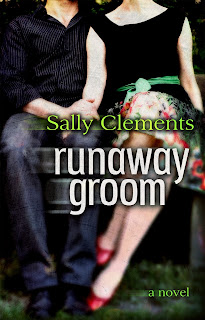 I'm exhausted this week, because last week was the release week of my eighth novel - if I add my book of short stories New Beginnings, and the Blaze anthology, I now have ten works with my name on them on Amazon...which makes me feel a little faint!

I love Runaway Groom, and so the reviews so far show that readers do too (relief!), so I thought I'd blog today about the kernel of an idea that grew into this book.

It started with a thought...
People want to sympathise with the bride in the event that a wedding is called off. There can be understanding and caring sent her way, and small town communities close ranks to protect her, even if she's the one who calls off the wedding.
Everyone loves to hate a runaway groom.

My hero, Matthew Logan is a runaway groom, and he's never been allowed to forget it. People ignore him in shops. Talk about him behind his back. It doesn't matter to him, because he's left the village of his youth, and doesn't have to deal with it everyday. But when someone who used to be his friend can't hide her animosity for his past, he's had enough... and the story begins!

You can read more of Runaway Groom by clicking the look inside tab on Amazon....
It's available from Amazon.com here, and Amazon.co.uk here.

Runaway Groom is also available in paperback from all the usual online places, and if anyone has a paperback of any of my books and would like it signed, just find me on twitter let me know, and I'll post you out a signed bookplate.

And because I'm a minx, I'm giving away a signed paperback to one commenter on this blog post who tells me why they think Matthew might deserve a second chance at love...

Your book sounds stunning! I think Matthew deserves a second chance because every one does. Maybe he ran away from something that wasn't right for him in the first place.

All the very best with RUNAWAY GROOM, Sally! You've got quite a body of work built up and how quickly you've done it!

And Kathleen, you've won my paperback giveaway... Can you contact me via the contact form and send me your address and I'll get it in the post to you?