I'm a sucker for a few things. Licorice all-sorts, chocolate, music while I write, and craft books on writing. I've decided to feature some of my favorites over the next few blog posts from me here on the Minxes blog. Years ago I did a fantastic online course on editing by Don McNair in which he laid out 21 ways to eliminate foggy writing and clean up your manuscript. At this stage, I hadn't been published, but the first manuscript I ran through his system ended up being the first book I sold, Catch Me A Catch.

I'm delighted to say that Don has now put all that information into a book, called Editor-Proof Your Writing, and it's available for kindle and also in print (I've got a paperback version). 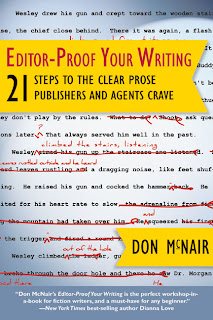 The thing I like best about this book is that you work on your own writing with it. Don encourages the reader to take the first chapter of your work in progress and apply each of his editing processes in turn to it. This means that instead of being a general 'book about editing', it is instead a powerful tool that you can apply to your words, your story, to strengthen it and strip away redundancies. Yes, it means 21 passes of the same material, but the insight into the way you write, the things you automatically do and shouldn't, is very powerful. Not everyone has the same weaknesses in writing, but using this book means that you quickly identify yours.

As an example here's one of my problems:

Use fewer -ing words.
She started walking toward the door.
Do we mean she got one foot into the air and stopped? No, you say? Well the author should have said this instead:
She walked toward the door.

The new sentence eliminates a word. One unit of fog. More importantly, it strengthens the action. She didn't just start something, she actually did it.

Another great section for me is a section about superflous verbiage (another one of my problems).
Here are a couple of examples, the second line is the improvement:

Personally, when I'm writing I just write. I get the words onto the page, and don't worry too much about my stylistic errors, or foggy writing. But after I've finished a manuscript, I go through it and clean it up. Don's notes help me with that, and I'm glad I now have them all in one place in a book!
Posted by Sally Clements at 4/22/2013 06:41:00 PM

Ooo,I love craft books. Thinking I need to add this one to my TBR.

I love to learn. I just got this on Kindle after your recommendation. :-)

It's now on my Kindle. Thanks for the recommendation.

Glad to have helped! I love craft books too :)