I know I'm not the only one who remembers Natalie Charles' winning entry in the last New Voices contest, and who's been eagerly awaiting getting my hands on a copy. It's here at last and the Minxes are exceptionally pleased to be able to bring you an inside glimpse into the heart-pumping action and romance of The Seven-Day Target. 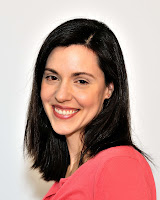 I'm a debut author for Harlequin Romantic Suspense and the winner of Mills & Boon's 2011 New Voices competition. When I'm not writing, I'm working as an attorney or a mom or a wife. Like so many women, I wear a lot of hats.

One and a half? When I won New Voices, I won the opportunity to have The Seven-Day Target published in the Mills & Boon Introduces anthology, which was released in October 2012 in the UK. When my manuscript was accepted for publication, Harlequin Romantic Suspense offered a contract to publish with the line in 2013. Because Harlequin Romantic Suspense was increasing its word limits for all books beginning in January, 2013, publication with the line meant I had to add 10 to 15k to my manuscript. Rather than adding scenes or chapters, I ended up rewriting the book almost entirely.

So, The Seven-Day Target is the same basic story line as the version I used when entering New Voices—same characters and same conflict—but almost completely re-imagined.

To be quite honest, I've struggled with this lately because I'm expecting a second child in June and the fatigue has been unbelievable. Going to bed early has become an even greater temptation than shoe shopping! But when I'm feeling more myself, it's all about discipline and goal setting. I try to set weekly word count goals, and once I accomplish them, I reward myself by doing something fun, like reading or watching a television show I enjoy.

At this stage I'm such a newbie that I've yet to figure out what works on a personal level. But I can tell you that what doesn't work for me as a reader is endless tweeting about a book. My eyes glaze over when I see anything on Twitter resembling an advertisement.

I choose my books based on reviews, and not just five star reviews, either. I've never been deterred from a reading a book that interested me based on a bad review. I guess my top promo tip would be to get your books into the hands of readers who will review them honestly.

Since I work full time and police a toddler in the evenings, I usually end the day with writing. It sometimes feels like these are the only hours I have to devote to something entirely of my choosing, so in that way, it's a very special time. That said, I wish the rest of my day could fit around my writing, instead. Alas.

6. Any craft books you recommend?

Stephen King's On Writing. I keep it in my nightstand drawer and I return to it when I need a kick in the pants. As readers, we never see the sweat and tears that go into producing a phenomenal book – all we see is the end product. Unfortunately that lack of perspective can trick us into believing that we can't achieve a phenomenal book on our own, or that writing well should come easily. King always reminds me that there's nothing more to writing than hard work, and lots of it.

7. In what way is being a published writer different to how you thought it would be?

I'm not sure why, but the biggest surprise to me was that writing as a published author feels an awful lot like a job. It's much different to sit down and write because you feel moved by the muse than it is to sit down and write because you have a contractual deadline. Then there are things like revisions and line edits, and just when you think you're ready to move on to something else, AA's show up in your inbox. I received AA's for The Seven-Day Target on the same day I had an emergency appendectomy. My editor was lovely and very understanding when I explained the situation, but it's just an example of how total control flies out the window once you're writing for a publisher.

Don't get me wrong – I still find many joyful moments when writing, and those moments are what keep me going. I knew that deadlines and other business realities would come with the territory, but it's eye-opening nonetheless.

8. At what point in your career did you actually start to feel like you were a writer?

It didn't happen when I got The Call, or even when I went through the many necessary steps to prepare The Seven-Day Target for publication. I really didn't even feel like a real writer when I held the anthology in my hands for the first time – knowing that my book would be on a shelf on a different continent felt much too abstract. I think I felt like a writer for the first time when I was invited to speak on a panel at a book conference. People were asking me questions about my writing process and looking for advice like I was an actual writer. That was surreal, and while I still feel like I may never achieve my fantasy Real Writer status, I definitely felt in that moment that maybe I was a writer, after all.

9. Writing snacks – what are your favourites?

Oh, chocolate, definitely. I also love to write with a big glass of red wine – not these days, for obvious reasons. If I'm writing earlier in the day, I also love coffee. Do coffee and wine count as snacks?

10. Do you have any tips, tricks or sacrificial rituals you do when you hit a story roadblock?

I'm a person who gets bogged down with details, and the more I focus on how to solve a problem, the more frustrated I can get. One of my best tips is to know when to walk away from a manuscript. Not forever, but for a few hours or a day or two. Take a walk, drive down a boring road, or take a shower. I find that my best ideas come to me during my morning commute, when I'm sitting in traffic and sort of on auto-pilot. I can be listening to a song on the radio and suddenly! I know what I need to do with my manuscript.

It's difficult to take those breaks. It feels lazy. But our creative mind is working its hardest when we daydream, so I'm a firm believer in taking smart, temporary breaks. For me, it's part of the process.

Thank you so much for hosting me today! 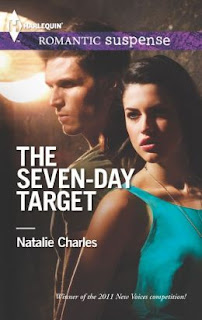 Love never dies, but can it kill?

He never meant to speak to her again. Back in Arbor Falls for a funeral, Special Agent Nick Foster has moved on. He has no plans to stay in his tiny hometown--or to reunite with the beautiful Libby Andrews. His onetime fiancée broke his heart, and what's past should stay buried.

Libby doesn't want his help. Her childhood sweetheart can never know the real reason she ended their engagement three years before. But when a serial killer targets her, she must team up with the rugged agent for her own safety. Something in her past has put her in danger, and the passion they've reignited puts their future in deadly jeopardy.

The Seven-Day Target is now available on Amazon, Barnes & Noble, and Book Depository. In the UK it's available as a special release with two other debuts from Amazon UK and Mills & Boon.

Thank you for having me here today, ladies! It's always a pleasure. :-)

Great to have you here, Natalie :0)

You work full-time, have a toddler and another baby on the way AND you write books... I'm in awe and not the least surprised you'd rather sleep than go shoe shopping.

Hi Natalie, great interview! What an exciting year ahead. I can't wait to read The Seven-Day Target :-)

Thanks for being on the blog Natalie, wishing you the best of luck (although i don't think you'll need it :-)

Congratulations on your debut, Natalie, and your pregnancy news! Thanks for going minxy for the day...

I loved your excerpt during New Voices and remember it well. What an interesting interview. I hope you feel better soon and no wonder you're tired with a full-time job, part-time job, and especially a toddler. But those days of babies and toddlers are real special and they pass so quickly.

A great interview from an even greater friend and writer! I already own my signed copy of this book, but I can't wait to see it on the shelves next week! I couldn't be happier for you:-)

@Victoria - Hello, my dear! Thank you so much for stopping by!

@Kathleen - Thank you! It's true that this special time flies much too quickly. I feel blessed to have to balance like this in the first place. :-)

Hi Natalie - ohh I remember your entry in NV and thought it was a fab winning story. SO glad it has been published. I shall go and download it onto my Kindle asap! Good luck with the writing and good luck with the forthcoming birth of you baby. Exciting times! Caroline x

Aw, thank you for the support, Caroline! I hope you enjoy it! xx

Congratulations on your upcoming relase of The Seven-Day Target, Natalie!

And I loved reading more about you here!

Thank you so much, Nas! xx

Hi Natalie! Congrats on the release and also on the new baby in waiting. I also look to Stephen King for a butt kick lol!

Thanks for the interview, Natalie and Minxes.

I can't imagine how anyone manages to write when they work full-time, have a toddler and are pregnant. Good luck with The Seven-Day Target, I look forward to reading it.