The Minxes are delighted to welcome Sue Moorcroft into our Spotlight today. Sue is published by UK-based publisher Choc Lit and is very supportive of aspiring writers both through her blog and her book Love Writing.

I write romantic novels of dauntless heroines and irresistible heroes, which are the kind of books I love to read, too. I also write short stories, serials, columns, articles, courses and writing ‘how to’. I’m a competition judge and a creative writing tutor. My book, Love & Freedom won the Best Romantic Read Award 2011 and I’m a Katie Fforde Bursary Award winner.

I’m English, born in Germany and have lived in Cyprus and Malta. I’m a Formula 1 bore, learn the piano slowly and love Zumba and yoga. And reading, obviously. Obviously.

This is amazingly difficult to answer. There are some things I’ve written that became books but began as serials, some that have been novels for all of their lives, one that has had different titles for the hardback and the paperback and one that’s non-fiction. Six novels and several other things, anyway.


3. Everyone who writes knows it's not easy - what methods do you use to keep at it on days when it would be so much easier to go shoe shopping?

I need to earn a living, so that’s quite motivating. I also have deadlines and there has to be a very good reason for me to miss one of those. I do like writing, which helps. If something’s going badly, I turn to something else. There’s always a column or something needs starting.


4. What is your top promo tip for other authors?

Be involved with social networking. Readers like writers, and Twitter and Facebook make contact easy. You can tell them when you have good reviews or if you have a new book out or whatever news comes your way. They can tell you if they like your books and I feel privileged when they do, which is happening every week. It’s a joy.

Readers recommend your books to their friends and followers, too. If you’re published in ebook form some ereaders have a facility to ‘share’ when your book’s been bought or read or reviewed.


5. How does writing fit into your day? Or does your day fit in around your writing?

As well as writing, my career includes things to do with writing – judging, tutoring or critiquing. Loosely, I do the latter three in the mornings and write in the afternoons. This allows me to keep on top of assignments/entries but also ‘keep my head in my book’, which is the most effective way of writing, for me. Promo and the business side of things are squashed in as and when. When I have a new book out (like now!) I do more promo than at other times. I work long hours.


6. Any craft books you recommend?


7. Keeping fit: Do you have an exercise regime to counterbalance all those hours sitting at a computer?

Yeah! I am a Zumba addict (yeah, yeah, wiggle wiggle clap clap). I’ve always loved to dance and my yoga instructor is also a Zumba instructor. I wanted a Zumba instructor in Love & Freedom so I went along to one of her classes – and nearly died, I was so unfit. Months later, when I was trying to lose weight, I gave it another go and I absolutely adored it. I do three classes a week, now, plus two of yoga, and I’ve lost about 10% of my body weight. And I’m waaaay fitter. As a crucial side benefit, I’ve made a circle of gym bunny friends to share a quick cuppa with after class and they’re good for my wellbeing.

Dancing is good for my emotional and mental health, as well as bodily health, to be honest. No matter how upset/worried I am when I go in, following a routine and dancing makes me feel better.


8. What was the most fun part of writing this book?

Oh, the research. I became such a research junkie. I’ve told everyone else about it so I might as well tell you. My hero, Dominic Christy, has a rare sleep disorder, narcolepsy. I got really into the subject but felt that my sources weren’t personal enough. So I posted on the message board of Narcolepsy UK that my character was called Dominic, was in his thirties and had narcolepsy. And I got a reply from a real Dominic in his thirties who has narcolepsy. He offered to help me, so long as I told it as it is – people with narcolepsy get tired of their disability being treated as a joke because it really isn’t funny at all – which was my intention, big time, anyway. And he’s been really great, telling me all the stuff about Dominic Christy that I didn’t yet know.

Also, I had to (yes, absolutely had to) have some reflexology treatments, a fish pedicure, learn to drive a 28-foot river cruiser and spend time in the air traffic control tower of Stansted airport. This book has been a blast.


9. Which of your characters would you like to be?


10. Do you write to music, or with the tv on in the background, or do you need complete silence?

Often, to music. It depends what I’m writing whether the music is rocking, lyrical or instrumental. I can’t listen to really good lyricists like Damien Rice, Newton Faulkner, Frank Turner or Regina Spektor when I’m writing, sometimes, because their words are so good that they distract me from mine. If I can ‘zone out’ from the music then I’m working well, which means I sometimes play the same album ten times. This sends other people in the house nuts. 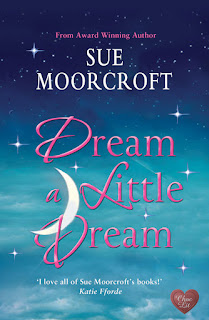 What would you give to make your dreams come true?

Liza Reece has a dream. Working as a reflexologist for a troubled holistic centre isn't enough. When the opportunity arises to take over the Centre she jumps at it. Problem is, she needs funds, and fast, as she's not the only one interested.

Dominic Christy has dreams of his own. Diagnosed as suffering from a rare sleep disorder, dumped by his live-in girlfriend and discharged from the job he adored as an Air Traffic Controller, he's single-minded in his aims. He has money, and plans for the Centre that don't include Liza and her team.

But dreams have a way of shifting and changing and Dominic's growing fascination with Liza threatens to reshape his. And then it's time to wake up to the truth ...


Dream a Little Dream is available from Amazon and Amazon UK.

Love & Freedom is availble from Amazon and Amazon UK.

Love Writing is available from Amazon and Amazon UK.

Oh I love the sound of your new book, Sue! And I'm so glad that you found your Dom (so to speak!) because it's the research that makes a book real and that sleep condition is something that I've often wondered about...
Thanks so much for going minxy for the day!

Hi Sue, thanks for being minxy with us!
What a terrific story about finding the real Dominic, the book sounds right up my street.:O)
I always admire choc lit, they seem like a lovely team and they have some to die for covers!
Best of luck,
Jodie

Thank you to the Minxes for hosting me. Sorry not to have been by earlier but publication week seemed to involve a lot of celebrating ...

Sally, thank you, too!

Thanks so much for hosting me! Sorry not to come by earlier but publication week seemed to involve a lot of meals out and other celebrations. :-)

Love Writing is a fabulous book. And I so agree with that Sue is incredibly supportive of aspiring writers.