This isn't Rachel's first Author Spotlight for the Minxes, but she's answering different questions! We're delighted to have her here today, to tell us all about her latest release for Entangled's Indulgence line (and answer the questions of course!).


Tell our readers a little bit about yourself.
I’ve been a full-time writer since my first book ‘sold’ a couple of years ago, well as full-time as I can be with two school age children! I have a law degree and am a fully qualified accountant. I’ve had day jobs in the space industry, pharmaceuticals, insurance, a supermarket, a bus station, a railway depot, and a lingerie department.
I live with my daughter, son and The Exec in Fareham, Hampshire, on the south coast of England and can sometimes smell the sea from my back garden. Hobbies have sort of gone out of the window right now as I’m so busy, but I do love a solitary visit to a hushed and dusty old antiques shop when I get the chance. Apart from that, wine and expensive lipstick keeps me happy.

What number book is this? First? 100th? 200th?(Nora only!)
The Spanish Billionaire’s Hired Bride is my third published novel.

Everyone who writes knows it's not easy - what methods do you use to keep at it on days when it would be so much easier to go shoe shopping?
Sheer terror is about the only thing that will force me to write if I really don’t want to – something like a screaming deadline will do the trick!  Fortunately, not wanting to write doesn’t happen very often and it’s probably a sign that I should have a break anyway. Not having a nine- to- five job gives me flexibility, but it also means I find it very hard to stop. So shoe shopping now and then really is a kind of therapy.


What is your top promo tip for other authors?
It’s hard, but try your best not to do the equivalent of saying ‘buy my book’. Think longer term and interact with as many people as you can in real life and on social networks, and that means anybody because you never know who’ll be interested in you and your book. If people like you, there’s a good chance they’ll consider buying your work. Here’s an exclusive revelation for the Minxes: I once unknowingly sold a book to our local Police chief in the school playground – I had no idea that was his job! He said he enjoyed it …

How does writing fit into your day? Or does your day fit in around your writing?
As I mentioned above, I have school age children, so I have to fit my writing around that routine, but I try to be disciplined as it’s my ‘day job’ now. After the school run, at nine o’clock the laptop goes on, maybe an hour for lunch and jobettes during the day, and then by three o’clock I fetch the children.  So, I have about six hours maximum alone and then throughout the evening I’ll do housework, scribble in notebooks, deal with US emails and maybe get some Facebook or Twitter in. I do wish I had more hours in the day …


Do you write every day?
Pretty much, even if it’s just a scribble on a notepad while I’m tethered to the kitchen sink! I can’t help it …


Is there a book you haven't written yet that you're dying to? What genre?
There is. It’s one third written and breaks a lot of genre rules, which means it will probably never see the light of day, but it feels so right. It’s a romcom, bonkbuster, with dark parochial prejudice and a little mystery thrown in.  Think Bridget Jones, meets A Casual Vacancy, meets Fifty Sheds. So if any adventurous London-based agents are reading …

Any craft books you recommend?
·      Goal Motivation and Conflict: The Building Blocks of Good Fiction by Debra Dixon.
·        Got High Concept: The Key to Dynamic Fiction that Sells! By Lori Wilde.
·        Writer's Journey: Mythic Structure for Writers by Christopher Vogler.
·        On Writing Romance: How to Craft a Novel That Sells by Leigh Michaels.


Which of your characters would you like to be?
I’d quite like to be any of my heroines. Even though they have things tough in the beginning – they go to places I’ve never been, experience the ultimate in luxury and always get their super-hot man in the end. I’d be quite happy to live in their fantasy world – one without two baskets of dirty laundry a day!

Writing snacks – what are your favourites?
Oh dear, it’s not vegetable crudités and hummus that often.  Cough. If it’s bad for you, it’s probably in my top ten. My son keeps making me buy those new Walkers deep ridged potato chips, so it’s not really my fault … But I do like very posh olives!  Is red wine a snack? 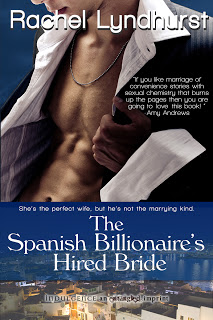 He bought her with cold, hard cash, but can she stop him from stealing her heart?Blackmailed to marry against his will, Ricardo Almanza needs a wife before he’s thirty, and time is running out. A notorious playboy, marriage is the last thing he wants, but his stepmother’s sexy, debt-ridden personal assistant is the perfect solution. He makes her a business deal she can’t refuse—one million euros for three months as his wife. He might even enjoy being married to her … if she doesn’t kick the crap out of him again.
Helen Marshall can’t believe she’s considering Almanza’s outrageous proposal, but she must help clear her parents’ debts or they face financial ruin. The small print on the marriage contract changes to read three months as his wife in every way—including in the bedroom. Has she gotten in too deep, or will she need a new contract addendum, extending their marriage forever?

The Spanish Billionaire's Hired Bride is available now from Amazon.com, Amazon.co.uk and Barnes and Noble.
And you can find out more about Rachel and her books at her blog, facebook, goodreads and she's @RachelLyndhurst on twitter.
Posted by Sally Clements at 11/01/2012 09:47:00 AM

Thanks for having me, lovely Minxes!

Lovely of you to say so and comment, Caroline! :0)

I think Marriage of Convenience one of my very fave tropes so will look forward to reading this :-)

Catherine, you are my kind of woman!x

Thanks for being Minxy with us today, Rachel. And he's more than just a little lickable.