I'd like to welcome a guest blogger and fabulous editor to the Minxes today. Don McNair runs excellent courses on editing, and the distillation of this wisdom is coming out in book form next April. He is also a romance author, so there's a little about two of his novels as well.

Your online “21 Steps to Fog-Free Writing” class helped me tremendously in writing and publishing my six novels. How did you develop the program?
The idea for it came several years ago on a flight from Chicago to Atlanta, where I was to research an article for a public relations client.  Out of boredom I was editing a fog-filled paperback—yes, editing is actually a game for me—when I realized the same mistakes appeared over and over.  I was intrigued.  I bought another paperback at the Atlanta airport and edited it on the way home.  A pattern emerged, and I became excited.  Had I discovered the writer’s Rosetta stone?
Over the next several months I edited many other paperback novels.  I joined critique groups and aggressively edited other writers’ fiction.  I plowed through all those manuscripts from pre-published authors and the marked-up paperback books I'd tossed into a dresser drawer, and painstakingly sorted thousands of offending sentences and other problems by type.  I eventually identified twenty-one distinct problems.  Today I call their solutions, appropriately enough, the 21 Steps to Fog-Free Writing.
The inference staggered me.  Just as there are a specific number of elements in chemistry’s Periodic Table and letters in the alphabet, there’s also a specific number of fog problems in writing.  I realized many unnecessary words are actually tips of bad-writing icebergs, and that eliminating them resolves otherwise complicated editing problems.  In fact, almost half the Steps actually strengthen action while shortening sentences.


Do you teach other writing classes?
Yes.  It occurred to me that the “21-Step” course helps writers take words out of their WIP, but what’s the best way to put them in in the first place? So I developed a companion course titled “Editor-Proof That Manuscript!” that helps writers do that. It covers such areas as hooks, point of view, information dumps, developing scenes, conflict, sexual tension, and much more.


I understand you’ve written a book on self-editing. Can you tell us about it?
Sure. I realized my two classes provided a complete package, telling writers how to put words in and take them out.  So I combined them into a book titled “Editor-Proof Your Writing: 21 Steps to the Clear Prose Agents and Publishers Crave.” Quill Driver Books will publish it April 1 of next year.

What’s your writing background?
I’ve written my entire career, starting after college in the early sixties.  I edited magazines for eleven years, wrote and managed other writers for a major PR firm for six years, then ran my own marketing communications business for twenty-one years. While I was successful in what I did, I yearned to write fiction, a different animal entirely. I “went to school” since then,  combining trial-and-error with writing classes and reading.  Since then I’ve written three romance novels, two young adult novels, and a book of short stories.

Can you tell us about your romance novels?
Well, I’ve often heard one should write about what he/she knows about, so I based two of the romance novels on my own experiences. It’s a great way to do research. 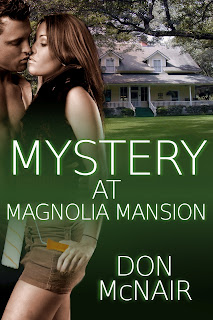 The first, Mystery at Magnolia Mansion, evolved from owning a crumbling historical house my wife and I found in Magnolia Springs, Alabama. As we renovated it, it occurred to me it would be an ideal location and topic for a romance novel.  So I developed a story about a young interior designer who… well, here’s the story:

Brenda Maxwell’s new interior design client tells her to “paint, wallpaper, whatever” his hundred-year-old landmark mansion (the house we owned), “but for God’s sake, don’t go overboard.” When she figures her grandiose plans will fit handily into his edict’s “whatever” section, they’re launched into a constant head-bumping mode.  Brenda’s poor money management skills (that’s his view, but what does he know?) and lawyer David Hasbrough’s ridiculous need to control her life (that’s her well-reasoned evaluation of the situation) combine to keep the battle going. Is this couple’s romantic goose cooked? Well, she can’t be near him without sparks flying and goose bumps popping out everywhere.  But that mansion has to be done right! 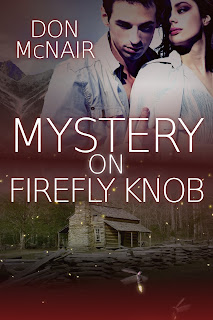 The other romance novel is titled Mystery on Firefly Knob.  It was born on a trip through Eastern Tennessee, when my wife and I ran across a Cumberland Plateau knob overlooking beautiful Sequatchie Valley. It looked like an ideal place to launch a story, but about what?  As I considered that, I read of a unique firefly that flashed simultaneously with others instead of individually. I also remembered my own hobby dealing in mail-order antiques in Glen Ellyn, Illinois. I threw in a murder, intrigue, love, and action, and came up with this story:
When Erica Phillips visits choice inherited property on a Cumberland Plateau knob overlooking a beautiful valley, she finds scientist Mike Callahan camped there to study unique fireflies. She needs to sell it fast to buy a new building for her antiques business in Glen Ellyn, Illinois, but he freaks out when a condo builder offers her a contract. Miffed, she tells him, “If I have my way, this place will be sold within the week. And, Mr. Callahan, I will have my way!” Their budding romance plays out before a background of a murder mystery, distrust, and heart-racing hormones. Will it blossom into a lifetime relationship?


When did you first consider yourself a writer?
I guess the very first time was when I was in grade school, and the teacher asked us to write a story about Mother’s Day.  The next day she read mine to the class, and later a pretty little girl came up to me and said, “Donnie, I loved your story.”  That’s when I realized I loved writing, and feared little girls.


Do you write full-time? If so, what's your work day like?  If not, what do you do other than write and how do you find time to write?
I spent most of my forty-year career writing stories that told how my client’s equipment or services helped other manufacturers solve problems—less expense, faster production, better service—then placed the stories with magazines read by my client’s potential customers. I also oversaw writing staffs, and learned early that even “professional” writers needed editing.  Today I put that knowledge to work for editing fiction writers at http://McNairEdits.com . I generally edit in the mornings, and write my WIP and do promotion in the afternoon.


Anything additional you want to share with the readers?
Just this. If you want to be a selling fiction writer, keep learning. Take evening and online writing classes. Write every day.  And above all, after your critique partners have signed off on your work and you’ve polished it as much as you can, have it professionally edited before sending it to a publisher or agent. I work through an editing network, and see hundreds of raw manuscripts. Most need heavy editing. What I see is what those experienced publication editors and agents see, so I know why they reject ninety-five percent of the manuscripts offered.

Remember: the manuscripts I see are written by writers who realize their work might not be the best it could be, and have asked for help.  The rest send their work directly to agents and publishers, and most will get them back with a nice note thanking them for their interest.  They won’t know what mistakes they’re making—or even that they’re making mistakes, for that matter— and for the rest of their lives they will make the same ones.  They will produce manuscript after manuscript that will find their way back to them.  A professional editor can tell you what you’re doing wrong and short-circuit the process. At the very least, I hope your readers read and apply Editor-Proof Your Writing when it comes out!

My favourite page on Don's website is the one which shows before and after editing - have a look... http://mcnairedits.com/EditingSample.html

Thanks for going minxy for the day, Don!

And Mystery on Firefly Knob is available from Amazon uk here.
And Amazon com here.

Hi Don,
Thanks for being with us here today, what a fascinating interview!
I love the sound of your book about the crumbling mansion, I'm going to add it to my christmas book wish list. :O)

Thanks for the kind words, Jody. Hope you enjoy the book!