I am absolutely thrilled to have fellow South African Joss Wood in the spotlight today. Not only is Joss' debut novel a re-launch title for Riva (my favourite M&B line) but she's also the first South African to sell to Harlequin / Mills & Boon in the 21st century. You go girl!


What is your writing process?

Even while I’m working on a MS, I always have ideas bubbling away in the background. As an idea comes to me for a new book− or a heroine/hero with a problem− I jot them down and carry on writing. When I’m waiting for revisions to come back from my editor, I go through those ideas again to see if any of the premises/ ideas jump up and shout ‘write me, write me!’ If they do, I start fleshing the story out, if not I pace the floor, eat cookies and worry whether I’ll ever write another book again.


Everyone who writes knows it's not easy - what methods do you use to keep at it on days when it would be so much easier to go shoe shopping?

If I’m not pulled back into the story by the previous chapter then I grit my teeth and write anyway. And then I write some more. The first couple of pages are usually absolute rubbish but I start getting into the flow and my right brain takes over. I’m an absolute believer in right brain and left brain writing and when I allow my right brain to be in control, then writing is that much easier. And better.


Keeping fit: Do you have an exercise regime to counterbalance all those hours sitting at a computer?

Does running after my kids count? Nope…didn’t think so. I know that I have to find the time to exercise but with a pressure filled but flexible job and two kids with crazy and varied school, social and sporting lives, exercise falls way down the list. I know, I know….that answer sounds wet, even to me…


Do you believe in writer's block?

I don’t actually. Maybe it’s more accurate to say that I can’t allow myself to believe in writer’s block because I have such limited time to write. The time I set aside to write has to produce black letters on a white screen…

I mentioned right brained writing earlier and I went on a course to learn how to easily slide into right brained writing and that’s what I do now. Since learning those techniques I really haven’t struggled with writer’s block because I just fall into the story and let my subconscious take over.


Have you ever used an incident from real life in a book? If so, did it get you into trouble?

In my book She’s So Over Him, the scene where Maddie gets stuck in her own bathroom is based, very loosely, on something a friend’s daughter experienced. At the moment I get into trouble because my friends tell me there is not enough of them in my books! Oh, and the scene in She’s So Over Him, when Maddie puts red food colouring into the pool and turns the pool− and Cale’s dog− pink? That’s courtesy of my very good friend Tracey, who routinely tosses food colouring into her pool and turns her Golden Labrador (who loves water) pink or green or blue.


In what way is being a published writer different to how you thought it would be?

Getting published is such a thrill; surreal and fun and such a kick in the head. (In a nice way!) When that all died down, I admit that I went through a spell about two months ago when I felt quite overwhelmed by it all. Nikki Logan, a Riva author, put it in perspective for me. She said that before you are published writing, for most people, is an escape and once you become published, some of that is taken away and it becomes a business. Time that you would’ve spent writing is now taken up by Facebook and Twitter and because I’m neurotic *grin*, I’m always second guessing myself. Just recently, I’ve made a conscious decision to trust the process, to trust myself and to enjoy the ride.


Promotion is no longer a dirty word. In what ways do you strive to reach more readers?

I’m on Facebook and Twitter and have a Blogspot. I’m in the process of establishing a website and I am grateful for any opportunity to feature on anyone else’s blog. So, thanks, Minxes!


What is your top promo tip for other authors?

Not so much a promo tip but I found that by meeting other authors and joining Writers Loops, I have learnt so much about what and what not to do. The wonderful authors from Harlequin and Mills and Boon have been so incredibly helpful.


What did you learn while writing this book?

She’s So Over Him being my first book, I learnt that the character’s motivation has to be water tight and consistent and deep enough to be believable, that dialogue is incredibly important and that romance is incredibly hard to write.


What was the most fun part of writing this book?

I just fell utterly in love with the characters and felt bereft when they went off to enjoy their happily ever after. I just enjoyed them….their hang ups, their chemistry, they way they had to be dragged, especially Cale, to his happy ever after!


And just for fun: what would your hero’s honeymoon destination of choice be?

Cale’s honeymoon destination….? Mmm, that’s a hard one. I suspect that it’ll be a bit off the wall, like sailing a catamaran up the coast or hiring an isolated cottage in the mountains. But definitely away from any shops so that Maddie can’t indulge in her insane shopping habit! 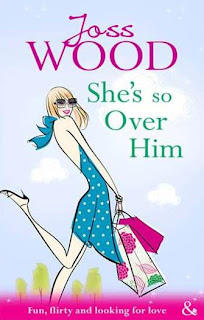 What not to do with your ex…

Maddie Shaw has spent the last ten years not thinking about her fast-and-furious fling with Cale Grant. His dark blue eyes, his hot chocolate voice, his magic touch… No, she doesn’t remember anything like that. Only the numbing devastation when he let her down and she walked away.

Now Cale’s sauntered back into Maddie’s life – drinking in the same bars, working on the same projects, and setting off the same fireworks inside her. It’s Maddie’s chance to prove just how over her ex she really is…but one steamy kiss later she’s fallen at the first hurdle…!

She's so Over Him is currently available here from Mills & Boon, and will be available from 1st October on Amazon and Amazon UK.

Thanks so much for being a Minx today, Joss! I've just had a browse of your book on the M&B site and I absolutely adore your voice! Can't wait to read this one :)

I love the blurb of your book, can't wait to read it too...

Can't wait to read this, Joss, sounds fab and loving the Riva covers

Wow, Joss! Didn't know you were the first South African Mills and Boon author of the 21st century! I loved reading about your writing process. Maybe you need to write a blog post about right-brain writing as I'm sure others could use some tips to overcome writer's block. Looking forward to reading your book - it certainly sounds humorous and fun.

I've asked you this on your blog and I'm asking you here too - is there any chance of your book coming out in India? My friend and fellow reviewer Desere loved your book and I'm dying to get my hands on a copy!

Joss that's a really cool idea to write down those ideas that come to you when you're writing one book and look them over when you've finished. I always seem to write them down, then forget to re-read them, and I do the 'help, I have no ideas' tango..
Thanks for reminding me to look in the notebook, not just write in it!

Huge congrats on the book, it looks and sounds fab.
What an accolade to be the first SA author for M&B this century, great stuff. It sounds as if you have had an exciting few months, enjoy your launch.