Today, for the first time ever, we have a South African author in our spotlight. April Vine lives among the Winelands in the Cape and writes hot, hot, hot stories!


April, what is your writing process?
Hmmm...wish I had one. I’m all over the place from writing thousands of words in one day to skipping three to four days in a row. But I am learning to right that disorderly flaw by writing consistently. So far all I’m consistent in is still being inconsistent!


Everyone who writes knows it's not easy - what methods do you use to keep at it on days when it would be so much easier to go shoe shopping?
The only method that keeps me at it is a deadline looming over me, other than that, I go shoe shopping  But sometimes it’s just a case of putting one word in front of another.


Keeping fit: Do you have an exercise regime to counterbalance all those hours sitting at a computer?
I’m a huge sugar fan and yes even forty minutes on the treadmill four days a week isn’t enough to deter me from eating sugar in the least. Recently though I found myself exercising more for mental fitness rather than physical and I’m only twenty years old, so I don’t know what’s up with that ;)


Do you believe in writer's block?
I do believe that writers get blocked for some reason or another. My personal writer’s block is more similar to a self-sabotage effort than in not knowing what to write. Usually when I’m whizzing through writing a book, I’m suddenly struck with a dire need to polish the spoons.


In what way is being a published writer different to how you thought it would be?
Oh, it’s so different! For one, it’s given my internal editor a new surge of life which in turn has downplayed my word count considerably from when I was unpublished. I thought it would get easier. It doesn’t. It gets harder.


Promotion is no longer a dirty word. In what ways do you strive to reach more readers?
It isn’t?  I usually do a few interviews when I have a new release, but that’s about it. I do have twitter and facebook as well but I’m not there always.


What is your top promo tip for other authors?
Promotion, any form of promotion scares me. I have to physical remind myself to be more cyberly social on a daily basis, but in that I’m inconsistent as well. I think if you write good books, readers will find you so it pays to better your craft with every book you put out there. For me writing is a never-ending learning journey.


What was the most fun part of writing this book?
The end! I know my hero and heroine got their happily ever after, after all so my job is done.


And just for fun: what would your hero’s honeymoon destination of choice be?
Oh, I think Sebastian would take her to the Swiss Alps in all luxury of course and he’ll make it his mission to keep her warm all the time ;) 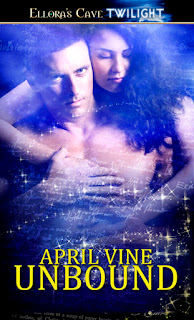 Staid and straitlaced Michelle Stein has two thoughts fueling her mind…
1. Floor the first man to walk into her antique shop.
2. Throttle her three witch-practicing aunts.

They promised her a tiny spell to fix her ridiculous inhibitions, but instead mischievously delivered a full-blown, sanity-squashing lust spell. The temporary curse apparently has no boundaries either…since the first man who walks through her door is the same man who broke her heart ten years ago. Despite Michelle’s vociferous resistance, Sebastian becomes the only man who can appease her unending physical hunger.

Great interview!
I'm so excited for you, April. :)

Thanks so much for having me, Minxes of Romance!

Thanks for coming by!