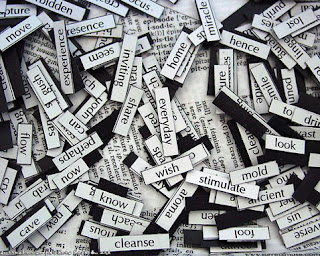 Imagine you opened your mouth to speak, or began to type and the exact opposite of what you intended came out without you even noticing, or a random word that made no sense, or that familiar words simply vanished into thin air.

Then maybe you'll get an inkling of how it feels when a writer falls out with words in a permanent way. Those of you who know me know I am a quieter Minx because I have a brain injury. I want to blog more, to read your blogs and chat on Twitter, to catch up on your news on Facebook...but words just don't play nice anymore! Three years on from the accident I'm more likely to laugh at my mistakes than get frustrated - I recently told someone to flash a shop assistant (I meant to say 'flutter your lashes'), asked a friend to fetch a screwdriver from the car (I meant coat) and the lovely Sally Minx is nicknamed Salty Minx after I misnamed her in a Skype chat.

So it's become less of a deal - those around me know to question when I say something odd. The gap between my brain thinking and my body carrying out it's intention doesn't usually matter too much.

Until I come to write that is.

Words that were my friends when I was growing up, my nose buried in one book or another, now misbehave, float away out of reach or reassemble themselves jumbled up on the page. Reading can feel like running through treacle and a short email take ages to write, and check, and check again... 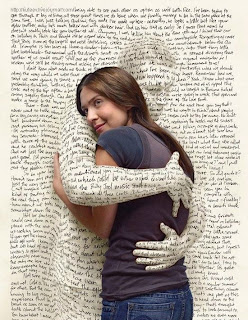 But recently I've discovered that the creative process, by which I mean that urge, the drive that takes over and apparently gives our characters lives of their own, is on a different wavelength to the conscious cognitive cogs grinding slowly away.
On holiday last week a creative well, an explosion of character actions and reactions, dialogue and narrative all came tumbling out, seemingly bypassing conscious thought. I had to write by hand so some of what I wrote is illegible or jumbled but the story on the whole is there.

I've experienced 'the well' before my injury and I'm sure a lot of you know what I'm talking about, that tumbling of words so fast you can hardly keep up with yourself? What makes me happy is the discovery that my creative instinct is intact. After being forced to read so many depressing medical reports (including one which stated that I would "never write a novel now") I think fear of the difficulty and bewilderment about words no longer feeling under my control has held me back.

Writing on holiday helped me remember how much I love it, how it satisfies me in a way nothing else can and that I have to write regardless of who may or may not have given up on me.
I will find a way to make it work, to call a truce...

And most importantly I know my fellow Minxes will help me catch the weird stuff before it gets to the desk of an editor!

I think you're brave and inspiring, Lorraine.
Anyone who read your NV entry last year will know that your injury hasn't taken away any of your sparkling voice as a story teller, but your post has made me understand even more how hard you have to work to get your stories down.
So happy the holiday restored you a little, maybe that's the answer. Keep going on holiday! lol!

What a beautiful and inspiring post! Thanks for sharing and showing how humor and strength in any situation is the best way to live one's life. May the words be with you!

Lorraine,
That's wonderful! The brain is very mysterious and I think capable of more than we know. My son is autistic and at 3-years-old he barely talks except to say the word "more" and he does sign a bit. But then out of the blue, little words and phrases will pop out of his mouth - "no", "hey, Dad" "yeah" "Babe" (his favorite movie), "mi" (for milk). Not consistently, but enough to give us a lot of hope.
Enjoy the well!

Jo P took the words right out of my mouth. Whoever said you'll never write a novel now should read your NV chapter from last year. Just 10-12 more of those and you'd not have a book, you'd have a fantastic book!

And as Jennifer said, may the words be with you.

Thank you for your lovely comments.
Have to say I love Jo P's idea about being on holiday more often ;-)

Lorraine, I don't know you but, I know exactly how you feel. The twisted words and phrases, gaps in speech and thought, endless embarassing type-o's, slow progress and frustration with writing...yep, I hear ya. It's a headache (literally at times)to get those words out. It's taken me two years to get back my confidence, to know it's okay that I mix things up and the writing is slower than it was before, and slower than I ever wanted it to be. Because in the end, the important thing is, despite the doubts and odds, I'm still writing. And I'm so happy to hear that you have fought your way your way back to writing too. The creative spark is still there. Awesome!!! Embrace it and let it flow. The words WILL find a way.

Can't you live on holiday??? Buy a motorhome and spend your life in a different place every week? *sigh* wouldn't that be fabulous!

And I agree with the others, anyone who read your NV chapter knows how wonderful your voice is. Now get yourself back on holiday and write some more so I can read!!