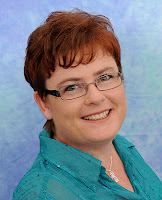 Today we welcome into the spotlight Australian author Kylie Griffin. You can find out more about Kylie and her books (yes plural, as Vengeance Born, which she's chatting about with us today, is just the first of three) at her website: www.kyliegriffin.com

Thank you so much for inviting me to your blog – I’ve been looking forward to the visit!


• What is your writing process?
I’m a panster when I begin a book. I don’t sit down and plan or write synopsis before putting fingers to the keyboard. I usually know the opening scene and where I want the book to finish but everything else in between is very fuzzy.
That doesn’t mean to say I haven’t thought about the characters and played a few games of “what if…” to get an idea of what sort of story might develop, I just don’t have a clear idea of how the story arcs are going to work until I get into it.
Once I start writing and I get past about 25K I know where it’s headed. I’m a scener after that. I can see scenes, have no idea where they’re going to slot in but as I “get to them” I know when or where they fit (if that makes sense). And that’s how I get through the first draft.


• Everyone who writes knows it's not easy - what methods do you use to keep at it on days when it would be so much easier to go shoe shopping?
I put up my “DO NOT DISTURB” sign that says “Turn around, walk away quietly and no one will get hurt" put on the answering machine, unplug the internet, light up some incense and implement BISFOK – bum in seat, fingers on keyboard – until I lose the urge to be distracted or do something other than writing.
It boils down to sheer bloody mindedness and habit.


• Keeping fit: Do you have an exercise regime to counterbalance all those hours sitting at a computer?
I join a local walking group twice a week and I attend a TaiChi class once a week. I also potter in the garden – flower/vegie gardens and mowing lawns. Most of my exercise has to have a purpose – can’t see the attraction of a gym.


• Do you believe in writer's block?
I think there are times authors find it difficult to write but if you persevere, even if it’s to write rubbish, then you can get back into the swing of it. Rubbish can ALWAYS be edited, a blank page not at all.


• Have you ever used an incident from real life in a book? If so, did it get you into trouble?
I’ve modelled some characters on people from real life, particularly the child characters.
For example, one of the characters in VENGEANCE BORN is Rissa, a young child, one of the first humans Annika (the heroine) meets.

Being a teacher in a primary school I’ve had many examples to draw on!  Although rather than model a character on one child, I’ve combined personality traits from several students.I’ve a friend who recognised a name very similar to her child in the book – the character was partly based on him but she wasn’t upset – she quite liked the idea he was in the book.


• In what way is being a published writer different to how you thought it would be?
There are manic times and lulls in the publishing process. I’d been warned about them and while everyone says you now have deadlines, the process of training yourself to write regularly, consistently, rather than on a timetable that suits you, that’s been the hardest part of the transition.
It doesn’t matter what’s happening in your “other” life – work, family etc. – where before you could put off writing if you wanted to, now you can’t afford to let too many days slip by without writing.


• Promotion is no longer a dirty word. In what ways do you strive to reach more readers?
Ahh, the temptation and bane of every writer.
I believe that the best promotion is writing a good book. That’s the only thing you can control as far as generating promotion. The spins off from that is word of mouth. Write a good book and readers will spruke about it to their friends and so on.
I’ve started a blog (www.kyliegriffinromance.blogspot.com) where I have a mix of guest authors visiting, posts on the craft of writing or the publishing process, but I enjoy doing that, so it’s not really a chore.
I love going to writers’ conferences and hope to extend that to readers’ conferences once my books come out. The common link of writing/reading good books is something I enjoy discussing – nothing beats talking about writing or recommending a good read to another person who loves books as much as you.
I’m also addicted to Facebook. While I’m on GoodReads, Twitter and Shelfari, I don’t frequent these sites as much.
I try to limit the time I spend on social networking – writing the book has to take top priority.


• What is your top promo tip for other authors?
Keep writing good books – it’s as simple as that.


• What did you learn while writing this book?
That’s a good question. I guess my answer focuses more on the process of working with my editor. While I’ve had writing friends and critique partners make suggestions on where to improve the story, if you don’t agree with them, you don’t have to take them on board.
But working with my editor, I viewed her feedback in a different light (and I think that’s because I’m more accountable to her, LOL!). She helped me realise you can always improve and strengthen your story.
It didn’t mean I said yes to every suggestion or change she made, but we did talk and brainstorm ideas and when something gelled I understood that the new idea was often stronger than the original and so, then I made the change or rewrote the scene knowing the book would be all the better for it.


• What was the most fun part of writing this book?
Definitely the romance between Annika and Kalan. It was fun trying to work out how they were going to overcome prejudice, mistrust and each others preconceptions about their respective races.
A favorite scene of mine is one of the first times Kalan threatens to kill Annika. Their fragile alliance is threatened by her being Na’Chi (half human, half demon).
As a Light Blade warrior, Kalan has seen the Na’Reish raid human territory for blood-slaves. Annika doesn’t trust him but has no choice but to share information about herself with him.

The revelation that she drinks blood, just like his Na’Reish enemies, endangers the thin thread of trust they’ve established during their escape from her father’s fortress. It seems an insurmountable hurdle but it was a hoot devising a way for them to overcome that problem and strengthen their confidence in one another.


• And just for fun: what would your hero’s honeymoon destination of choice be?
Kalan’s partial to a long soak in hot water. There’s a scene in the book where you get to see him indulging, so I guess a destination with natural hot springs or a spa.  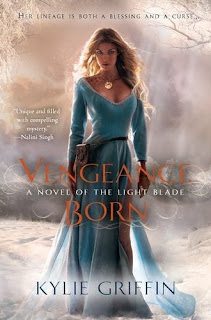 VENGEANCE BORN
There is no mercy in the demon realm. No escape. In this place of desperation and conflict, anyone who is not pure bred is virtually powerless. Until an unlikely champion is born…

Annika, half-blood daughter of the Na’Reish King, longs for more than her tormented life among her father’s people. Conceived in hatred and bred as a tool of retribution, she’s gifted with a special talent that can heal as well as destroy.

With the Na’Reish vastly outnumbering them, Kalan, a Light Blade warrior, knows the future of humankind depends on him alone. Incursions into human territory and raids for blood-slaves by the Na’Reish Horde have increased. As Chosen-leader, he faces the task of stopping the demons—and convincing the Council of aging Light Blade warriors that change is necessary for survival.

When Annika learns Kalan is a prisoner in her father’s dungeon, her dream of escape seems within reach. She agrees to free him in exchange for his protection once they reach human territory. Now, marked for death for helping him, Annika must learn to trust Kalan as they face not only the perilous journey to the border but enemies within the Council—and discover a shocking truth that could throw the human race into civil war…


Vengeance Born is published by Berkely Sensation, and is available through Amazon, Barnes & Noble, BookDepo, and Penguin Australia.

Hi Kylie, love your cover! Thanks for popping in to tell us all about your book, and going minxy for the day!

Golly, yes, that's a wonderful cover and the book sound really good too!

LOL at 'BISFOK – bum in seat, fingers on keyboard'
Cant say I've heard that one before!

Well it definitely paid off because you've written a really great book Kylie :)

Hi Sally & Rachel, thanks for the compliments on the cover – kudos really should go to Gene Mollica for his wonderful conceptualisation of VENGEANCE BORN. He pinned Annika to a T with the model he chose.

Lots of people have asked about how he made the over, if you're interested there's an interview I did with him on my blog – http://bit.ly/yYEOWQ - the process was fascinating!

Cath, great to see you here and thank you for reading VB! There's great satisfaction in knowing someone enjoyed what you wrote.

Not heard of BISFOK? Wow! I thought that was a popular term. :-)

Soaking in a hot spring sounds divine right about now, I think I am a big fan of Kalan!
I don't know how you do it, come up with a story that isnt just all over the place and makes no sense. Because that is what would happen if I tried. Thanks for the peek into what it takes to put together a great book!

Hello Lexi! :-) That hot spring scene was inspired by Rotorua in New Zealand. It's a city built in the crater of a dormant volcano, so there are lots of hot springs, mud pools and other geo-thermal activity happening in the area.

I love that you're a fan of Kalan - thank you! And it's my pleasure sharing my insights to creating a book. Thank you for reading them!

Hey Pauline! :-) I've loved doing this blog tour and the interviews. There have been so many great questions asked and I've enjoyed answering them all.