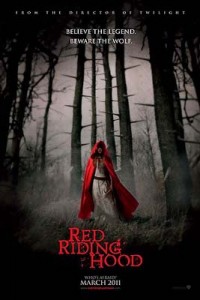 For weeks I drove passed an eye-catching billboard and thought "I have to see that movie!" Luckily it came out on DVD fairly quickly, and this weekend I got to enjoy director Catherine Hardwicke's take on this classic fairy tale.

For those who don't follow these things, Catherine Hardwicke directed Twilight (the first movie in the series). Since she worked as a production designer before becoming a director, it's no surprise that this latest movie is a visual feast. Red Riding Hood is sumptuously designed with stunning costumes and sets.

Don't expect historical accuracy. Do expect a fairy tale quality with more than a dash of sinister thrown in. 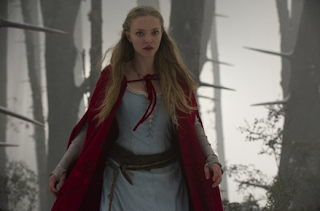 The film stars Amanda Seyfried of Mamma Mia and Letters to Juliet fame, and the back up cast is phenomenal: Gary Oldman, Billy Burke (also the dad in Twilight), Lukas Haas and Julie Christie. And for those who enjoy their eye candy (like me!), there are two rather attractive young men to ogle: Shiloh Fernandez and Max Irons (son of Jeremy).

Interestingly, Shiloh Fernandez made the shortlist for the role of Edward Cullen in Twilight. He has a remarkable resemblance to Robert Pattinson, though without the squashed nose. I would have loved to see him in the role, but since that's never going to happen, I'll take whatever I can get of him! 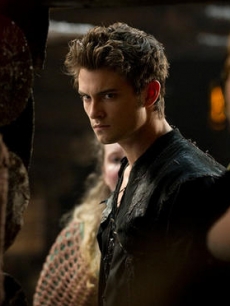 As for the movie itself ... I loved it. Just the right balance of drama, action and romance for my tastes - and it's beautiful to look at! Go take a look for yourself.

I love the style from the pictures Romy, will keep an eye out. What a terrific cast. And I agree - very RP.

I saw this movie and what really disappointed me was the dialogue and the accents, it was so clunky it overwhelmed the actual story and visual... you know how you notice one thing and thats all you see from then on...