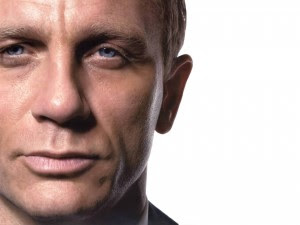 I was lucky enough to attend the New Voices competition workshop run by Heidi Rice last Friday and I thought it was interesting how often media images, actors (including Daniel Craig, left) and programmes were used either as tags for certain series or as thinking material for character conflicts.
So watching Desperate Housewives or The Mentalist may actually be good for your writing career, it's official :-)
Actually, it was while watching an episode of The Mentalist that I got a really good lesson on how to show a character's conflict th 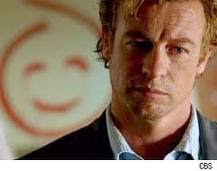 rough action, rather than introspection or dialogue. Even those of you who aren't fans probably know the basic story-line - Patrick Jane (played by Simon Baker) lost his wife and child in circumstances he can never forgive himself for. Finally at the end of series two we see him on his first date since they died. He leaves to go to the bathroom and once out of his date's sight his face instantly darkens, we don't hear him utter a single thought to anyone but after watching him pace, sweat and then finger his wedding ring we're in no doubt about his inner turmoil. And his character has been set up so well we know exactly why.
Just looking at the room he sleeps in shows us he won't forgive himself for what happened (see below) it's an extremely powerful image... 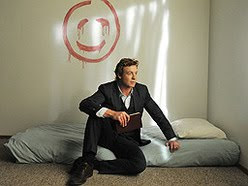 Since I've joined the Minxes I've been trying hard to get my telling under control and show instead and watching this scene challenged me to really think about how my characters move and what I can show through their actions, or indeed their rooms and offices.
Happening to like Simon Baker is purely coincidental to this lesson but if you'd like some homework and live in the UK you can view the scene I describe for yourself for free via Five on Demand
Seeing as it's Friday I've brought some more pictures to my show 'n tell (Henry Cavil, Gilles Marini and Carter Oosterhouse) Please feel free to study intently for research purposes ;-) 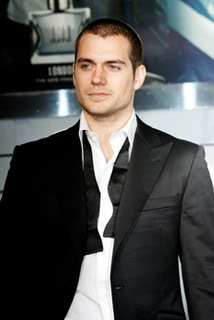 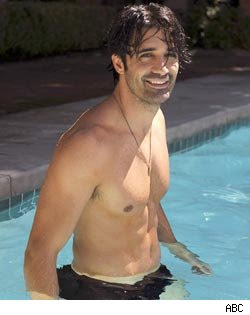 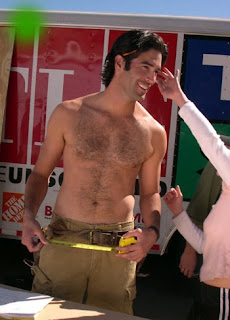 A most pleasant totty fest and no mistake!

Thanks so much for your pictures. I disagree with your Twitter comment. They were soooo necessary. You had my current fave in there.

Bet you can't wait to get to Brothers & Sisters series 4 when the rather scrummy Gilles joins the cast!

And also, great insight into conflicts too. I had similar lightbulb moments this week watching 'Overboard' of all films.

Okay that Gilles fella is the spitting image of the hero I'm currently writing... I mean, what are the chances!!

People don't like The Mentalist? What is this?! You have to love Patrick. Actually I think the major draw for me is the internal conflict. His character is fascinating especially when they're torturing him, nasty writers ;-)

Carter is my inspiration for Bound to Love hero, Jake Forrester. They're all pretty inspiring actually...sigh

Oh dear Lord, er, I mean, very great post, Lorraine! Henry Cavill *sigh, sigh, SIGH*. He's probably the only man I'd leave my husband for! I remember that scene from The Mentalist and you've described it so beautifully. Now if I could just translate onto paper (computer) I'd be one ecstatic Minx!

There seems to be a lot of sighing going on! Back to work people (but you can take some...inspiration away with you! ;-)

Can I just pick one please? This is show and tell isn't it? And we get to try before we buy?
Whoaaa! If only...

Very thought provoking post. Thanks for a great start to the weekend!

Since I wasn't paying attention in class the first time, I'm back for another *ahem* lesson. Now which one's the teacher again?

Did you say something Lorraine? I was too busy staring at Gilles Marini to notice. ;o)

Great post, it makes me want to find the mentalist and watch it from the beginning.

Just checking in for my daily fix, err I mean, checking for research purposes, (fans herself) um, yeah...

I was about to accuse you of being an inattentive lot but given the material I gave you I have only myself to blame ;-)

Do watch The Mentalist - it's fab, like Lacey says I can't understand people not liking it, the drawing and progressive revealing of the characters episode by episode is masterful.

Thanks for stopping by everyone. We have some future Friday treats for you with guest bloggers Sue Moorcroft and Kate Hardy. Plus our newest Minx, Joanne Pibworth will be blogging on Monday...