Today the Minxes are so very thrilled to have with us fellow writer and friend, Maisey Yates. For those who aren't aware, Maisey is one of the newest authors to be initiated into the Harlequin Presents stable and we shared her excitement when she received The Call a mere eight months ago. Since then, she's sold a further 3 books and is already writing her 5th, we believe!

So without further ado...Maisey Yates!

Five years ago I'd never finished a manuscript. I'd never read a romance. And I couldn't even imagine finding the courage to finish a story, because then..I might have to submit it. I had dreams of being a writer one day, but I never really believed that that's what I would end up doing.

2. Where did you get the idea from for this particular book?
It came from the heroine Elaine. I sat down and started writing, and there she was, proposing to the hero. She's a strong woman with a mind of her own, and she definitely had her own ideas for how her story was going to go.

Writing Presents, raising my kids, loving my husband...maybe in a slightly larger house.

That's tough, because there are a lot of moments in a lot of books that make me say "WOW! Why couldn't I say it that way??" But, I just read Flowers From the Storm by Laura Kinsale and I had to wonder where that story came from. It was just so deep and emotional. I had some serious writer-envy there.

5. Was there any particular author or book that made you want to be a writer?

The first Presents I read was by Miranda Lee. (and I can't remember the title...so...if anyone want to talk after class and help me figure it out...) When I read that book, and all the passion and drama and emotion, everything clicked into place for me. I knew that was what I wanted to write.

That's hard, because my husband is kind of a paragon. I have the most perfect wedding picture of him standing at the head of the aisle just when he's seen me for the first time and he has tears on his cheeks. But, I think that him bringing a bouquet of roses to my first pre-natal appointment when I was pregnant with our son wins.

8. What do you wish you'd known about being an author before you were pubbed?
I don't know very much yet! But I will say: take it all in stride. It's amazing, and I'm having the time of my life, but no doubt there will be low points, more revisions, rejections, bad reviews. And then there's exciting things like good reviews and release days and covers. Even with all of that, good and bad, you have to just keep writing. 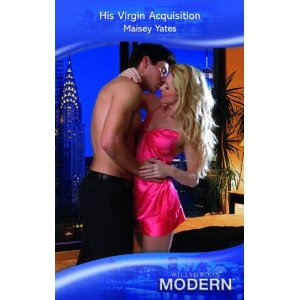 
In His Virgin Acquisition, Elaine Chapman is willing to do whatever it takes to get her father's company...even if it means offering marriage to the man who just purchased the company, Marco De Luca. She's got everything planned, and she presents him with an offer he can't refuse. Of course, not everything goes according to plan...she hasn't counted on actually being attracted to her new husband... 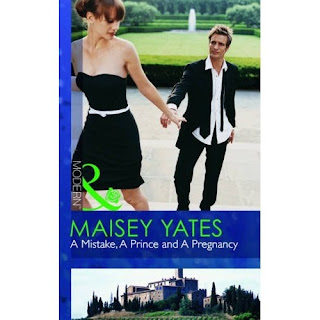 11. What’s next for you?
My next release, A Mistake, A Prince and A Pregnancy will be out in the UK in October. Imagine my hero's shock when a woman he's never met comes to tell him she's pregnant with his baby...
Thanks you so much for blogging with us today, Maisey, and for giving us a sneak peak at the new Presents covers! :)
Posted by Maya Blake at 8/04/2010 09:18:00 AM

Hi Maisey! (waves) great to see you here on the minx blog today, great answers. And your romantic moment, Awwwww!

Yes indeed, we're thrilled to have you here, because you can also dish some goss about your 1st RWA conference, no? ;)

Fab answers Maisey. Your romantic moment is definitely a winner - now going to show it to my DH!

I LOVE the new cover! Thanks for answering our questions Maisey :-)

Maya...I can dish! :) Nora Roberts was the keynote at conference this year...she's beyond inspirational! And...a little hint...The New Voices comp was big news and I would say it would be quite beneficial to enter! Also, the biggest and bestest thing I took away...the editors are sweet, lovely people who really aren't that scary. Not even a little scary, actually. I had such a fab time getting to know them...and getting my editor to say trash can rather than rubbish bin. She does a fantastic American accent.

Susan, yep! He's the reason I write romance at all. Without him, I wouldn't know a thing about it!

Lorraine, the new cover is *amazing* I got the chance to see it physically at conference and I was blown away! Also, got to read the cover copy...and I wish I could remember it! LOL.

Also ladies...if you want more conference goss...I just did a post on the Harlequin party on my blog!

YAY Maisey! I am applauding you from afar, hope you can feel all the good vibes (I mean that in a non-new-agey way) I send to you. You give me hope and I've enjoyed watching your journey - & can't wait to read your first book!

Jenny, thanks so much! That's such a lovely thing to hear!

Jessica, thanks dahling, I accept your non-new agey good vibes. I can't wait to read your first book either. Name it and claim it, baby!

Great answers Maisey. It's so good to "see" new authors out there. Can't wait for your new book BTW. And the new covers are great too. Caroline x

I bought Flowers from the Storm based on your suggestion. Now I just need to read it!

I like the direction M&B is going with the new covers. Wish they were doing the same in the States.

Thanks, Caroline! It's nice to be out there! :)

Abbi, I agree, but it's my understanding that the US is such a huge market, and things are going so well here, that changing anything is probably a bigger gamble than it's worth. Expect to see new titles though! My Feb 2011 release is part of the first wave of new titles. It's called The Inherited Bride.

Hello everyone!
Hey, Maisey! Thanks for sharing your experiences with us.
A hug from the States, and best wishes with everything.

Hey there, Miz Maisey! Love to see those covers up again! Must go and hunt out Laura Kinsale...

Your hub is definitely a romantic hero, Maisey. What a guy!

Love hearing more about you and looking forward to getting into your debut book. Picked it up at a big Tesco superstore today. Still mad it wasn't in my subscription pack ...

Thanks for interviewing with the Minxes today :-)

Joanna, nice to "see" you here!

Jo, you won't get the next one either. Only subscribers who get eight get mine. Boohoo!!

Aww isn't your husband such a sweetie? No wonder you write romance!

It's true! That first book is dedicated to him...and the Sassy Sisters, natch!

And I have to admit for the first time since we 'met', you've managed to actually shock me. I appreciate the credit on that re-write question - I seriously wasn't expecting that at all - but believe me, it's totally misplaced. That ms was a cracker to start with, and it's down to your talent and your so-Presents voice that's got you to where you are now - deservedly so, I might add :-)

oh dear heaven! I've shocked a Jilly! what has the world come to? But you were the one to give me that reality check...rewrite ahoy! And now...I fear no rewrite.

Sorry Maisey, I'm running horribly late as usual. And I've got to say your lack of fear when it comes to rewrites (and revisions) is inspiring. Now if only it was catching :-)

I am even later, I seem to have lost a couple of days! Great to have you turn minxy for a day Maisey, love the new covers. You are an inspiration!

Robyn, you know I fear them for a while. But I can sook in one corner of my brain and write with tne rest.

Joanne, I understand. ;) Just keep going and you'll get here too! You've already come so far, so fasy!

I'm even later than Robyn and Jo. In fact - I'm horrified to see just how late. Am ashamed of myself.

Great answers, Maisey, thanks for popping by - and LOVE that cover.