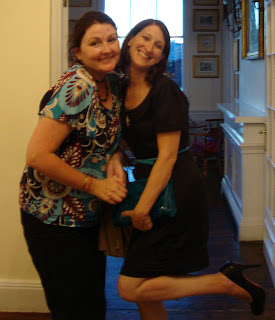 This week we're delighted to welcome our first guest blogger, and firm Minx favourite - Julie Cohen. Her Harlequin Mills and Boon and Little Black Dress titles have a guaranteed place on our keepers' shelf and 'GIRL FROM MARS' Recently won an Award of Merit in the HOLT Medallion. Come back to the Minx blog on 13th of October to hear about her new release coming out with Headline - 'GETTING AWAY WITH IT'

(Check out the photograph with Jo Eustace if you want to pick out Julie from the shoe line-up on the RNA blog!)

The RNA conference
Every time I’ve gone to a Romantic Novelists’ Association conference, it’s changed my life. Take the first one, for example, in Durham in 2002. Though I’d been chatting with some other RNA members on the net, and made good friends with some of them that way, I’d never met any of the people there in person. I’m pretty sure I’d never even met a published romance writer in person. And yet there I was, arriving late, halfway through dinner on the first night, into a room full of loudly chattering writers. I was terrified. What if they were all so brilliant they wouldn’t talk with me? Who was I to say I could write at all? I was unpublished, clueless, and had only ever been rejected.
I was greeted by cheers and waves and hugs from my online friends. And it got even better from there: I met published writers, experienced writers, other newbies, all of them friendly and generous. I got down on my knees and asked my online buddy to be my critique partner. I walked along the river and saw the cathedral. I drank too much wine.
It was wonderful.
The following year, in 2003, I was drying my hands in the ladies’ room when the organiser of the New Writers’ Scheme came up to me and said, “I hear your manuscript submission this year was really good. You should send it to this agent.” Then she gave me a card. I had never, ever been told by an impartial stranger that my work was any good. I nearly cried. Then I drank too much wine. 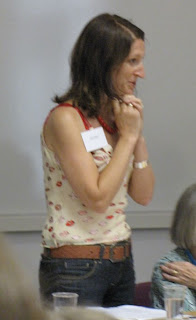 By the time of the Leicester conference in 2004, I’d acquired an agent, but I was still unpublished. But, basically because I am unembarrassable, I was giving the first workshop on writing sex scenes that the RNA had ever hosted. I’d done two interviews with national newspapers because of it, and another national profile piece and a television appearance would follow. And me, still an unpublished writer. Because of the RNA. That evening, after the workshop was over, I drank too much wine.
Two weeks later, I’d sold my first novel.
Then there was the first conference as a published author. The first where I actually got to sign books. The time where we all cried because our friend was told by an editor that her book had been bought; the time where we all cheered because a dear friend had placed in the Elizabeth Gouge award and then walked across a field barefoot, swigging champagne. The times when someone tells me I’ve managed to help them in some way, which is the best feeling ever. There were the shoes and the toasts and the workshops and the naughty kitchens and the meetings with editors and agents and the chance conversations with people whose books I love, and people whose books I am going to love, just as soon as they get published so I can read them.
This year, in Kate Harrison’s workshop, she told us to set ourselves three achievable goals to improve our writing life. I started work on them the day after I got home. Other members helped me with research questions, with inspiration, with encouragement, with finding direction. And oh yes—I believe I drank too much wine.Mostly, I’ve made friends, and friends are what you need in this business, to fight the crows of doubt and the solitude and to celebrate the successes. Oh, and also shoes. And maybe just a teensy tiny little bit of wine...

Julie’s latest book is NINA JONES AND THE TEMPLE OF GLOOM, available with free shipping here:http://www.bookdepository.co.uk/book/9780755341412/Nina-Jones-and-the-Temple-of-Gloom
Her website is http://www.julie-cohen.com, she’s on Facebook as julie.cohen.author an
d her Twitter ID is @julie_cohen.
Posted by Lorraine at 7/16/2010 08:30:00 AM

Lovely to meet you, Julie!

Oh Julie - you've made me go all weepy!
lx

It was lovely to meet you too, Jane! Excited about your new venture.

Liz, that's one thing we never did all weekend—cry! I didn't, anyway. Which is unusual as I am normally v. sentimental at these things. Glad you've made up for it now tho. :-)

Great post, Julie! Lovely to see you here, the MAC (minxes at conference) all report you're as lovely in real life as you are 'virtually', so sorry to have missed the chance to meet you, as I haven't made the conference yet, but definitly going next year! It sounds fab!

Lovely to see you again, missy but sorry we didn't get to talk very much! Next time, we'll have to remedy that...oh, and drink too much wine!

Rachel x
PS: Thank you for your kind comments about my writing in front of Jean, you are so LOVELY!!

It's so great to see you here, Julie. As Sally mentioned, the MAC gave a very glowing review of the RNA conf and of you, so those of us who couldn't be there feel much better. I feel so blessed to have met the Minxes myself so your post about making friends really struck a chord! Oh and the drinking too much wine, too ;)

Maya *who's nursing a humongous hangover from the office summer party last night!*

Sally, you must go next year. I think it's in southern Wales next year, how exciting!

Always great to see you too Rachel. And it was only the truth. :-)

Thanks Judy...and you know the Hair Disaster so I'm glad you like it now, LOL!

*very quietly to Maya* Hope you feel better soon and thank you for having me here. This year was an epic conference and it was wonderful to see everyone and meet new people too.

Thank you for posting for us Julie :-)
This year was only my second conference but I already can't imagine missing one. Virtual friends are lovely but actually meeting them in person is the icing on the cake...

Fanstatic post, Julie. Wish I could have met you at the conference, but unfortunately I was unable to go to this time...maybe next year.

I loved your workshop Julie, it was inspiring and fun, even without the wine!!

I'm with Sarah - the workshop was fab and SO helpful! Lovely to meet you!

Thanks for posting, Julie. I saw you across a crowded courtyard this conference (I was only there for one day, unfortunately!). Sorry I missed your talk, it has had glowing reviews :-)

Thank you for inviting me, Lorraine! :-) I agree, as good as the internet is, there's nothing quite like meeting other writers in real life (if only for the wine).

Suzanne, I hope you can make it next year, or soon.

Sarah and Talli, I'm glad you enjoyed my workshop—especially as you did all the work.

Yes, I saw you across a crowded courtyard too, Joanne. Hope you had a brilliant time, too.