While some of us are going through RNA conference recovery, I thought it would be fun to blog about two of my favourite things -- buff men and football :-)

So, for those who have somehow managed to miss the hype -- what's it all about? TheWorld Cup is 14.2 inches high and made from 18 carat gold and weighs in at 13.6lb so is a relatively little thing that footballers have put their heart and soul into winning over the last 6 weeks. And who among us doesn't love a man who will put their all into something they are passionate about? 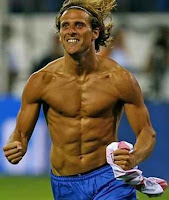 So perhaps we should look at some of those men? For purely research purposes only -- to examine the type of man who spends hours training his body into a fine machine all in the name of football.

Of course, it is important that the men who take part in the beautiful game are fine physical specimens. Our first study is Uruguay's Diego Forlan. I'm sure you'll agree, he looks as though he trains very hard for his sport :-)

Next is one of England's most hated men, Portugal's Cristiano Ronaldo. For those who don't know, he rolled around on the floor as though he'd been sniper shot in the last European Championships and tried to get his then Manchester United team mate, England's Wayne Rooney sent off. It worked. The Englishman was sent from the field of play and English hearts were once again broken as the team crashed out of the tournament. Hence general dislike for Cristiano who the lovely Maisey Yates assures me is still well worth looking at!

Next for your viewing delight we have a few hand picked members of the Italian World Cup team. Unfortunately, they did not hang around the tournament for too long this year. But they did manage to leave a pretty lasting impression on some female fans. Can anyone see why?!

It's only fair my own nation is featured in this blog post. I've chosen one of the lesser known members of the English squad. We've all seen pictures of Wayne Rooney, Steven Gerrard and Frank Lampard so let me introduce, for those who haven't seen/heard of him, Liverpool and England's Glen Johnson. He's incredibly pretty but unfortunately it seems he's a little shy as I couldn't find an image of him unclothed. I do apologise, blog readers, must try harder ... I know!

There's been some chatter on Twitter regarding the teams and their players. Whilst I've favoured the Spanish, some have grumbled that they are a little short. So, especially for those who prefer tall men, Jackie Ashenden, here we have Holland's Wesley Sneijder. Again, he seems a little shy and there were no easy to find 'shirt swapping' pictures so I hope this one will do! 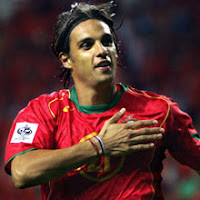 Next is Portugal's Nuno Gomes. For those who saw the 'Presents Hero' picture Maisey had on her blog a week or so back, I'm fairly certain this is one of the men featured. 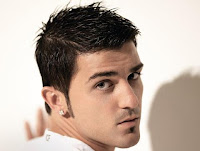 Finally, it wouldn't be fair if we didn't finish with a player from the winning team and arguably the player of the tournament. Well, I think he was the best player in the last 6 weeks and it isn't just because he's incredibly cute ... honestly, it's not! Spain's David Villa.
While I'm devastated the World Cup has now finished, it may mean better things for my WIP. I'm thinking now I don't have the distraction on the football and Wimbledon my word count will start to soar. Let's hope so ... I have a requested partial to submit!
Posted by Joanne Coles at 7/12/2010 10:58:00 AM

Excellent post Jo. And with the last sentence, she strikes, she SCORES!

Loved your post Joanne!! BTW did you spot that extremely tasty Spanish defender with the pure blue eyes and sculpted cheekbones in the Final? I was wondering where they'd been keeping him hidden and not just in a footballing sense.

Have to say as an England fan meself I've almost forgiven Ronaldo for his playacting at the Euro 2008 Finals, given Wayne's performance at this years finals I think he might actually have been doing us a favour!

Am so gonna miss all that football (and buff football players) in my living room!

Thanks, Sally and Heidi.

It was very hard work, but I take my Minxy responsibilities seriously ;-) I trawled through google images to find the player Heidi referred to.

Joanne, you are truly dedicated. *swoons*

Lol! Joanne, yep, I loves me some tall men. ;-) But not ones who 'simulate' like Italians I have to say. Anyway, did you know that the All Whites (that's the NZers guys) were the ONLY unbeaten team in the tournament?? I thought that was hilarious, given our general uselessness at soccer.
Anyway, I'm with Heidi, I'm going to miss the football too!

Lovely post, Jo. And thanks for all that conscientous research!

Jesus! What a great name, don't suppose I'd get away with that for a hero though somehow....