Today we're very excited to have Cindy Davis answering the Minx questions. Cindy is of course, a very talented editor as well as an author, and previously featured on the Minxes blog, telling us all about how to do the perfect synopsis. Take it away, Cindy!

Where were you in your writing career 5 years ago?
At that time I was focused on attending as many conferences and workshops as possible. To learn as much as I could. I made sure to introduce myself to every editor, agent or publisher I met, regardless of their genre. One time, I introduced myself to an agent in a ladies room waiting line. You never know where an opportunity will present itself.

Where did you get the idea from for this particular book?
Funny where ideas germinate. Play with Fire is the second in my Angie Deacon series. I am a gardener. I thought it would be interesting to have a precious flower stolen. I emailed three of the world's top iris breeders and asked for info on their most expensive iris. One breeder phoned me, laughing because their most expensive flower was $50. But, he had a great idea for a plot: in reality, there's no such thing as a red iris, they don't carry a red gene. Iris breeders have spent millions, literally, trying to produce one genetically. In Play with Fire the character does produce a red, but before he can take advantage, all his work is stolen and he's killed.

Where do you hope to be in 5 years time?
On the best seller list! Grin. It's a long shot but they say to shoot high and don't take no for an answer. More realistically, I see my editing career moving to another eschelon. I have done some teaching at conferences and I'd like to see that go further. There are some tutorials on my website: http://www.fiction-doctor.com./

Which was the last book you read that you wish you'd written?
Anything by Lee Child. I don't like his sentence structure; as an editor it makes me cringe but his plots are unique. There's something new on every page. I also find Sandra Brown's mysteries to be like that. (Don't care for her romances though)

Was there any particular author or book that made you want to be a writer?
I guess my love of writing comes from the Nancy Drew series, and anything by Agatha Christie. Agatha was another author with tremendous variety in her stories. I always loved puzzles--most of the time figured whodunit before the sleuth.

Do you find writing love scenes giggle-worthy or cringe-worthy?
My first drafts are usually a good bit of both. There isn't much in the way of love scenes in a mystery series. Readers have told me that's not what they want from a story. Then again, I think it's realistic to assume there ARE love scenes, so mine tend to be short and to the point. Like Angie and Jarvis' first time in Play with Fire: Jarvis kicked the door shut and shoved her back, thumping her head on the panel that vibrated to the Stones. His first kiss stifled her gasp of surprise. He leaned in, crushing her breasts with his chest. The thick bulge of the prop gun pressed into her hip. And became the most erotic sensation she'd—his tongue drove deep in her mouth—ever experienced. As the final pulse-pounding beat of Wild Horses shook the walls, Colby Jarvis rode Angie with the pulse-pounding fury of a stampede. For several scenes afterward, Jarvis berates himself for treating her like that, and every time Angie thought about she wanted to buy Stones albums.

What's the most romantic moment of your life so far?
I am married to a black and white kind of guy who never sets up romance on purpose. That said, romance can come in unique and unexpected places. We had the best picnic, at dusk, in a small boat on the Blackwater River in northwestern NY state, anchored under an overhanging tree... I will someday use this scene. But not in the mystery series, Angie hates the water.

What do you wish you'd known about being an author before you were pubbed?
How hard it was to find a truly good small publisher. I was first pubbed by one of those small presses who began solely as a means to get the owner's books published. She knew nothing about the publishing world, art work or editing. She hired a printer who knew nothing either. My first books had awful art and glue on the covers. Since then, small presses have come a long way, but ones like that gave small pubs the bad rep.

What's the best writing advice you've ever been given?
Write write write and pay attention to critiques from your elders. If somebody says something's wrong with your story, really stand back and evaluate. And here's some advice from me: never never turn in a first draft manuscript. I can't tell you how many people do that. They query a publisher with about a third of the book yet to write, then when the ms is requested, scurry to finish the last chapters.

Tell us about your latest release.
That would be Play with Fire I mentioned above. Angie and partner Tyson Goodwell have just opened a community theater, the culmination of a dream. The murder happens on stage of their first production--and the murderer is none other than Detective Colby Jarvis. Angie investigates in order to clear him.

What's next for you?
Two things. Book three of the Angie Deacon series will be out in August. In Hair of the Dog Angie is on vacation. For three nights she's kept awake by a dog barking. She finally confronts the neighbor publicly. As mysteries happen, he's found dead the next morning. To clear herself she follows clues to a makeup factory and a dog show. Not surprisingly, the two turn out to be related.


Secondly, I am writing a romance. Yes, in Finding Cassidy I will be writing a love scene, or three, though there will be no Rolling Stones. Cassidy Scott, an actress being stalked by a fanatic, takes a leave of absence and rents a bungalow in a small NE town. She meets two people: Arlen, a teen who's an aspiring screenwriter (naturally, he thinks he recognizes her), and his friend and mentor, Kirk Blackwood, a reclusive artist who reads a note on Cassidy's counter and concludes that Arlen is all wrong—Ms. Scott is a serial killer. As her relationship with the artist smoothes out and moves along, the stalker arrives in town. 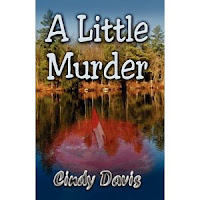 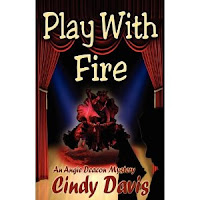 These sound great, Cindy. Love the sound of your heroine and thanks for the author spotlight!

Lovely to have you here today, Cindy. Your books sound intriguing and there's nothing quite like a great whodunit, is there? Thanks so much for the great advice.

I love your straight to the point love scene, btw. Although short and, well, to the point, it certainly does pack a punch ;)

Great story about how the iris plot came to be Cindy, and love the romantic boat picnic, although I know that if I attempted that I'd end up in the water!
Will look out for your books, the Angie Deacon series sounds like a really good read.
x

Thanks all. Writing is great fun and so satisfying--most of the time.