Rebecca Crowley is a truly international author - an American who's lived for many years in London and who has recently moved to South Africa. (Welcome, Rebecca!) She is in our spotlight today to talk about her debut novel through Carina Press, The Striker's Chance.

I’m originally from Kansas, but I’ve stretched my small-town roots all over the globe. I went to college in New York City, then I spent six years in London, and in July I moved to Johannesburg – three continents down, four more to go!

I’ve been a huge fan of the romance genre since I was old enough to leaf through the Harlequins my mom had lying around in the car. My first attempt to write one was a shockingly bad historical when I was sixteen, but hopefully I’ve improved since then!

This is my exciting debut! But I have a holiday novella releasing with Carina Press in November and a romantic suspense due in March from Samhain Publishing, so I can say with some authority this is the first of at least three.

Given how many times I sit down to write and look up an hour later to find I’ve watched fifteen stupid videos on YouTube but haven’t even opened the Word document, I feel like the last person who should be giving advice on this!

I aim to write 1,000 words per day, mostly during the ninety-ish minutes after work when I have the house to myself, before my fiancé gets home. Does it always happen? Absolutely not! But my primary motivator seems to be guilt, and I know that once I lose momentum on a story it’ll be hard to plunge back into it, so I push myself to write to avoid that nagging sense of obligation to my characters.

Again, promotion is definitely not something on which I’d consider myself an expert – on the contrary I think I still have a huge amount to learn. In that vein, the most valuable tip I’ve discovered in my fledgling career is to network with other authors. At first I was totally intimidated by what I perceived as people who were way beyond me in terms of success and seniority, but they’ve proven to be phenomenal resources when it comes to publishing, promotion, and the general day-to-day of life as an author.

Personally my primary networks are ROSA, the oragnisation for South African romance writers  and the Contemporary Romance Café. Both are fabulous, creative, supportive communities – check ’em out!

I don’t fit writing into my day, I shoehorn it! Between the commute, the full-time job, my masochistic love of middle-distance running, and that annoying habit of interacting with my fiancé, writing often takes a backseat to real life – but the characters and stories are always simmering away in the back of my mind, and on rare occasions I can get whole scenes worked out so fully in my head that it takes no time at all to transfer them to the page. Like all authors I dream of the day when my sales will fund a full-time, three-thousand-words-a-day lifestyle, but until then I have to make do with stolen half-hours and hastily scribbled paragraphs.

6. Keeping fit: Do you have an exercise regime to counterbalance all those hours sitting at a computer?

It’s probably no surprise, considering my debut is a sports romance, that I love to be active and keep fit. I’ve been a committed middle-distance runner (10K to half-marathon) for several years, I’ve recently gotten into obstacle runs, and I’m hopeful that moving from London to Johannesburg will give me far more opportunities for cycling, hiking, and general outdoorsiness – as soon as I acclimate to the city’s mile-high elevation!

I realize that running and writing seem like completely disparate activities, but for me they work together perfectly. If I’ve hit a writing roadblock, nothing clears my head and helps me untangle plot kinks better than going for a run. And if I’m struggling with my workout, feeling like I want to slow down or quit altogether, I distract myself from the pain by focusing on what to do next in my WIP. On the best days I come home with a fitter body and a better novel!

Anyway, enough about me – let’s talk about the book!

7. What was the most fun part of writing this book?

8. Just for fun: a year from the end of the book, where would your couple go on holiday?

It might take her less than a year, but Holly would definitely need to visit Kepler’s family in South Africa. He’s from Port Elizabeth, so I’m thinking they’d spend Christmas with his parents, then roadtrip through the Garden Route to spend New Year’s in Cape Town. I’m envisioning a luxury hotel, sweeping views of Table Mountain, several bottles of Stellenbosch wine… and then maybe a diamond ring?

9. Could you be friends with any of your heroines?

Definitely! I hope that my heroines are true-to-life in that they’re complicated and flawed, but ultimately likeable and even admirable. I love the authenticity of heroines who don’t always understand themselves or their own actions, because what woman does? There’s nothing wrong with a heroine who has all the answers, but I personally prefer those who haven’t even figured out the questions.

10. At what point in your career did you actually start to feel like you were a writer?

To be honest, I still feel like a fraud most days, especially when I look at other authors whose sales have enabled them to transition into full-time writing, or when I read a novel that leaves me openmouthed at how well it’s written. But then I think complacency is probably the biggest enemy of creativity, so I don’t mind staying on my toes! 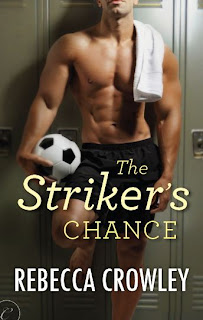 Landing the PR contract for North Carolina’s new soccer team could take Holly Taylor’s career to the next level. Her task? Make Kepler “Killer” de Klerk, an athlete with a party-hard reputation, a star. But revamping the sexy footballer’s image while battling her unwanted attraction to him is easier said than done.

The car accident that derailed Kepler’s European career also gave him some much-needed perspective. He’s ready to give up on fame and focus on the game he loves. The last thing he needs is a headstrong brunette pushing him back into the spotlight, even if butting heads with her is the most fun he’s had in ages.

The more time Holly spends with Kepler, the more she sees how different he is from his tabloid persona. But when she’s offered her dream job for a price, she finds herself torn between the career she’s spent years building and the man she doesn’t want to give up.

The Striker's Chance is available from Amazon, Amazon UK, All Romance eBooks and direct from Carina Press.